Seeing the empty shelves at the Salvation Army food pantry, a shipping company manager called some of the truckers he had to lay off back to work. 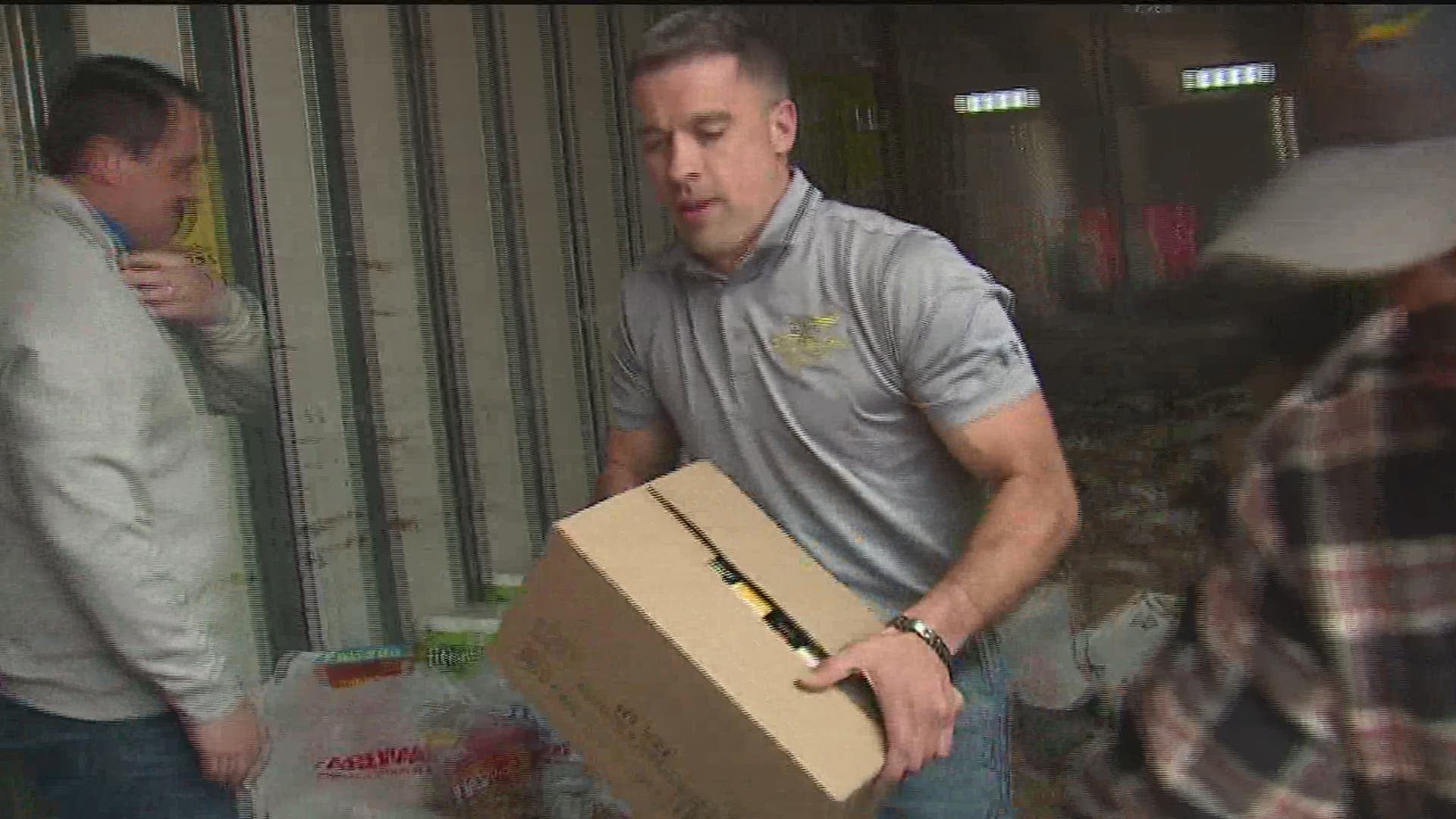 MUSCATINE, Iowa — When executives at TanTara Transportation Corp., a Muscatine shipping company, heard rumors of empty food shelves at the Salvation Army's food pantry, they sent David Riggan to check it out.

Riggan, the company's director of personnel, took one look.

"Wow what happened here?" he thought.

Just a few boxes of corn and green beans, but shelves upon shelves are bare.

"That’s basically it, empty boxes, where food would have been two months ago," said Lieutenant Greg Bock, commanding officer of the Salvation Army in Muscatine.

Staff at the pantry say it's a sight they haven't seen in 15 years.

TanTara and the Krieger Auto Group hold an annual food drive in the fall with partners like Hy-Vee and Blaines Farm and Fleet. Typically they are able to bring in enough food donations to last from eight months to nearly a year.

To meet the urgent need, the companies got together and decided to hold the food drive now.

"We typically do them in November and December," Riggan said. "It's uncommon ground for us to be doing a food drive in May."

The Riggan family has felt the impact from the pandemic too.

"Our company has taken a huge hit due to this COVID stuff. We had at one time, 30 percent of our employees laid off," Riggan said.

Seeing the need in the community, he put two-and-two together.

"We were able to bring 10 truck drivers back to work and brought them off this layoff, to work this food drive."

RELATED: How you can help replenish Muscatine's food supply for those in need

Truckers like Tandy Moggle, who has been with the company for nearly four years.

"With lack of work I was partially laid off for a while so we’re getting me going again by having me help with this food drive," Moggle said.

He said he wanted to help, because "There’s a lot of people that are in need of food and are hurting."

On Wednesday, he was out in front of Hy-Vee, handing out brochures to shoppers and explain to them how they could help fill the Hawk Hauler with groceries, receiving bags brought out by shoppers, and taking cash donations straight to the Salvation Army kettle.

"Even at one point today, they were a bit desperate, they brought the van, I helped them load that up with some things that they could instantly use to help the people," he said.

The Hawk Hauler had been out since Friday, steadily getting filled with paper bags and cartons full of food, but on Wednesday, Lt. Bock had to bring the Salvation Army van to take some food off the hauler just as soon as it was donated.

"Between when our food order that comes in next Monday and the food vans that had to go out today, and the mobile food pantry, we didn’t have any food to give out!"

At a time when food insecurity and unemployment is at its height, Moggle said he would have volunteered to help, but it was good feeling to get paid. Moggle said he even donated some of his pay back.

"Whenever someone is looking out for your best interest, when it’s tough for you but it’s tough for them too, it makes you want to go the extra mile, and be there for them anytime in the future."

For Riggan, the food drive has come full circle.

"It helps us out by bringing our employees back to work," Riggan said. "It helps our employees out by giving them a paycheck. And of course it helps out the community by stocking the food bank."

Since Friday, he estimated that the drive has brought in $8,000 in food and cash donations.

The Hawk Hauler and food drive will be at Hy-Vee through midday Friday, May 15. Over the weekend, it will be at Blain's Farm & Fleet.

Next week it will be parked at Fareway Grocery.