This beast is 16 pounds and is made to serve 12 people – but if you had to tackle it with just one person, who would it be? 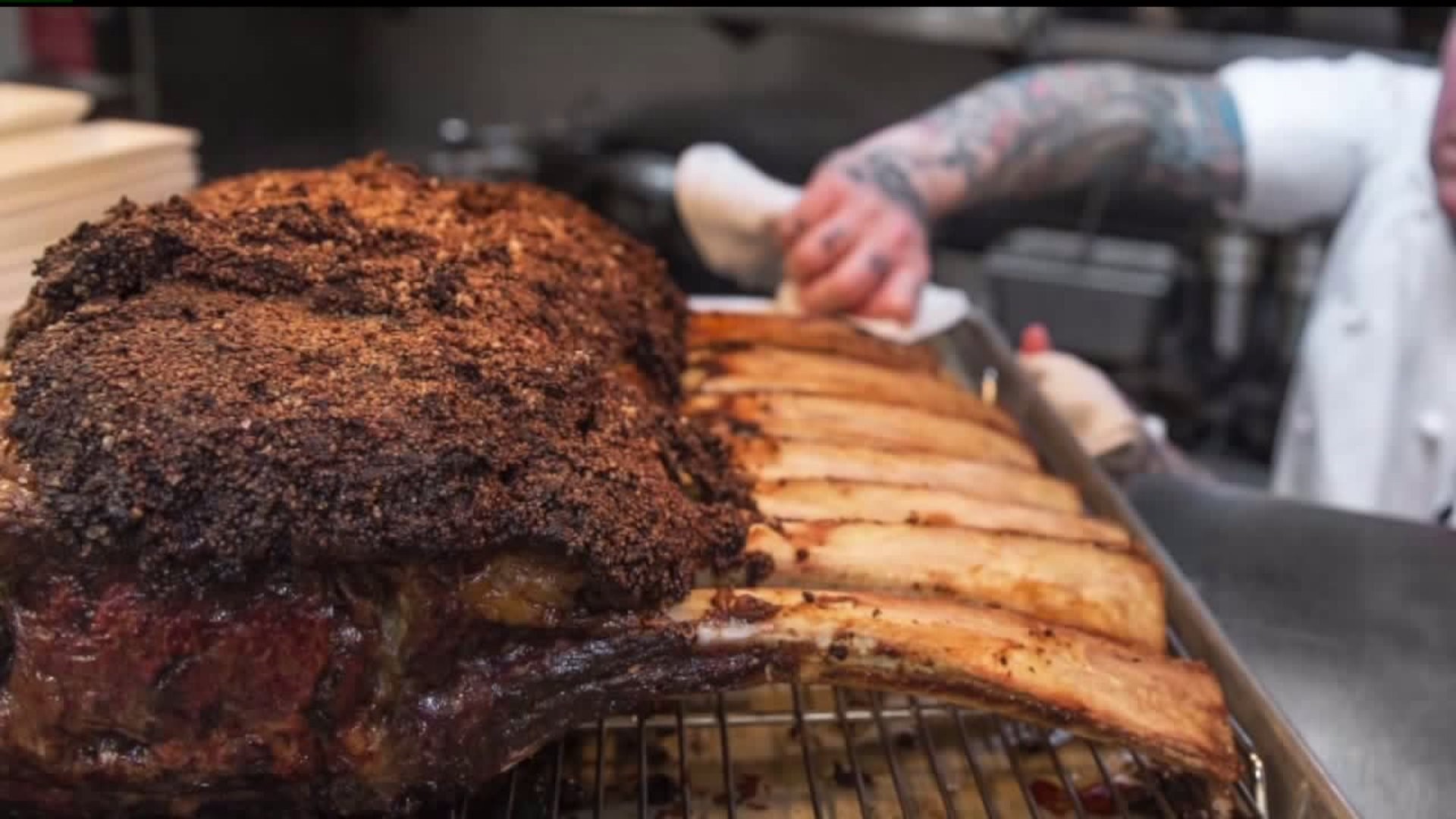 Love it or hate it, share-plate dining is far from over. But dwindling are the days when tapas and small plates monopolized the category and each diner was encouraged to order five to six items.

Making waves today is large-format dining. From whole fish to whole roasted duck to steak for two or more, the new way of sharing food may have reached its pinnacle with a $1,200 tomahawk available in -- where else -- Las Vegas.

At MB Steak inside Hard Rock Hotel and Casino, this dry-aged, seven-boned tomahawk serves 12. Unlike your average steakhouse steak order, however, sides are included, making the hefty price tag for the 16-pound ribeye at least marginally more digestible.

Along with the massive cut of beef, tables are served an assortment of six decadent side dishes including lobster mac and cheese, creamed corn with king crab and roasted poblano, maitake mushrooms with aged goat cheese and creamed spinach with a poached egg and truffle gouda.

Chef Patrick Munster says one to two "Feasts" are ordered each week -- and the extra-large cuts must be pre-ordered as the restaurant requires advance notice to obtain the USDA Prime meat sourced from Nebraska. As is widely publicized the tomahawk can be enjoyed by up to 12 people, but Munster says he once served it to a table of eight, and the group finished it all.

MB Steak is owned by brothers David Morton and Michael Morton, part of Morton Group. The restaurant bills itself a "luxury steakhouse" though by many people's definition, steakhouses are already luxurious by default. A 22-ounce bone-in ribeye at Bavette's in Chicago, for example, will cost you $69.95; in Las Vegas, the price of the exact same steak curiously isn't listed on the website and costs significantly more at $91.

At The Grill, an upscale chophouse in Manhattan, the 14-ounce, dry-aged porterhouse is $74 -- in short, a lot more than your now relatively average $25-30 entree.

The substantial price differential, and the noteworthy price tag on the tomahawk may explain why many chophouses (Brooklyn's celebrated Peter Luger restaurant is among these) omit prices on their online menus -- though a spokesperson for MB tells CNN Travel that it's fairly common not to include prices as they tend to fluctuate.

MB Steak's menu includes a few items from the sea: fennel crusted salmon, sea scallops and shrimp risotto are available on any given night, but who goes to a steakhouse and orders fish?

If you haven't had enough luck at the blackjack table to justify the tomahawk (or if you just can't fathom paying that much for a food item, no matter how delicious or deep your pockets), MB also has a number of "signature steaks" from which to choose.

Order one of those and you may even have room for dessert.