The $1.3M bridge connects the Centre Station bus stop to the future passenger rail station. But officials say its benefits extend much farther. 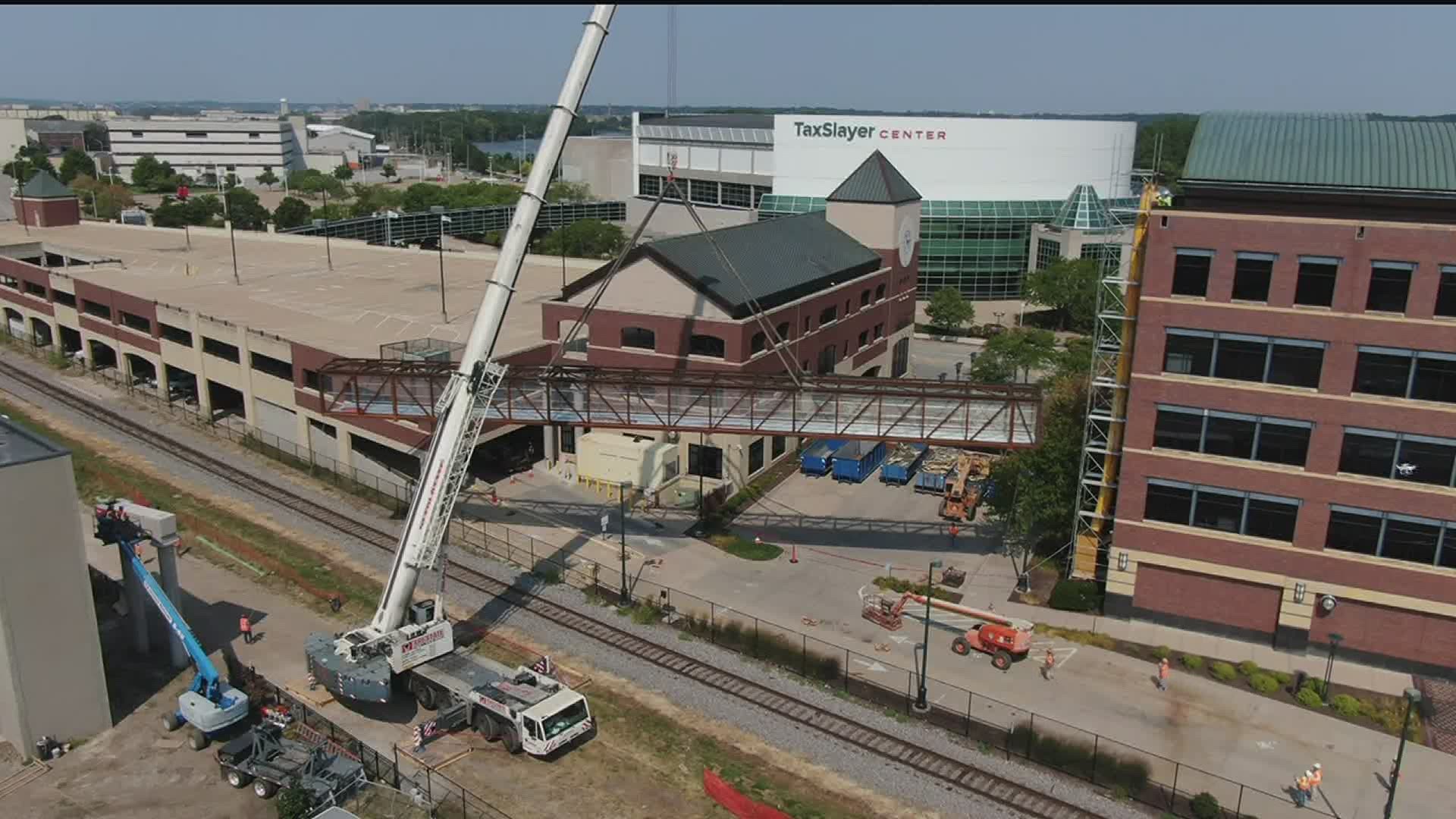 MOLINE, Ill. — Crews lifted up and connected the new passenger bridge in downtown Moline on Aug. 26.

With about two inches to spare between the bridge and the neighboring buildings, the structure was lifted up secured, officially linking the Centre Station bus stop and parking garage to the long-awaited "Q" passenger rail station.

Dubbed, "Sears Crossing," the walkway still needs roof construction and electrical work, but officials are hopeful it will open to the public this fall.

Approved in July 2020, the bridge was a joint effort between the City of Moline and MetroLINK and serves as the final piece of a 2018 development project that includes The Element Hotel and other retail partners.

The $1.3 million dollar project was paid for almost entirely through leftover grant funds. The IDOT Capital Assistance Program provided money for construction on the passenger rail platform and canopy, but extended delays allowed for funds to be transferred. The additional $493,681 needed was fronted by MetroLINK, and the city agreed to pay for ongoing operation and maintenance.

There has not been any further development of the passenger rail from Chicago to the Quad Cities, despite support within Illinois. In June of 2019, $225 million was appropriated for the line in the Illinois capital bill, on top of the $275 million awarded to the Chicago to Rockford line.

But both officials and business owners say that the pedestrian bridge is a step in the right direction, by showing commitment to bringing in passenger rail, as well as connecting more of the downtown area.

In a press statement, Moline Mayor Stephanie Acri said, "The goal of this project from the start was to not just build a platform for passenger rail, but to create a space that serves a variety of needs."

Once open, the walkway provides a safe and direct path between both the riverfront and TaxSlayer Center to downtown. Currently, pedestrians must cross the street and contend with both traffic and passing trains.

"This is going to allow pedestrians to safely walk between the Fifth Avenue main street retail partners and also access the TaxSlayer, the Radisson and John Deere Pavilion," said Jennifer Hirsch, Manager of Administration for MetroLINK.

Area businesses say they like it too. With no date for the passenger rail service in sight, constructing a pedestrian walkway shows commitment to downtown development, said Nick Holke. As the General Manager at The Element Hotel, the walkway opens directly into his backyard.

RELATED: “We probably could have sold the hotel over twice yesterday - easily"; QC hotel business surges after Monday's Derecho leaves thousands without

"It's moving the ball forward again," he said. "It looks like when things are stalling or aren't happening as quickly as you'd like them to, it's nice to see the city of Moline continue - even in a pandemic - to move forward. It's encouraging not only to us but to all of the businesses around here."

The crossing was named after a prominent Moline settler, David B. Sears. He is credited with building the first dam on the Mississippi River as well as a bridge connecting Moline to Arsenal Island.