The building housing Moore Monument and Granite Company, as well as Wilbert Burial Vaults in Milan, caught fire shortly before 7 on Saturday night. 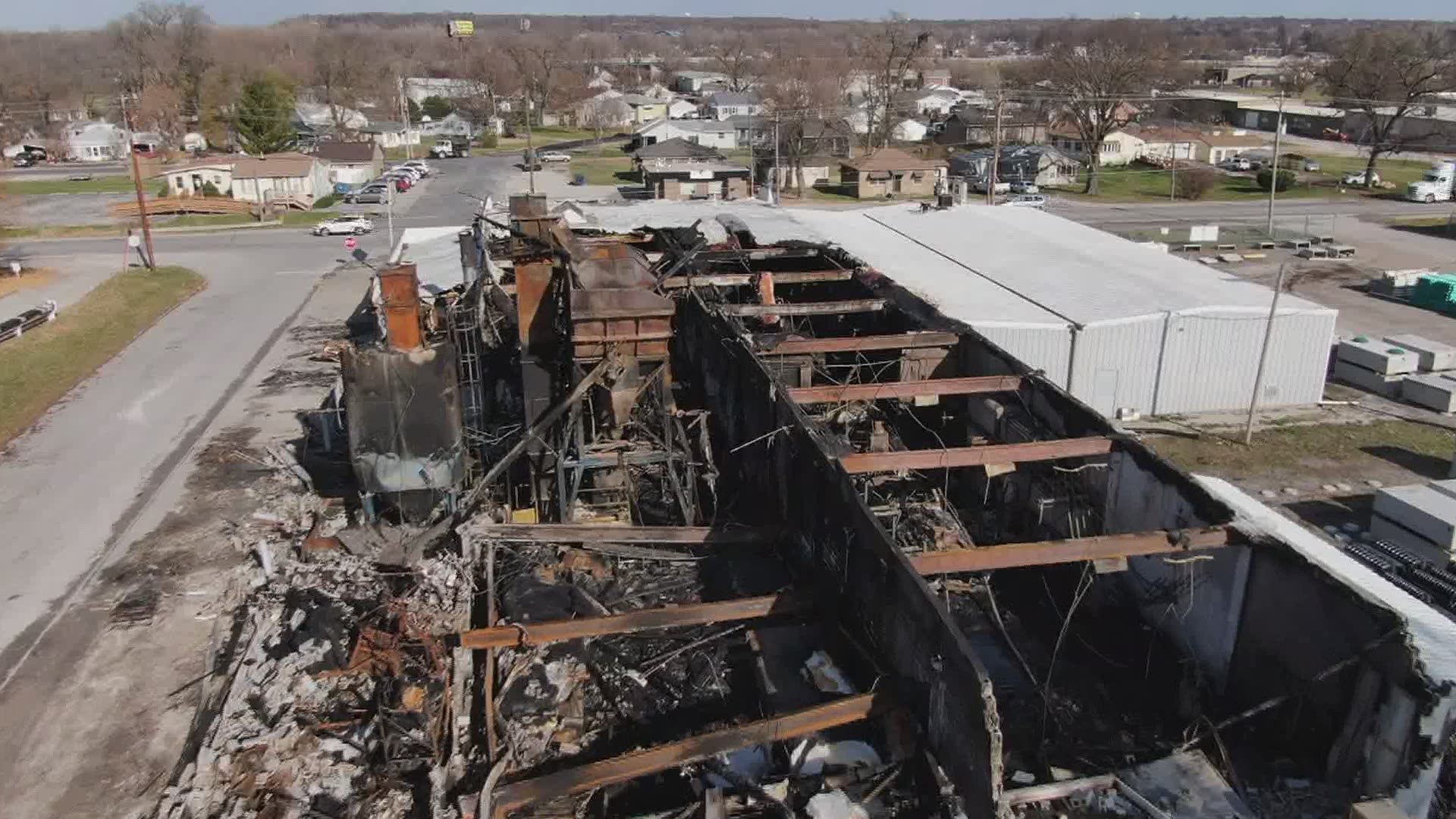 MILAN, Ill. — Around 7pm on Nov. 9, a structure fire was reported in the building housing Moore Monument and Granite Company, as well as Wilbert Burial Vaults, in Milan.

Milan police say no one was hurt.

Kimberly Salinas lives next to the building, and says her husband was sitting outside on Saturday evening when they could smell smoke and decided to investigate. They eventually saw smoke coming out of the top of the business, and upon looking in the window, saw flames and ran back to call 911 at 6:52pm.

"From my angle, I could see white smoke pillaring out the top," said Salinas. "Then, by the time they got here, I was already outside with half the neighborhood and seeing the smoke and flames just roaring out the top of the building."

Several explosions rocked the building, and outer walls collapsed in the blaze, which firefighters battled until early Sunday morning. Salinas said she heard three explosions, with the first being the largest.

"You could just hear the crackling noise of the fire going, and then the booms from the explosions were loud," she said. "Then people started running, because a lot of them were standing way too close to the fire."

Since crews wrapped up in the early hours of Sunday morning, neighbors say they've seen them return several times to put out reoccurring flames. The first, just a few hours after leaving on Sunday, and more following throughout the afternoon and into Monday.

Blackhawk Fire Prevention Department tells News 8 they've used over a million gallons of water on the blaze, including 4,500 gallons around 3:30am Monday morning alone. They say windy conditions keep causing the flames to reignite.

Scared neighbors could be seen rushing back to their homes, surrounding the inferno, on Saturday evening.

"I know a lot of people weren't home at the time, and they were getting messages saying their power was out, then they returned and there was so much smoke and flames," said Salinas. "It was scary, I didn't know if I should run."

Most of the sustained damage was felt by Wilbert Burial Vaults, while the building's accompanying business, Moore Monument and Granite Company, says they had equipment damage.

"You just feel so sorry for somebody that loses something in a tragic way. Especially this year, and it being rough for everyone financially. It's sad to think about," said Salinas. "I mean, I've seen fires in the past, but not that kind of damage. It just keeps going."

A boil order is currently in place for Milan residents north of 11th Avenue. The city says they'll conduct another test on the water safety and pressure sometime in the afternoon on Tuesday, Nov. 10.