Despite a global pandemic and offseason restructure, the River Bandits remain one of minor league baseball's best organizations. 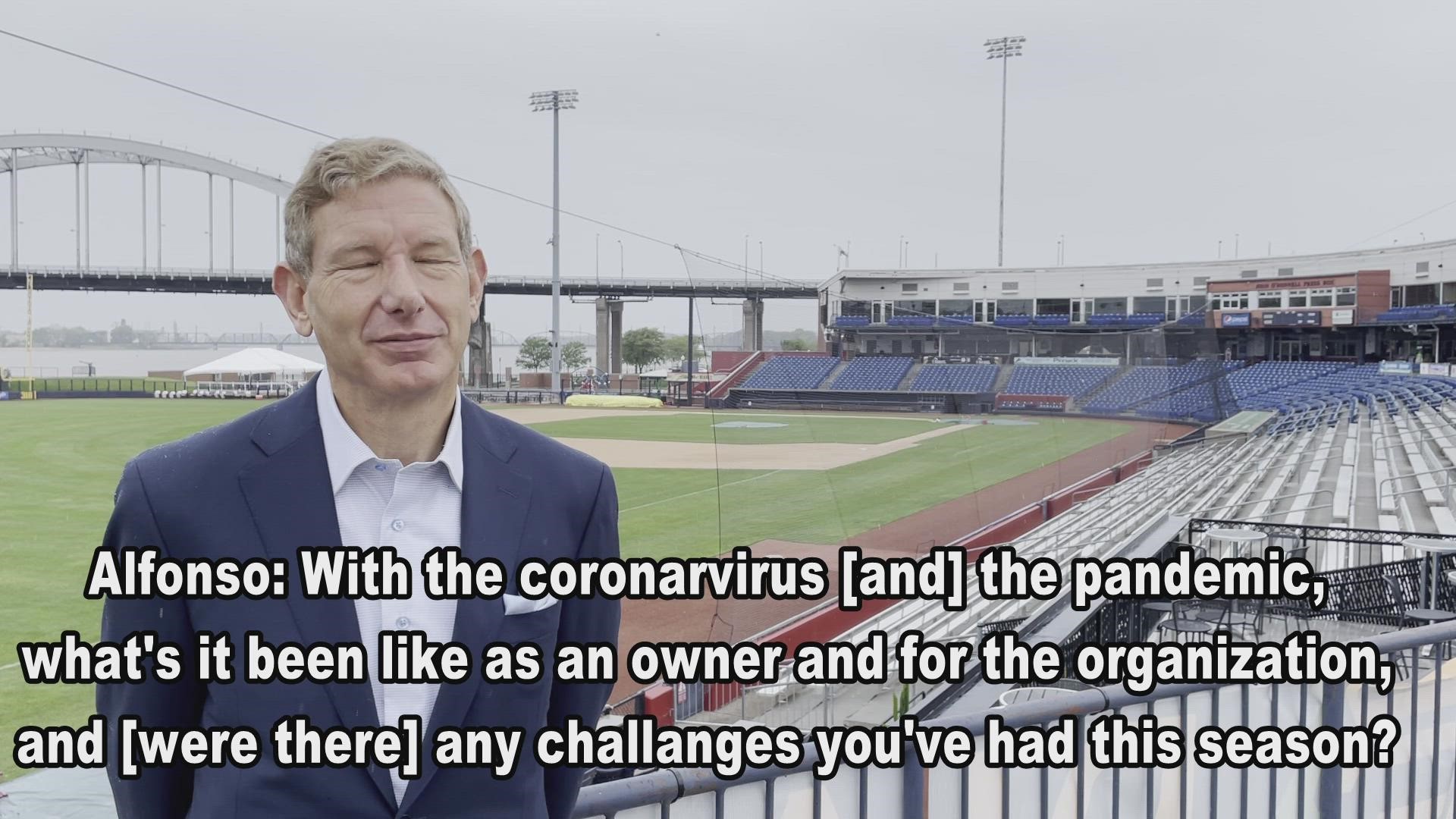 The obstacles brought on by the COVID-19 pandemic come with new challenges for many, including those in charge of small and large businesses.

The same can go for owners of professional baseball teams as well.

Among those tasked with navigating the ‘new normal’ we’ve been living in for the past year and a half or so is Quad Cities River Bandits owner, Dave Heller.

As Dave and I walked up the concourse to set-up for the interview, which he was kind enough to do as rain picked-up on us, we arrived at the end of the left field bleachers where the seats end and an amusement park begins.

Carnival rides and a 110-foot Ferris wheel stood before us, and in our peripherals: a professional baseball field on the shores of the Mississippi River with highway bridges in the distance.

"This was my vision," Heller said.

There's a special history to 90-year-old Modern Woodmen Park. It's similar Wrigley Field and Fenway Park, which any baseball fan would appreciate.

To see no games for an entire year at the Quad Cities' unofficial landmark was strange for those in the area, and it was a challenge for fans and everyone involved with the team.

Nonetheless, Heller says it's something the organization has pushed through.

“To go 20 months without playing a baseball game, without any revenue, it’s been hard, but we persevered and we did it without having to lay off a lot of people. It’s something we’re really quite proud of,” Heller said. “Now we’re on the other side and we’re enjoying great crowds. I really have a special appreciation for that more than I have before.”

Despite different strains of the coronavirus, new team protocols, and playing in a brand new minor-league system, the River Bandits are putting together the best season of any team in the High-A Central League this season.

RELATED: Preview, how to watch: Iowa vs. Iowa State game on Saturday

A record of 71 wins and 37 losses has the River Bandits in prime position to make a run at the 12th title in team history and the first since 2017.

Like every minor league baseball team, the River Bandits had their entire 2020 season cancelled due to the global pandemic.

As if waiting for baseball's return for the 2021 season weren’t enough, some clubs were dealt a huge blow when MLB dropped a bombshell with a brand new restructuring announcement in December 2020.

The Burlington Bees and Clinton LumberKings were informed they would no longer continue as MLB affiliates with the Los Angeles Angels and Miami Marlins, respectively, due to the status of their facilities, and distance from the major league clubs.

A total of 40 minor-league teams lost their affiliations with MLB teams.

Fortunately for the River Bandits, Modern Woodman Park was in good enough shape to receive an invitation to join the Kansas City Royals as their High-A affiliate.

The switch comes after the River Bandits spent the previous eight seasons with the Houston Astros in Single-A.

“It’s like you just broke up with your girlfriend, and then you just started dating Miss America. That’s what it’s like being with the Royals,” Heller said. “They really care about the minor leagues, they develop their players and they know what we know; The players that our fans see today are going to be the stars of Kansas City tomorrow.”

The new structure also comes with 10-year agreements to stay affiliated with the Royals and remain at Modern Woodmen Park in Davenport. Part of the deal includes millions of dollars in planned renovations in order for the team to uphold certain standards and avoid losing their MLB ties like Burlington and Clinton.

On August 25, Davenport City Council approved a $2 million budget to build a floodwall on the northeast side of Modern Woodmen Park, a new workout and fitness room, and renovations to the home and visiting clubhouses.

This is just one part of $5 million in planned renovations for the 90-year-old ballpark which has become an icon to Davenport and the Quad Cities area.

“When we have first-rate amenities that MLB has insisted on, that gives us something of an advantage for our players,” Heller said. “That’s how we develop a winning culture, and that’s what we’ve been doing.”

Heller explained he isn’t quite sure what the future renovations could look like after this season, but added the team has their finances prepared for whatever is needed.

Those dollars could go towards fixing up the stadium while also providing up-to-date facilities for the team.

The following posts are reportedly from players in the organizations affiliated with the Chicago Cubs, St. Louis Cardinals, and Oakland A's.

A Chicago Cubs Minor Leaguer spent a night this season sleeping in his car because he did not have enough money to pay for a hotel. He sent us the video. pic.twitter.com/l3L5V3I3uo

The Double-A teams for the St. Louis Cardinals and San Diego Padres begin a series tomorrow in San Antonio. This is where the Cardinals players were forced to sleep last night. pic.twitter.com/A0YjP6g6DB

Players in the Oakland A’s organization shared these photos of their recent post-game meals.

No employer would serve these meals to employees they care about. Why are the A’s serving them to their future Major Leaguers? pic.twitter.com/cIFqiPg6iX

The less-than-ideal team provided perks that come with an average in-season pay of $600 per week among Single-A, Double-A, and Triple-A players can be a burden for any individual chasing a dream.

Knowing the River Bandits players are taken care of is something Heller says himself and the Royals organization takes pride in, and he credits all the success of the organization to those same individuals on the field.

“The players are everything, you can’t play baseball without them,” Heller said. “Making sure they’re [the players] happy, healthy, and comfortable is very important to us. It’s why we don’t skimp on anything we give them.”

The success on the field might be able to back that up.

In Heller's tenure, the River Bandits have won three championships in seven seasons and has also boasted accolades off the field.

In 2013, Modern Woodmen Park was voted "best minor-league park" by readers of USA Today and earned a five-star rating from Ballpark Digest in 2015.

Modern Woodmen is something of a historical landmark to the Quad Cities. Like Wrigley and Fenway, it holds a true nostalgia, but needs proper renovations to continue hosting games in the modern era and beyond.

When asked about the future of baseball in the Quad Cities, Heller believes it will be similar to what takes place today.

It's been 20 years since the last renovations, but Heller says the maintenance will provide for a better version of what can be an already memorable experience.

“I think it looks a lot like what it does today,” Heller said. “[It's] the most beautiful ballpark in America, underneath one of the most beautiful bridges in America on the shores of the Mississippi, with a fantastic and gorgeous Ferris wheel and double-decker carousal. The main things aren't going to change."