A Portland filmmaker and journalist was shot in the eye with an impact munition early Sunday morning while covering the demonstrations in downtown Portland. 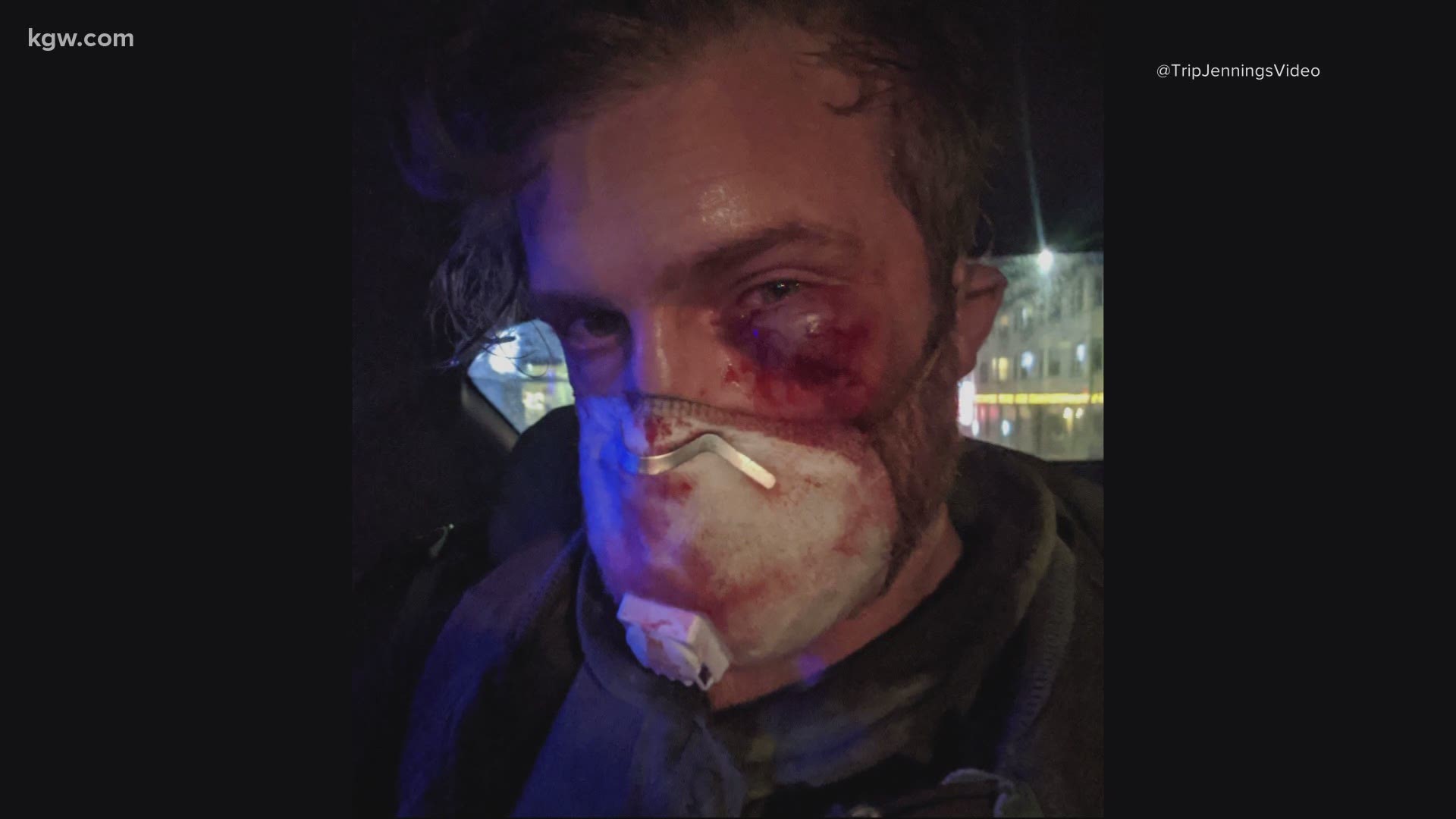 PORTLAND, Ore. — Filmmaker and journalist Trip Jennings has covered uprisings across the world from Mexico to Palestine over the past decade. He’s worked for National Geographic, PBS, and currently runs his own video production company.

Now, he’s documenting the nightly clashes between protesters and federal agents in his hometown of Portland.

“Portland feels like it's really the epicenter of something that's much bigger than just the city. There's this, you know, sort of low-level warfare being waged every night between the federal government and protesters fighting for Black lives. And it feels important,” said Jennings.

Jennings was covering the protests this past weekend when he was shot in the eye with an impact munition by a federal agent.

“I was shot in the face by our government. A journalist doing the job that I've done for over a decade, covering a protest, following a dispersal order. I was shot by federal agents,” said Jennings.

Jennings was taking pictures and video of the protests around 1 a.m. Sunday morning when heard a muffled dispersal order from police or federal agents near the federal courthouse. He said the crowd took off running as federal agents fired rubber-coated bullets and other impact munitions into the crowd.

Jennings said he went back to help a person who’d fallen and got mixed back into the crowd. He saw the tear gas cloud part and a line of federal agents walking towards them, firing more impact munitions. Jennings ducked behind a car.

“I hunkered down behind the car as the car was being shot. And just next to me on the street was maybe 20 or 30 protesters who put shields up and a bunch of people ducked behind those shields to take some cover,” said Jennings.

As soon as the shooting stopped, Jennings waited a few moments and stood up with his hands near his head for protection and to show that he had his camera in his hand.

“I walk, ran another 50 feet or so, and started to turn around, to see if I was far enough. You know, clearly in my experience, if you're not posing a threat, you're moving away, you get sort of far enough away from the police scene, you're safe,” said Jennings.

He began to look around to assess the situations and was hit with an impact munition in his right eye, shattering the lens of his gas mask and lacerating his face and eye. Jennings said he was then hit with pepper balls because his skin started to burn.

“It's the question that is, is this permanent is the rest of my life, different for a moment? And then the next thought is just like, 'OK, I need to get out of here. This is not a safe place to be and I need help,'” said Jennings.

He yelled for help, but his calls were muffled by his gas mask. He then flagged down three volunteer medics who ran over to help.

“Well, I took my gas mask off and one of them said, 'Oh, my God. That's bad.' Which was not what I wanted to hear,” said Jennings.

Credit: @TripJenningsVideo https://www.instagram.com/tripjenningsvideo/
Trip Jennings after being shot in the face with an impact munition b y federal agents.

The medics drove him to Good Samaritan Hospital where he said the tear gas and pepper spray coming from his body overwhelmed the doctors and nurses who tried to help him. A doctor had to put on her respirator she’d been issued for COVID-19 and put eight stitches in his eye.

Jennings doesn’t know if he has permanent damage and is waiting to see a specialist.

On Tuesday, the ACLU called this incident a violation of that order and asked the court to sanction and hold federal agents in contempt.

The Department of Homeland Security has not returned KGW’s request for comment.

“I am the professional that our laws are made to protect. And that, unfortunately, isn't happening,” said Jennings.

While the Department of Homeland Security didn't comment for this story, they have reported that dozens of officers have been injured at the Portland Protests.

"A federal agent's hand was impaled by planted nails.  Another federal agent was shot with a pellet gun, leaving a wound deep to the bone.  And tragically, three federal officers were likely left permanently blinded by the rioters using lasers pointed directly at their eyes," said McEnany at a press briefing on July 24, 2020.

"We've had a number of officers who had days-long blindness. So far, they've all kind of come back, if you will," said Cuccinelli.

Cucinelli also said more than 250 injuries have happened to the more than 140 federal agents stationed in Portland.

Jennings called the incident a learning moment for himself and others.

“I think when we align ourselves with Black lives in this way ... even as impartial journalists, trying to simply document what's going on, that white privilege is not enough," he said. "And it's a small glimpse into what people of color feel every day. The risk that interaction with law enforcement might end up with them going to the hospital might end up of them dying.”

He wants others to support the people of color protesters and journalists on the front lines of the protest every night.

“There are a lot of amazing journalists, especially people of color, out there documenting what's going on every day, every night," Jennings said. "I'm very grateful that there are people out there sharing these stories, making sure that everything like this gets caught on video. We need as many cameras as possible to really capture so that folks like yourself can show it to the world as well.”