Project Outrun is asking for your shoes... to give custom kicks to kids with cancer

The Iowa chapter of Project Outrun will be collecting new and used shoes through the end of January. 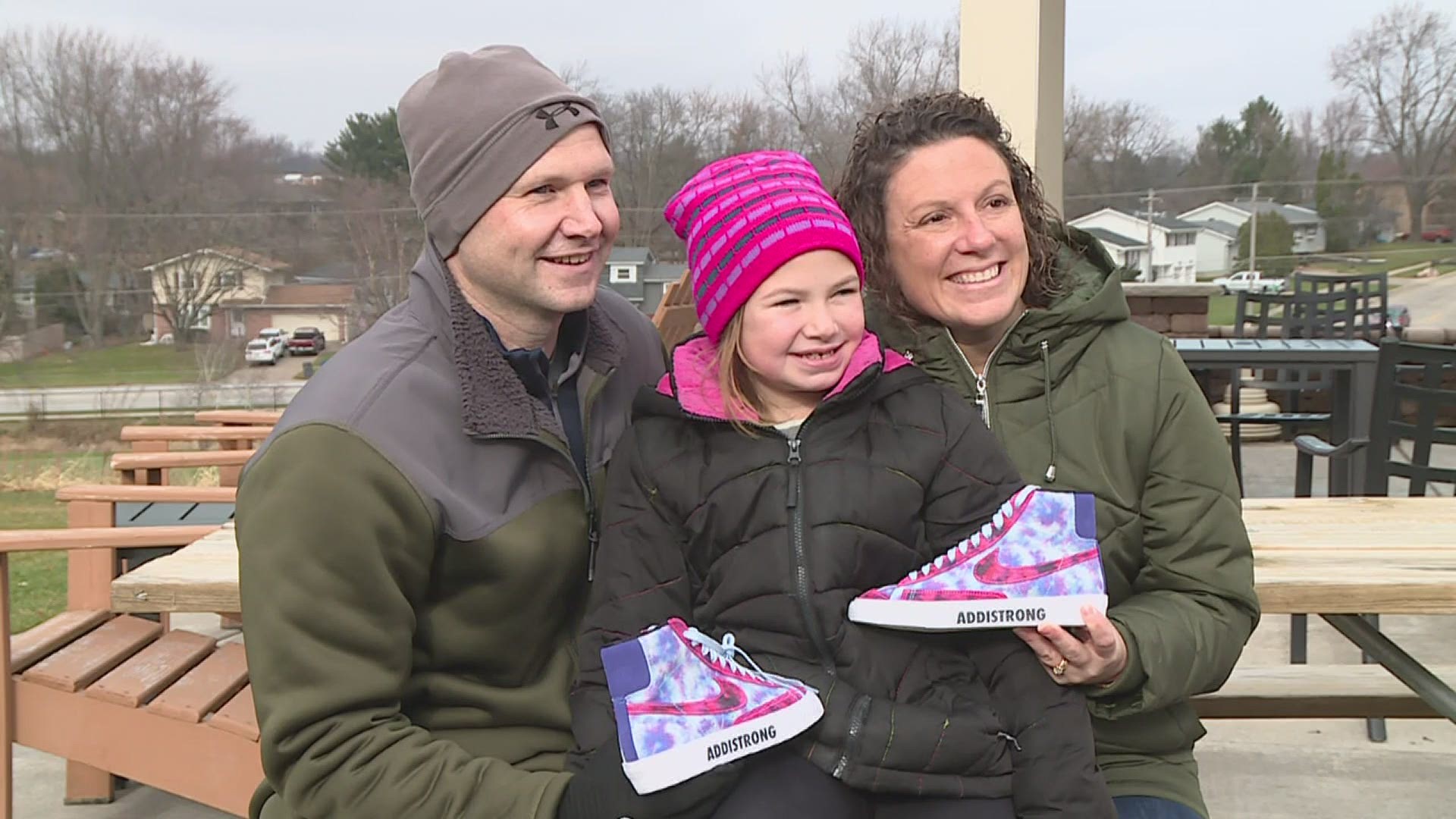 BETTENDORF, Iowa — When it comes to a new pair of shoes, it might be hard to think of a pair more powerful (or more stylish) than 8-year-old Addi Kelly's custom kicks. With tie-dye swirls of purple, light blue and hot pink, complimented by dark blue backs, teal laces, and big block lettering reading "ADDISTRONG" across the bottom, they're one of a kind.

Addi was able to design the shoes, at no cost to her, thanks to help from her friends at Project Outrun Iowa, who sponsor custom-designed shoes, made by and for local kids with cancer.

And for Addi, her shoes make her feel "strong."

"I love my shoes so much," said the third grader from Geneseo. "I just love this time and I wanna remember this as this is what I went through."

What she went through was 60 weeks of chemo treatment, after being diagnosed with a brain tumor in April of 2019. Through it all, her mother, Mandy Kelly, says she kept a smile on her face and tried to remember only the good parts from the experience.

And one of those good parts was her new shoes from Project Outrun Iowa - the first official chapter for the national nonprofit. The group works to raise money, so they can sponsor a kids new shoes, that they get to design all on their own.

It costs about $100 to sponsor a child, but as Anthony Long, with Project Outrun Iowa, says, "when kids outrun cancer, it helps to have the right shoes."

Project Outrun was first founded in 2016 in Akron, Ohio, when Andy Sheppard was running a 5K to benefit Kylie Rose - a young girl battling pediatric cancer. He decided that if Kylie was going to outrace her illness, she needed proper shoes to get the job done, and the custom footwear idea was born. Since then, Project Outreach has helped create over 950 pairs for children across the United States.

Since the Quad Cities chapter's establishment just eight months ago, they've already created 35 custom shoes for area kids. But now, they want to help even more, and anyone in the area can pitch in, without spending any money.

RELATED: Toys for Tots 2020: How to receive and donate gifts

From now until January 23, they'll be collecting shoes - new or gently used, and of any size or model - in donation boxes around the area. From there, the organization will take sell them all, by weight, to another nonprofit, funds2orgs, and sent to developing countries. The money will then be used to sponsor a local child in the creation of their own, custom-made shoe.

According to Long, their goal is to raise at least $1,000 which would mean collecting about 2,500 pairs of shoes. But he's confident that the Quad Cities will step up to the challenge.

"The community has the opportunity to do something pretty special together and it's not gonna cost them a dime. Just 'pairing it forward' for these kids with cancer," he said.

For kids like Addi, the shoes mean so much more than just something she can wear on her feet. The hashtag of the organization reads "I'm not sick but my shoes are," and the group's entire goal is to help the kids reach their cancer-journey goals, whether they're big or small, and find health and happiness.

Each kid not only gets to virtually design their own shoes, but they also recieve a swag-bag of goodies from Project Outrun that includes a t-shirt, a medal and a finish line where the children can write down their goals.

"Then when they get their shoes in, they bust through that finish line with their parents in their brand new shoes and feel fast and feel like they've accomplished something," said Long. "It's all for the kids and helps them feel fast and empowered and strong."

Credit: Mandy and Ryan Kelly
Addi and her parents, posing with her medal and her (newly completed) finish line

From choosing the patterns to the colors to the laces to the shoe style, everything that goes into the new kicks is 100% designed by the kids themselves. As Long puts it, it allows them to "customize their own path toward that healing journey."

According to him and his wife Lauren, there's nothing more enriching than to see the joy on the childrens' faces when they see their shoes for the first time.

"The cool thing about shoes is [they're] worn every day. It's something they can carry with them every day and they can look down and every step is leading them toward a path of strength," he remarked.

That's why they're extremely hopeful this benefit will allow them to help out even more children in the Quad Cities area.

"We know there are tons of kiddos, unfortunately, that need and could benefit from this kind of unique spark of joy," said Long. The best part, he remarked, is that it doesn't even cost the donor a dime - all it takes is a little bit of closet cleaning.

To Ryan Kelly, Addi's father, the inspriation and encouragement his daughter got from the entire process was more than worth it. He even said when she opened her bag to find all of her new goodies at the end of a long journey, it was just pure joy.

RELATED: 'There's always more': a Moline church gives thousands of pounds of food away to families this Thanksgiving

"I think we learned through all this, that there are so many people going through so many things in life. And to be able to give back in any way and to join in with them is a great opportunity for us," said Kelly. "We're hoping this does a lot to kids in the future here that are going through a journey similar to this."

Because, as his wife Mandy stated, the shoes are more than just something their daughter can wear.

"Anything to bring joy and happiness - something to not focus on maybe the not so good things going on - can help a lot. To help motivate her and to celebrate. [And] anytime we can celebrate little things, it's good," she said.

While her shoes may look incredibly intricate, Addi just giggled when we asked how many days it must have taken her to design.

"It took about an hour!"

They represent all of the best parts of her, according to her parents. From her love of tie-dye and unicorns and fun colors, to her belief in all things possible and endless energy. And the best part... as told by Addi... is that her sister is jealous of them.

Credit: Shelby Kluver
Addi's shoes represent all the best and brightest parts of her personality

While they are a size five - four times larger than her current shoe size - Addi says she's excited to grow into them and finally start to show them off.

"They're your own," she explained. "It's not just some shoes. [They] are your own designed shoes."

Addi is now in remission, and is as smiley and energetic as ever. And if you ask her about the time in her life when she was actively receiving treatments, she'll tell you she misses her nurses and doctors "very much" but is happy to finally have her Monday's back (the days she would normally receive her weekly chemo treatments). And more than anything, Addi can't wait for the weather to warm up so she can put on her new shoes and play with her friends outside.

If you'd like to donate shoes in the drive, drop-boxes will be available, during normal business hours, at the following locations: