Dallas tornado classified an EF-3, had winds up to 140 mph

The National Weather Service has confirmed three tornadoes in North Texas, including an EF-3 in North Dallas. 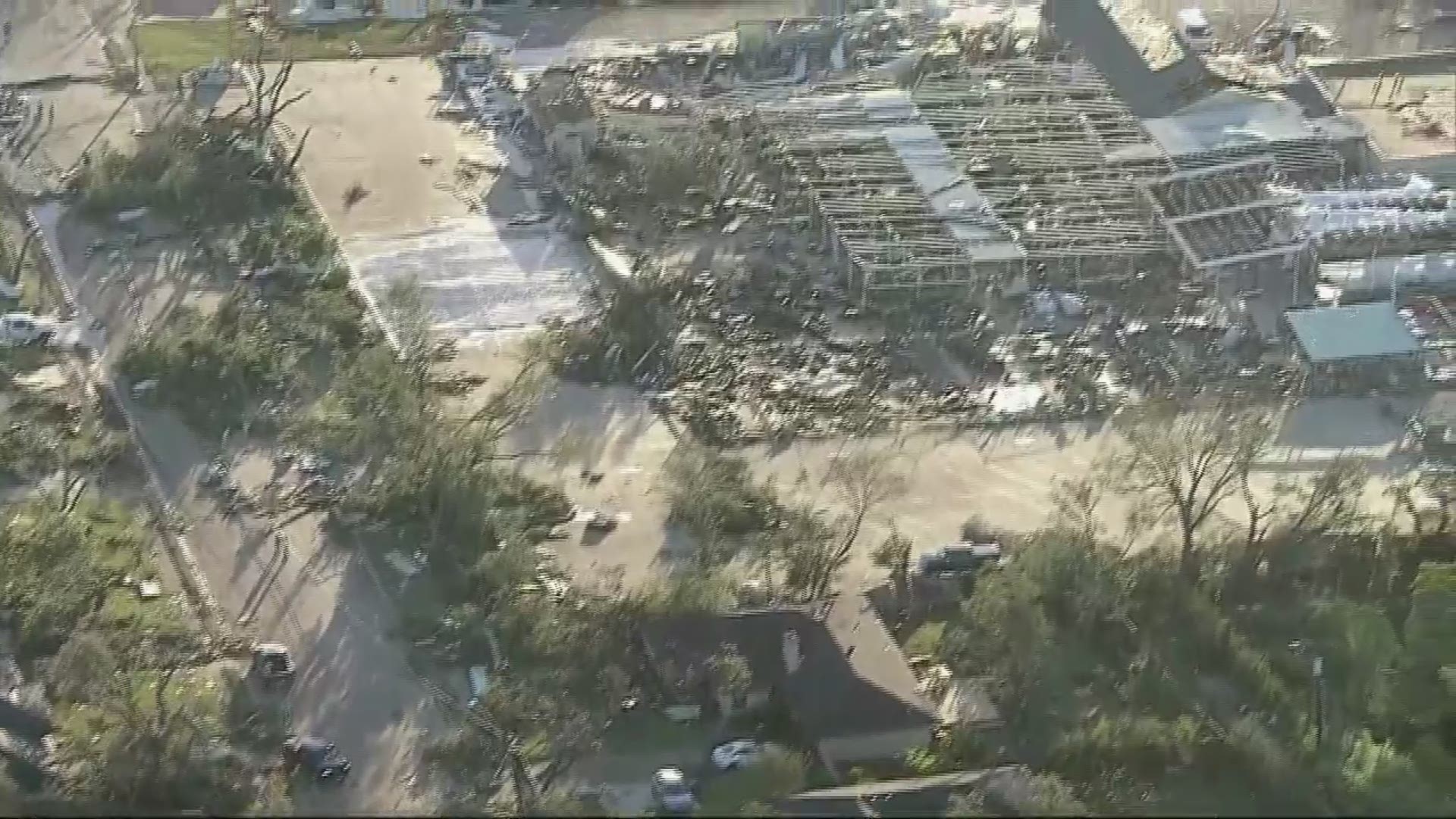 This is a breaking news story and will be updated throughout the day.

An EF-3 tornado touched down in the Preston Hollow area of the city, decimating homes and businesses. It was one of three tornadoes confirmed across North Texas.

No deaths have been reported, and three people are in the hospital with non-life-threatening injuries, city officials said.

"Considering the path that the storm took — you know it went across a pretty densely populated part of our city — I think we should consider ourselves very fortunate that we did not lose any lives," Johnson said during a Monday morning news conference at Dallas City Hall.

The National Weather Service confirmed the Dallas tornado Monday afternoon. The service will release details of the path of the tornado later in the day.

The service had already confirmed two tornadoes outside the city. An EF-1 was recorded in Rowlett, bringing estimated wind speeds of up to 100 mph.

An EF-0 touched down north of Wills Point in Van Zandt County. That tornado brought winds up to 80 mph to the area.

In Dallas, firefighters spent six hours searching buildings for trapped people after the storm, which started around 9 p.m.

As of midday Monday, no one had been reported missing.

It wasn't immediately clear how much damage the high-speed winds, hail and rain caused Dallas neighborhoods.

Crews have been working to repair damaged power lines and natural gas lines across the city.

Oncor officials have said it could take days to restore power to some areas that were hit the hardest.

Dallas County Judge Clay Jenkins issued a disaster declaration, and city officials said it'll take time to determine how much, if any, help will be needed from the state and the federal government.

Officials urged residents to file claims with their insurance companies. And the mayor said people concerned about the safety of their homes should stay out of the buildings.

“Our top priority is making sure everyone in our city is safe," Johnson said.

He reminded residents that most of the city's libraries and recreation centers are open for people who need a place to spend the day and charge their cellphones.

Some of the homes hardest hit by Sunday night’s tornado are in the most exclusive neighborhoods in Dallas.

Strait Lane is known for the multi-million dollar mansions and estates that line both sides of the road. Several homes were heavily damaged there.

One block west of Strait Lane is Dorset Place. Three of the four homes on the street looked like they might have to be torn down and rebuilt.

Around 4 a.m. Monday, search and rescue teams from various fire departments brought in dogs to search for any victims on Dorset Place. They found none.

As the sun came up, Mason Smith, who had been visiting his daughter’s home on Dorset Place, came out to see the damage in the daylight.

"Three grandchildren, a total of seven of us and two dogs, were in the little bathroom and you could hear the noise,” he said. “We started hearing things being jostled on the inside of the house and you could hear things banging and breaking and hitting. And then my wife just started praying — we didn’t know if the house was going to still be standing or not.”

When the weather calmed down, Smith and his son-in-law walked outside and were stricken by what they saw. The second floor was ripped off the house across the street. The woman who lives in the home walked out her back gate on her own, much to their relief, Smith said.

After the sun came up, one other oddity was revealed: despite most everything in the neighbor’s home being destroyed, the woman’s dishes were still intact, stacked inside glass-door cabinets hanging on the kitchen wall.

Preston Hollow resident Ken Luce heard alarms and saw the sky turning green Sunday night. He, his wife, his son, a friend of his son's and his dogs crammed in a closet under the stairs while the storm ripped off the house's roof.

Several businesses near the intersection of Preston Road and Royal Lane were closed Monday.

The Central Market in the shopping center was significantly damaged and will remain closed during clean up and repairs.

“We are grateful to report no serious injuries were sustained inside or outside of the store during the tornado,” said director of public affairs Mabrie Jackson in a written statement. “We will work quickly to get this neighborhood store up and running as quickly as possible to serve our customers as they recover from the storm.”

"We and our neighbors in the shopping center took a serious hit from Sunday's tornado," the bookstore posted on social media.

The storm moved east from the Preston-Royal intersection, ripping the roof off a Home Depot near U.S. 75.

A Home Depot spokesperson said an assistant manager closed the store early and made everyone go home because he was concerned about the forecast.

The front of the store has significant damage and broken pipes caused flooding, said Christina Cornell.

More than 100 people work at the store. The company is working to relocate those employees to other Home Depot locations.

RELATED: DFW weather: A number of schools closures have been announced for Monday 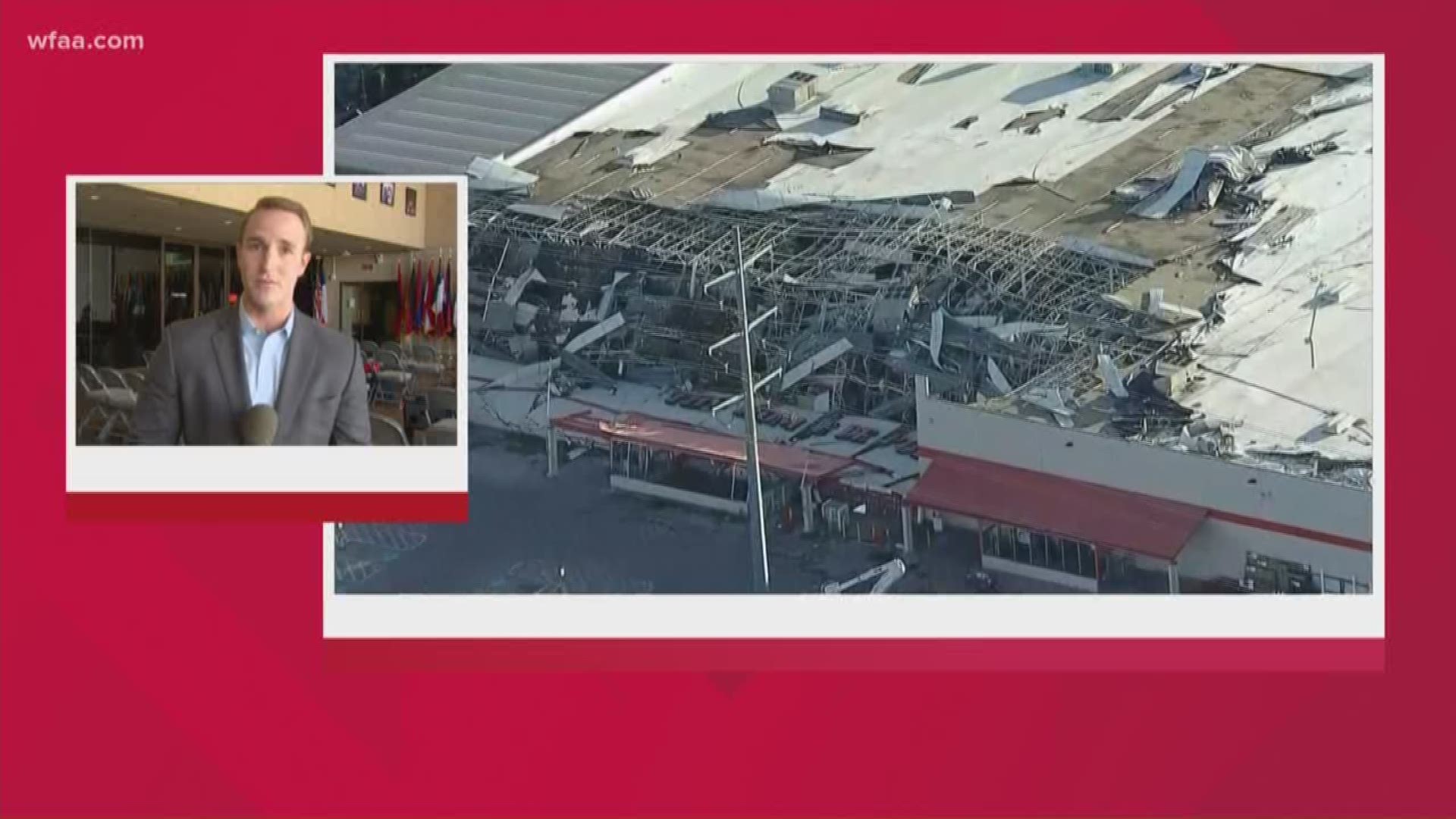 Reporters Matt Howerton and Teresa Woodard contributed to this story.