Fourth ward alderman Matt Timion was hit by a car while biking on 23rd St. and 6th Ave. in Moline, Monday June 21. Now he's asking the city to make some big changes. 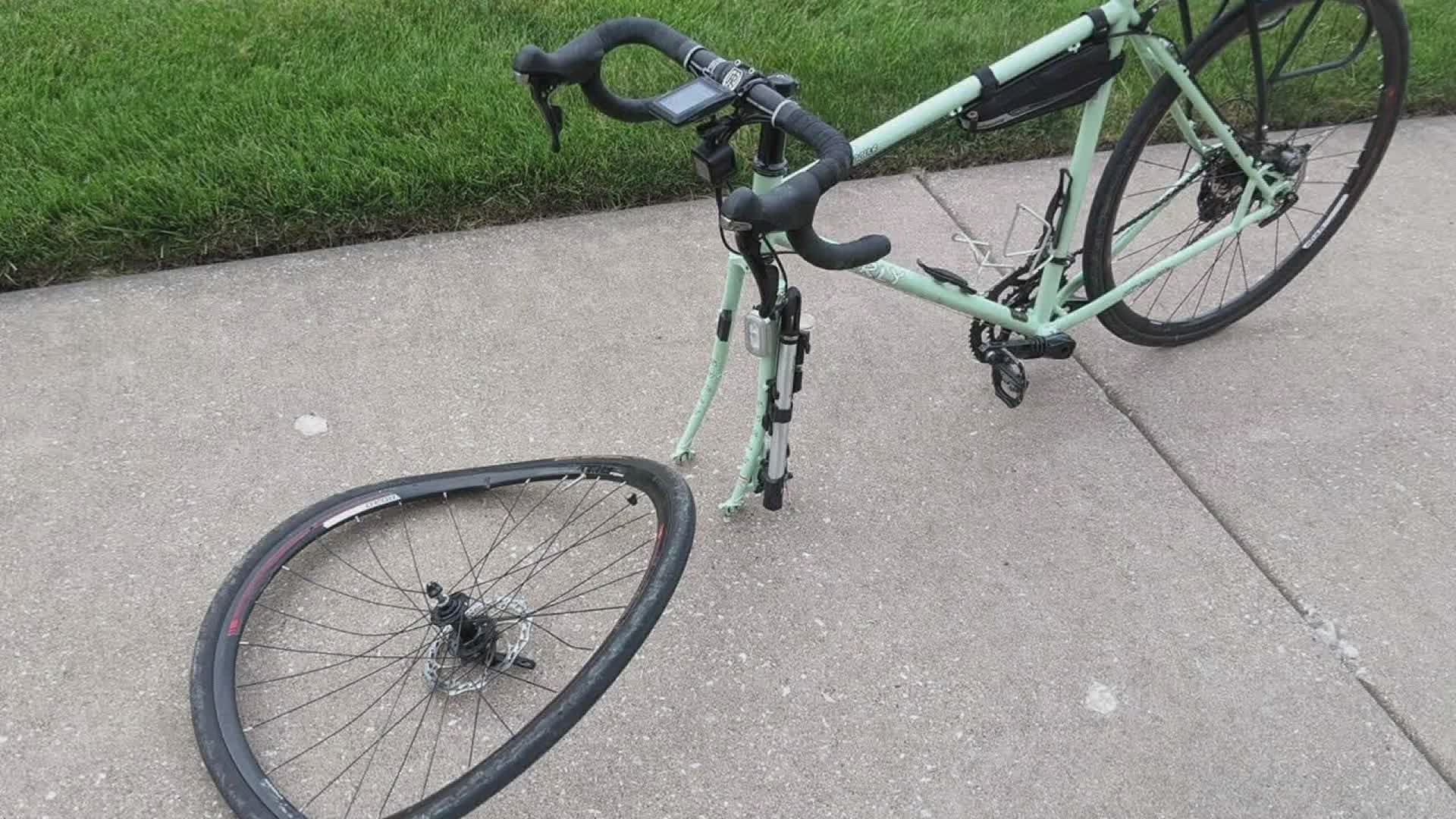 MOLINE, Ill. — On Monday, June 21, Moline's fourth ward alderman was biking home when he was struck by a car. Matt Timion had been waiting on the intersection of 23rd St. and 6th Ave. in Moline when a car making a last-minute left turn clipped his front tire.

"They turned right into my lane and just struck me on the bicycle," said Timion. He said it was a young driver, just trying to make it through the yellow light before it turned red. "They hit my front tire, my front fork. They hit me just right so it wasn't like a straight on impact. I flew off my bike, my tire got destroyed, my body I think bounced off of their car. But in the grand scheme of things, it was probably the best case scenario."

Timion has been hit while riding his bike in Moline before, and said that accident was much worse. Now, he's just grateful to be alive, especially after the Quad Cities saw four fatal bicycle accidents over the last two months.

On May 4, 60-year-old Hugh Martin was hit by an SUV in rural Rock Island County. Later that day, 13-year-old Charles Hubbard was struck by a Moline police cruiser, driven by Officer Katherine Pennacchio, who is now on administrative leave.

A month later, on June 3, 40-year-old Alex Marietta of Geneseo was killed by an SUV that ran a red light in Davenport.

And on Jun 17, 78-year-old Debbie Schroder was hit and killed in Moline.

For comparison, Chicago averages about 6 fatal bicycle accidents each year.

"It's becoming a problem where a lot of people are starting to recognize that there just isn't the infrastructure in the Quad Cities for cyclists or for people that don't own vehicles," said Timion.

According to the Bi-State Regional Commission's 2020 Quad Cities Traffic Safety Plan, that intersection on 6th Ave. and 23rd St. in Moline is the most dangerous in the Quad Cities, with an average 22.6 annual crashes.

He brought up his concerns at the city council meeting the following evening, saying many of his fellow aldermen were happy to hear he walked away without injury. But Timion says the next person might not be so fortunate.

"Structurally, we just don't have these safeguards in place. And a lot of people have commented that they feel it's sad that it takes a city council member getting hit by a car to bring more attention to it. But at the end of the day, if it helps the city progress, I guess it's worth it," he said. "It's one thing to say that it should be safer to cycle here and I think that's a given. But the question is how, and the answer is a lot of infrastructure."

Timion is now advocating for better cyclist infrastructure throughout Moline, saying there's not enough bike lanes, and the ones that do exist are disconnected and difficult to navigate between. Even the existing paths, such as Ben Butterworth Parkway, are dangerous to bike to, said the alderman.

"We have an older city but people in general are biking and walking more. So the question is, how do we make the city more accommodating to that," questioned Timion. "If you look at Ben Butterworth down here, it's a great path, but there are no easy ways to get to it. So it's really prohibitive to people that don't have a vehicle with a bike rack or a van."

He says having bicycles share the road with cars might not be an option at this point, since so many local bikers don't trust vehicles anymore.

Now, Timion is hopeful conversations with city leaders now will create a budgeted plan, ready to go for construction season next spring. He's hopeful that some of Moline's $20.2 million from the American Rescue Plan funding can go toward making the city a safer place to bike and walk, but he also says the work can't stop there.

"That money is going to run out eventually," he said. "So Moline has the opportunity to change our direction and say these are our priorities, these matter to us, and we can really make make a difference in that regard."

Without that work, Timion worries that less and less cyclists will feel comfortable on the road. Something he says contributes to a hidden tax of living in the area.

"You can't live in Moline without a car," he explained. "So the house price might be low. But you need a car to go to the store to go to the park or even just to come down here. I would like it if that tax could be whittled away so that we don't necessarily have to have so that we have options for people that don't have a vehicle can afford one or don't want one."