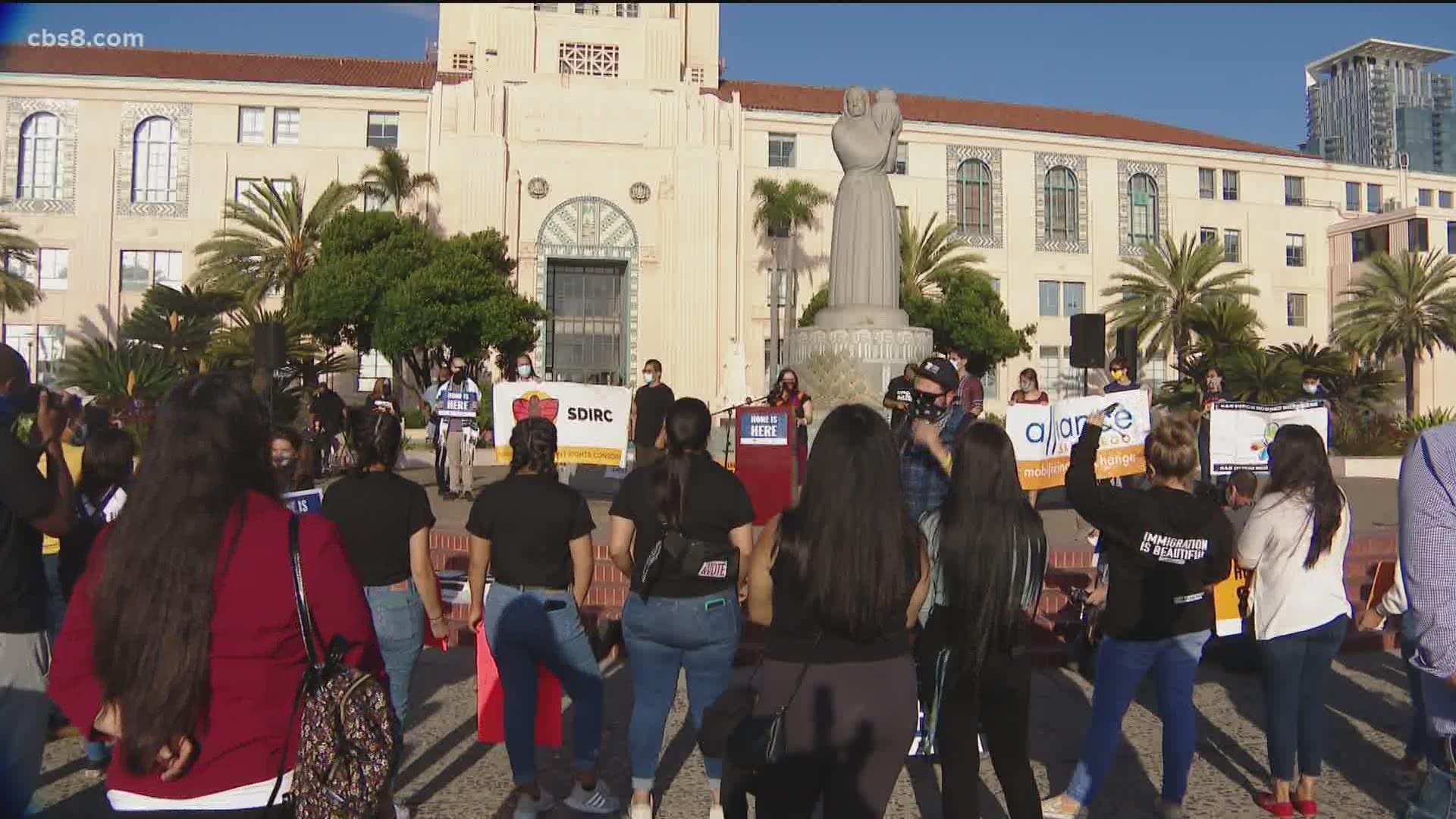 San Diego County is home to more than 40,000 Dreamers, who Thursday scored a major victory with the Supreme Court's decision..

Still, these DACA recipients who gathered at a rally at Waterfront Park along the Embarcadero said it is clear that their fight is far from over.

"We are celebrating the resiliency of our community," said Dreamer and activist Dulce Garcia. "Because it has taken years, years to get to this point!'

DACA, or Deferred Action on Childhood Arrivals, is an Obama-era policy that has allowed as many as 650,000 immigrants brought to the U.S. illegally as children to temporarily live. work and go to school here.

With Chief Justice John G. Roberts Jr. leading the majority, the nation's high court ruled 5-4 against the Trump administration, calling the decision to cancel the Deferred Action for Childhood Arrivals program arbitrary and unjustified. The program allows young people who were brought to the country as children to register with the government and obtain a work permit if they have clean records.

San Diegan Francisco Peralta Vargas is one of those recipients. Born in Mexico City, he came to the us at age 12, graduating from San Diego High School and, just last week, from UC San Diego..

Last fall, he traveled with other Dreamers to Washington DC, in advance of oral arguments before the Supreme Court..

"This is a Band-aid on something that needs surgery," said Peralta Vargas, speaking about the court's decision.

"We are a big part of the economic engine of this country, and we are just asking for a path to citizenship. We are law-abiding citizens," he added.

These Dreamers say they are pushing for a path to citizenship for all undocumented immigrants, and not just those who were brought here illegally as children..

"There is a dire need for immigration reform," Peralta Vargas said. "This is going to continue to be a very long  battle, and we will continue to fight!"

San Diego community leaders and Democratic elected officials hailed the U.S. Supreme Court's refusal Thursday to dismantle the Obama-era program that protects from deportation some 800,000 immigrants brought into the country as children, but cautioned that the fight is not over.

"DACA's creation back in 2012 allowed hundreds of thousands of young people in California to step out of the shadows and aspire to achieve great things. In these eight years, they have made incredible contributions to our cities, the state, and our nation as a whole," said Assemblywoman Lorena Gonzalez, D-San Diego.

"Today's news that the Supreme Court made the right decision to uphold this successful program is a welcome relief to so many of our neighbors, friends, and family members, but we must continue to push Congress for a comprehensive immigration solution that will protect our Dreamers from a tyrannical White House," added Gonzalez.

Senate President pro Tempore Toni G. Atkins, D-San Diego, said California "has the most active DACA recipients of any state, with more than 184,000 recipients, and over 50% of them women. They are our family, neighbors, and friends, and their talents will help our state succeed for generations to come.

"This decision is a win for equality and immigrant rights, and rounds out a week in which it truly feels like justice, and the rights of the people, have prevailed," she said. "America needed the positive outcomes of the DACA case and LGBTQ workplace protection case more than ever, and these rulings reaffirm that focus, commitment and courage can win the day."

Alliance San Diego, a human rights organization, described the decision as a "partial victory" for so-called Dreamers, as "the decision explicitly left out whether DACA was legally implemented in the first instance and merely addressed the manner the government eliminated the program."

Michelle Celleri, the human rights counsel for Alliance San Diego, said "this victory may be short-lived."

"It provides temporary relief for DACA recipients, but the Trump Administration will continue to try to institutionalize its hateful rhetoric," she said. "That is why it's so important to vote this November. In the meantime, we encourage DACA recipients to speak with legal service providers, including Alliance San Diego, to explore all avenues of protection and relief. Alliance San Diego will continue to provide information and support to DACA recipients as they navigate the uncertainty during this time."

According to the San Diego Regional Chamber of Commerce, the San Diego region is home to more than 45,000 Dreamers. One of those is Irving Hernandez, who said he was cautiously optimistic.

"This decision is such an important one for myself and the other DACA recipients who live in the southern border region, and face the additional violence and coercion of a militarized border," he said. "I am grateful to the Supreme Court for this important decision, but I know that our fight is far from over. Even with this decision, our lives continue to be in limbo and can change at any moment. We urge our elected officials and lawmakers to put forth a solution that protects all members of the immigrant community, and doesn't use Dreamers as bargaining chips."

"A legally absurd ruling today on DACA - Justice Clarence Thomas' dissent opinion nails the problems with the majority opinion. DACA itself was an illegal overreach by Obama - and Trump was simply undoing that overreach and asking Congress to make law," he wrote on Twitter.

President Donald Trump took to Twitter to call the DACA decision and other recent rulings "shotgun blasts into the face of people that are proud to call themselves Republicans or conservatives."

"The recent Supreme Court decisions, not only on DACA, sanctuary cities, Census and other, tell you only one thing, we need NEW JUSTICES of the Supreme Court," Trump wrote. "If the radical Left Democrats assume power, your Second Amendment, right-to-life, secure borders and religious liberty, among many other things, are OVER and GONE.

Rep. Susan Davis, D-San Diego, used the victory to call on the Senate to pass the House-passed Dream and Promise Act, which would extend protections to DACA recipients beyond the initial program.

"This ruling is a relief to thousands of Dreamers in America living in uncertainty. It's also a serious blow to President Trump's cruel immigration policies. Dreamers are contributing -- especially on the frontlines of the pandemic -- every day," she said.