Gov. Kim Reynolds laid out her vision for Fiscal Year 2022 and 2023 during her annual Condition of the State address. 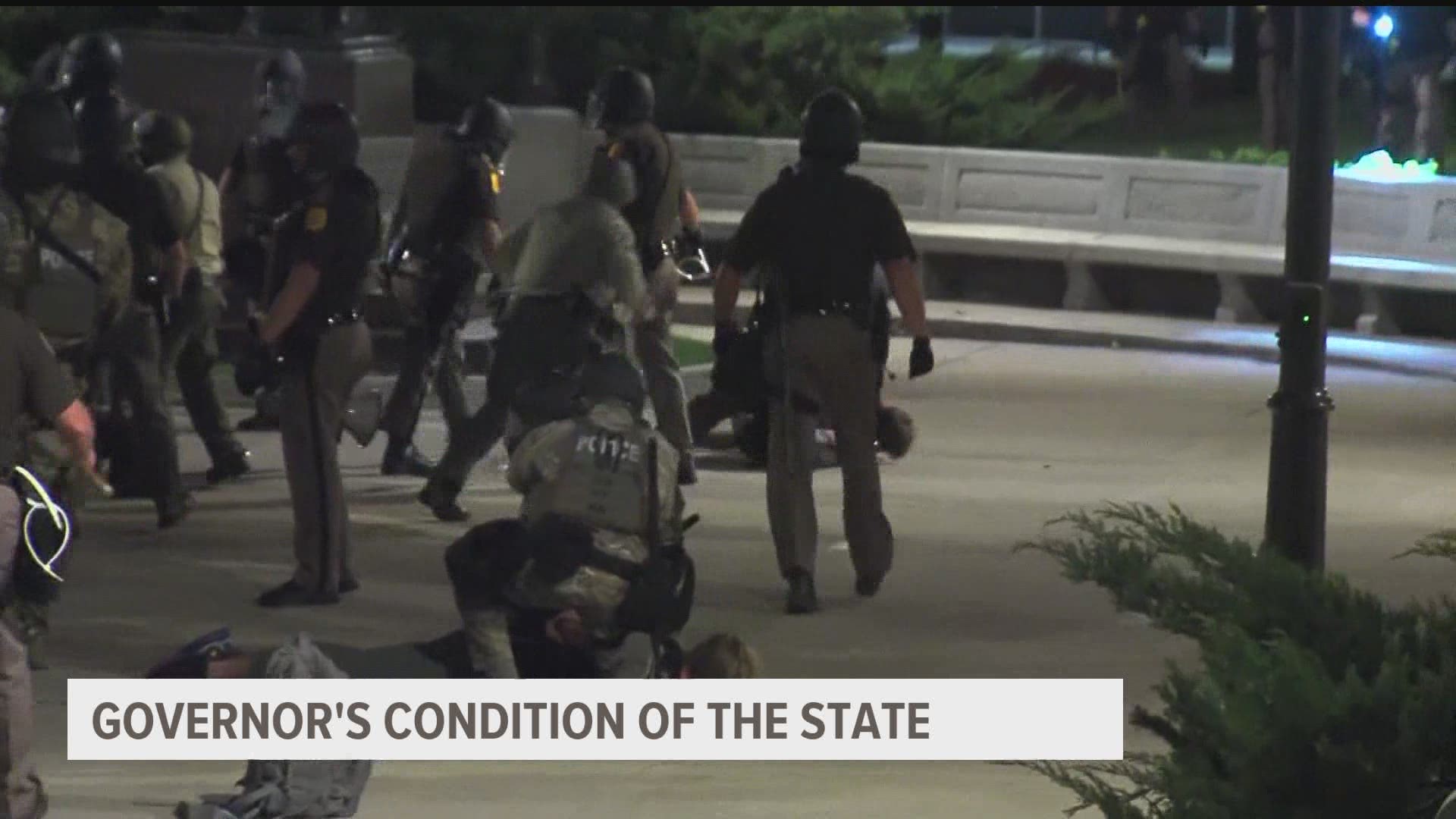 DES MOINES, Iowa — Iowa's governor said she plans to propose a bill that would withhold funding from local governments that reduce police budgets.

Gov. Kim Reynolds addressed the state legislature, judicial branch and Iowans Tuesday during her annual Condition of the State address.

The yearly speech laid out the governor's plans for the 2021 legislative session, many of which took a backseat in 2020 due to the COVID-19 pandemic.

During her address, Reynolds made it known where she stands on the issue of policing.

"We should never be afraid to talk about ways to improve policing, but there will be no talk of defunding the police here," Reynolds said during her address.

The governor said she'll introduce the Back the Blue bill, which will toughen penalties for injuring police officers and rioting. The bill will also ban racial profiling and will allow the state to withhold funding from local governments that defund their police departments.

The pandemic highlighted several inequities and problems in the state.

Reynolds proposed plans to get reliable, affordable broadband to all parts of Iowa by 2025 and continued to push for affordable child care.

"Even when the coronavirus is a distant memory, Iowa will still need an abundance of high-quality child care so that families can prosper and children can grow," Reynolds said.

Overall, Assistant House Minority Leader Jennifer Konfrst, D-Windsor Heights, said she can get behind a lot of what the governor proposed during Tuesday's address, but said she didn't agree with Reynolds' tone about the pandemic.

"It kind of seemed like a mission accomplished moment," Konfrst said. "It sort of felt like the pandemic was over and we were celebrating and that is not what it feels like in the community. It feels like the truth, which is that the pandemic is still raging in our state, and so I would have liked to see a little more recognition that we're not out of the woods yet."

One of the notable items in Reynolds' proposal is a push to require all schools to offer parents the option to send their students back to school 100% of the time.

The Democratic leader of the Senate, Zach Wahls said he's concerned about this plan.

"Everybody wants students back at school and the best way to do that is to bring the covid pandemic to an end and one way to do that would be to prevent the spread from becoming where it is," Wahls said.

Last year, Reynolds proposed a budget that included a multi-year plan to further reduce income taxes for Iowans. A one-cent sales tax hike proposed in 2020 to take effect in 2021 did not make the cut.

The governor also hoped to create a Constitutional amendment regarding abortions.

"We must protect life by making clear, through an amendment, that our constitution does not grant a right to an abortion,” Reynolds said in 2020. “It’s time, and unfortunately, it’s necessary.”

A Constitutional amendment did not happen, but Reynolds did sign a law that requires women to wait 24 hours before undergoing the procedure.

The law has been put on hold pending a lawsuit filed by Planned Parenthood.

Reynolds also asked for more funding for the Glenwood Resource Center last year. The Department of Justice investigated the state-run facility for individuals with disabilities, which found evidence of human experimentation.

You can also watch Gov. Reynolds' address on YouTube below

RELATED: Here's what the balance of power looks like in the Iowa Legislature