Rock Island State's Attorney reviewed the investigation and has referred the matter to the Juvenile Division. Victim, "I love the football team...they apologized." 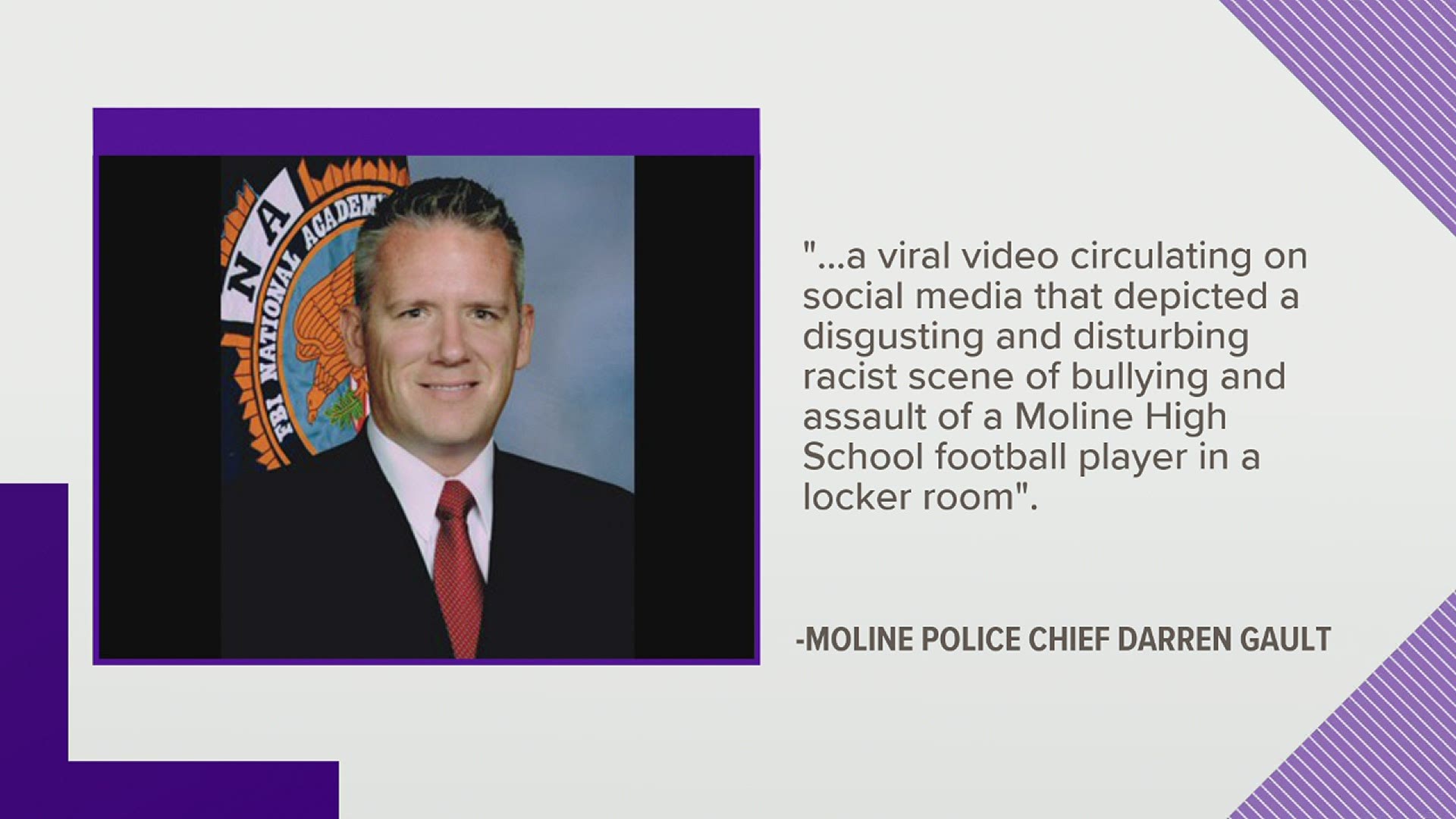 The Rock Island County State's Attorney completed their investigation and according to the press release they confirmed that the male juvenile in the depicted video is a student and football player at Moline High School.

In the Office of State's Attorney document it states, "Upon review of the facts and diligent investigation by the Moline Police Department, numerous witness interviews and cooperation by students and staff, this office has referred the matter for appropriate action in our Juvenile Division."

The laws in Illinois prohibit the public disclosure of any juvenile matters.

The juvenile involved in the incident issued the following statement:

“I want to make it known that I'm fine. Everyone is worried about me and showing concern for me and I really appreciate it. Second, can everyone please stop talking about the incident and video? I understand everyone wants justice for me and they want what they think is right to be done, but I already made my feelings known to the police and my friends about how I feel about everything. I love the football team I'm on and they're good guys. I know that personally. I talked to the people involved individually and they apologized. We had a heartfelt talk about it and I told them how I felt. So please don't harass, bully, or threaten them at all. Lastly, I want to get my life back together, and my student-athlete life back on track, so if you do ever see me or know who I am, treat me as a human first, not a victim.”

Police urge every member of the public to cease the sharing of the video on social media and respect the privacy of the juvenile involved.

The Moline Police Department says their investigation of an incident between Moline High School football team members has been turned over to the Rock Island County State's Attorney.

A press release from the police department says multiple student athletes, coaches and staff were interview throughout Saturday, regarding the video that was posted online. Police say those involved directly with the video are all friends.

"Regardless of these facts, we all agree that this is a disgusting way to treat a fellow teammate, a fellow human and most certainly a friend," Moline Police Chief Darren Gault said in the press release. "The role of the police department is to gather facts related to potential criminal offenses of state law. The investigation has now been completed and on April 10, 2021 at approximately 6:00pm, the case was turned over to the State’s Attorney Dora Villarreal for review."

The Moline-Coal Valley School District has also been provided an initial summary of the investigation done by police.

"The school district will conduct a separate investigation of any school code violations or district policies and those will be different than criminal law. Some terms such as hazing have different meaning in state law and school code of conduct. We all agree that regardless if the students viewed this as a joke, it is unacceptable behavior," Moline Police Chief Darren Gault said in the press release.

Police say everyone involved with the investigation, including parents, students and staff, were cooperative and understand the gravity of the situation.

UPDATE: 4/10/2021 4:00 PM :
The Moline-Coal Valley School District has released a statement after an incident between football team members in the locker room was videotaped and posted online.

The Moline-Coal Valley School District was notified Friday evening of a disturbing and distressing video involving a Moline High School football player. The district is cooperating fully with law enforcement and will ensure a thorough investigation is completed. The vile behavior depicted in the video does not represent our core values and has no place in our learning community. Clearly, we have work to do. Decisive action will be taken upon the conclusion of both the law enforcement and the school district’s internal investigation. Student safety and a welcoming environment remain the top priority for all Moline-Coal Valley Schools.

UPDATE 4/10/2021: Moline Police say they met the football team when they arrived at Moline High School Friday night. In a statement, the department says officers met with the victim in a video circulating on social media.

The police called the incident a "disgusting and disturbing racist scene of bullying and assault of a Moline High School football player in a locker room."

The police and Moline-Coal Valley School District are both independently investigating the situation.

EARLIER 4/9/2021: An incident that took place at Moline High School has prompted an investigation by school administrators as well as the Moline Police Department.

Friday evening, April 9, the police department took to Facebook to ask the public for information regarding the incident, "which was videotaped and is now circulating on social media."

The police department's Facebook post continued, saying "We are working with the Moline-Coal Valley School District to identify those involved."

The school's public relations director, Candace Sountris, confirmed the district was investigating the situation.  She said district officials were made aware of the video Friday evening.

Police said the incident happened Friday, but did not give other specifics.

If you have any information, you are asked to call the Moline Police Department's Investigations Division at 309-524-2140. You can also call Crime Stoppers of the Quad Cities at 309-762-9500.

The following is Rayapati's statement:

"As out-going President of the Moline-Coal Valley School Board and Mayor-Elect of Moline, I want to address the incident many in our community observed online Friday night, involving members of our high school football team.  As a human, I’m frustrated, dismayed, and appalled—among many other emotions. As a community leader and elected official, I know I, myself and fellow leaders have a responsibility to hold individuals involved in this incident accountable and intend to do just that.

"We must choose wisely, how we treat each other.  We must choose kindness, understanding and respect, and we have a duty as parents, role models and leaders to model this respect to each other each and every day. We must hold ourselves accountable for this incident occurring in our community and educate our children that this behavior is unacceptable. Because these are all of our children--those who have done egregious things and those who have had a terrible thing done to them.  No one has a right to dehumanize their classmate or teammate.

"I am a person of color.  I know what it means to be the only person in the room like yourself.  I know what it means to be misunderstood.  Our children deserve, especially in a school or school activity, to be understood and treated with respect and our entire community needs to be there for that.  Our entire community has a responsibility to decide what behavior we will not accept.

"We must let investigations take place according to appropriate protocols to address this behavior, but we can turn toward our neighbors, and show them the good that is in all of us.  We can find ways to reassure our children that they don’t have to fear this kind of treatment in Moline. There is no place for hate in Moline, and it is my mission to continue to make Moline a welcoming place for ALL—no matter your age, background, or color of your skin."