"That is not what we teach," Minneapolis Police Chief Medaria Arradondo said of Derek Chauvin's use of force on George Floyd. 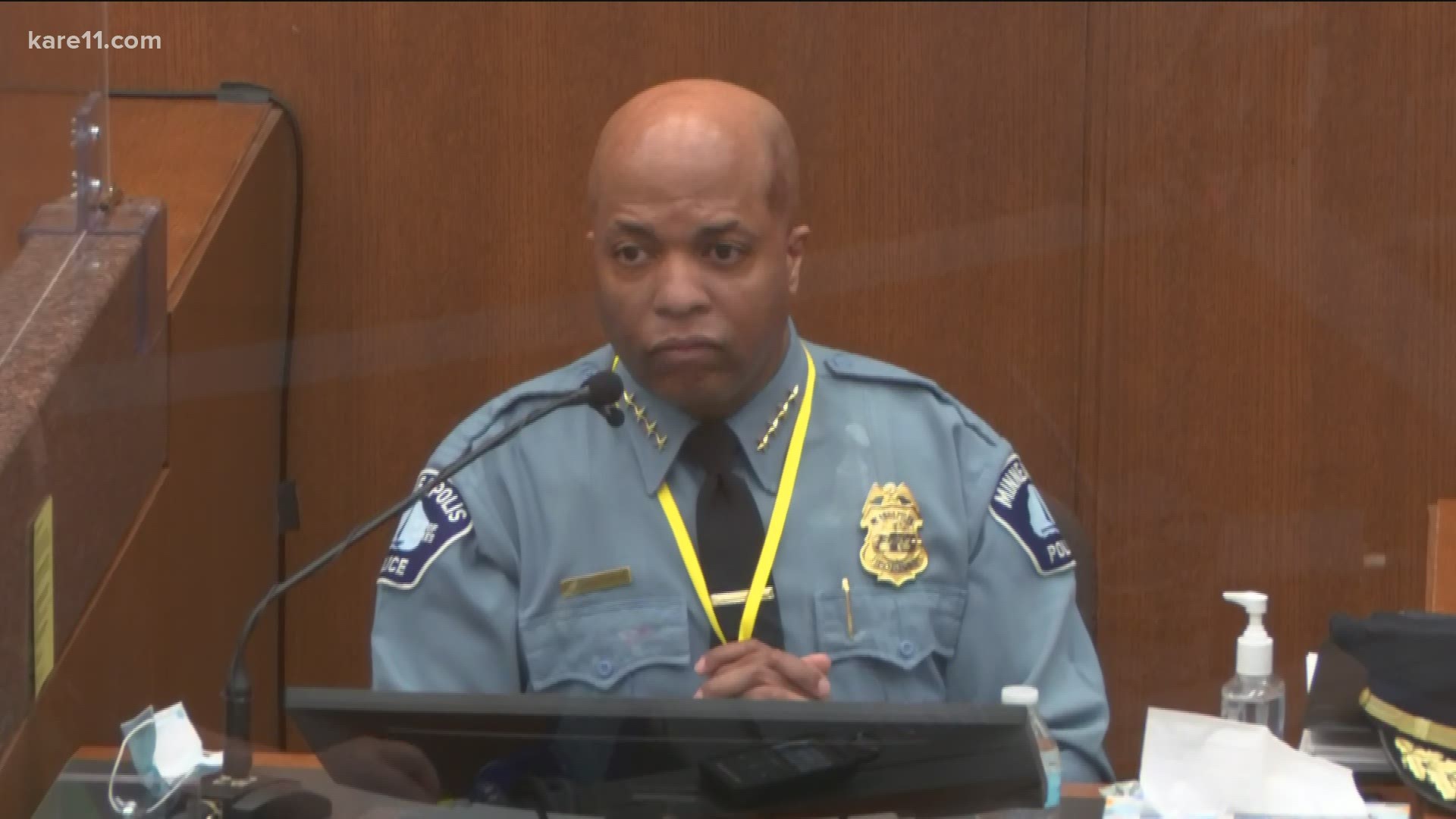 MINNEAPOLIS — Minneapolis' police chief testified in Derek Chauvin's murder trial Monday that the former officer's actions in the arrest of George Floyd violated multiple department policies, and that he should have rendered medical aid.

Chief Medaria Arradondo – who fired Chauvin and the three other officers involved in Floyd's arrest, and characterized the 46-year-old Black man's death as "murder" – was called to the stand by state prosecutors. He testified for most of the day.

Arradondo told the jury that Chauvin's restraint "is not de-escalation," nor a "trained" Minneapolis Police Department technique.

"It has to be objectively reasonable," he said. "We have to take into account the circumstances, information, the threat to the officers, the threat to others, and the severity of that. So that is not part of our policy, that is not what we teach."

Arradondo said the restraint should have ended "once Mr. Floyd had stopped resisting. And certainly once he was in distress and trying to communicate that."

"Once there was no longer any resistance, and clearly when Mr. Floyd was no longer responsive and even motionless, to continue to apply that level of force to a person proned out, handcuffed behind their back, that in no way, shape or form is anything that is by policy, it is not part of our training, and it is certainly not part of our ethics or values," Arradondo said.

Upon cross-examination by the defense, Chauvin's attorney Eric Nelson asked Arradondo to clarify the department's policy regarding neck restraints.

Nelson said that MPD policy defines a neck restraint as constricting one or both sides of a person's neck with an arm or leg without applying direct pressure to the trachea or airway. Arradondo responded that he thinks "light to moderate pressure" is important to note.

The policy also differentiates between a conscious and unconscious neck restraint, Nelson said. In the latter, the restrained person is rendered unconscious. Arradondo confirmed both were permitted by the department's policy on May 25, 2020, the day of Floyd's death.

The police chief clarified that he believes Chauvin was using a conscious neck restraint.

Nelson probed Arradondo about whether using a knee on someone's neck as a restraint is against MPD policy.

"It is contrary to our training to indefinitely place your knee on a proned, handcuffed individual for an indefinite period of time," Arradondo said.

Nelson also showed the chief a segment of bystander video, side by side with the same timeframe of body camera footage from former officer J. Alexander Kueng, who's among the three other officers charged with aiding and abetting in Floyd's death.

He asked Arradondo to confirm that in the body camera video, it looks like Chauvin's knee is on Floyd's shoulder blade rather than his neck.

Upon redirect, Arradondo told the prosecution that paramedics were already on the scene at that moment in the video. He said prior to that, he only saw Chauvin's knee on Floyd's neck.

Arradondo, the city's first Black police chief, first assumed the role of MPD's top cop in 2017. He took over the position after then-Chief Janee Harteau resigned following scrutiny in the case of Mohamed Noor, a former Minneapolis police officer who shot and killed an unarmed woman four years ago.

Noor was found guilty of third-degree murder and second-degree manslaughter in the fatal shooting of Justine Ruszczyk Damond. He's currently serving a sentence or more than 12 years in prison.

Arradondo had testified in the Noor case on MPD's body camera policy at the time of Damond's death.

RELATED: Derek Chauvin trial: What to expect in week 2

"He did testify in the Noor trial but what's different about this case is that he, of course, fired the four officers very quickly after this happened," Moriarty said. "He's also been very public in saying that this was murder, this was excessive use of force, and he has not been public in that way in the past."

Arradondo had fired Chauvin, and the three other officers involved in Floyd's arrest, within 24 hours. In June of 2020, the chief made a public statement that he believed Floyd's death to be a "murder."

"Mr. George Floyd's tragic death was not due to a lack of training—the training was there," he said at the time.

The chief will be among a number of law enforcement officials called to the stand this week to discuss police training and use of force policy. His testimony Monday was followed by MPD Inspector Katie Blackwell, who formerly served as commander of the department's training division.