Rep. Ras Smith, D-Waterloo called the verdict "historic" but "complex", citing the changes he believes still need made on both a state and national level. 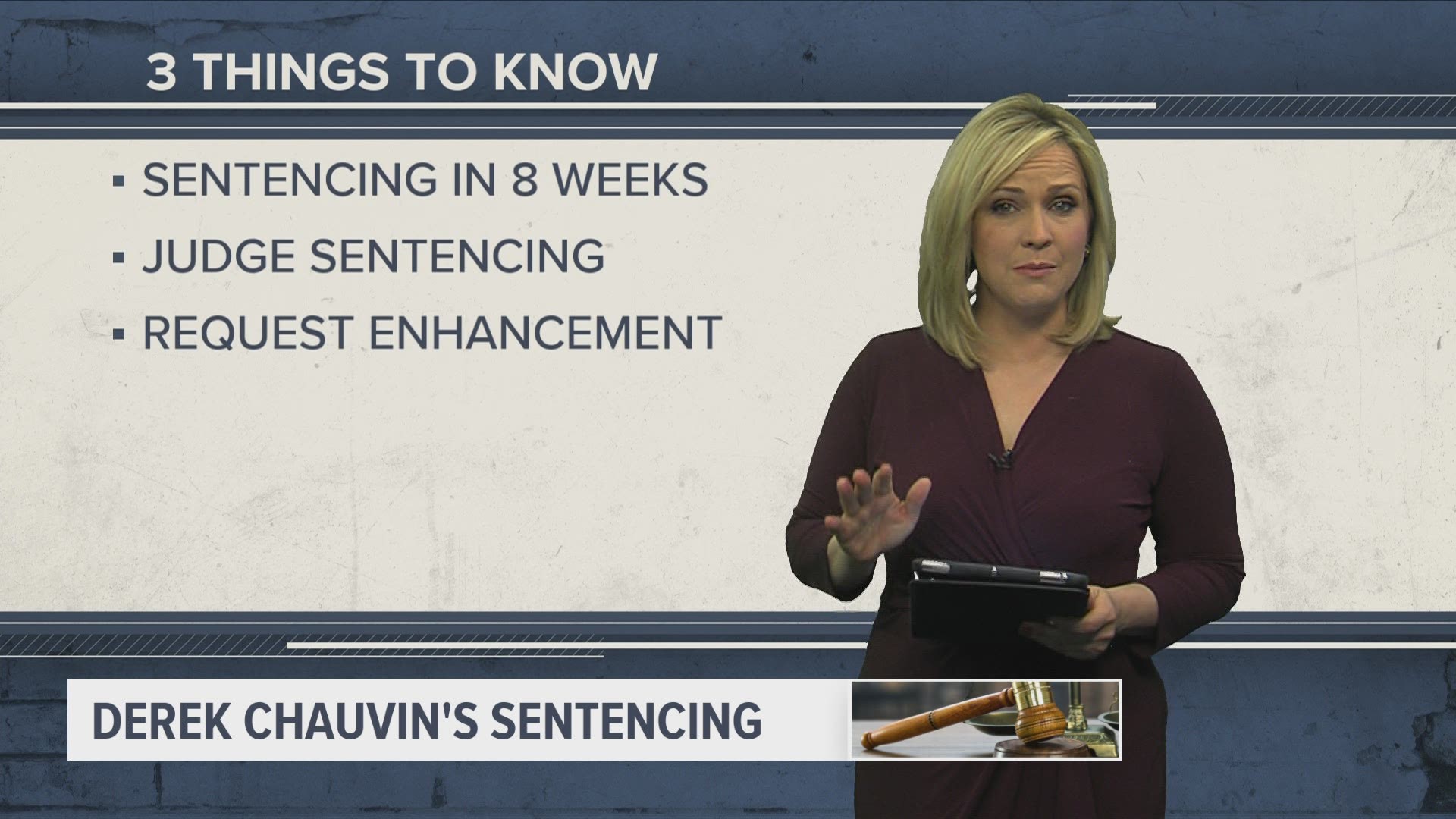 Former Minneapolis police officer Derek Chauvin was convicted Tuesday of murder and manslaughter in the death of George Floyd after less than 12 hours of jury deliberation.

He faces a maximum possible prison sentence of 40 years.

While the May 2020 killing and trial both happened in Minnesota, leaders and activists in Iowa are speaking following the verdict.

"Remember that even if Derek Chauvin is found guilty, that is not justice," Jaylen Cavil with the Des Moines Black Liberation Movement tweeted before the verdict came down. "Justice comes from the dismantling of policing in America and ensuring that cops can no longer execute Black people."

Reminder that even if Derek Chauvin is found guilty, that is not justice. Justice comes from the dismantling of policing in America and ensuring that cops can no longer execute Black people.

The statement reads in part:

"We are not victorious yet. We, like our ancestors, believe in abolition. Our hope is that, one day, prisons and police will vanish from this earth. We believe that justice will be served when no more blood from Black peoples’ bodies is spilled in the street. One murderous cop’s conviction isn’t enough to ensure it will never happen again.

"We believe George Floyd’s legacy to be more than another human put into prison, but to put an end to policing. To abolish a system that perpetuates the enslavement and slaughter of Black folks. To end the pigs ablility to murder, manipulative, abuse, traumatize and terrorize our community. To eradicate all systems that uphold white supremacy."

Hours after the verdict, Des Moines community members gathered at the Pappajohn Sculpture Park to celebrate the verdict. It was a fairly small gathering with around 30 people.

Organizer Pascha Morgan brought pizza to the event to celebrate knowing the fight for racial justice is far from over.

"The reason it was important to do it today is because the next bell is right around the corner," Morgan said. "So we have to celebrate when we have to celebrate. So tomorrow morning by the time I wake up, there will probably be a new battle. But today, I'm happy."

Norwalk High School senior Josie Mulvihill, another organizer of the event, said it was a good feeling to meet with others after the verdict.

"So when you see that there are other people who believe the same thing as you, who really hold the same convictions, it's very affirming," Mulvihill said. "Very much like, OK, like we are getting somewhere."

For others, the celebration was meant to uplift the voices of Black and brown Iowans.

"To be here just to uplift Black and indigenous and people of color's voices, I don't have all of the answers," said Vanessa Moranchel, another organizer of the event. "So I want to listen and I want to uplift their voices and the work that they want to get done."

RELATED: A look at high-profile cases over killings by US police

Rev. Rob Johnson said he won't be celebrating the verdict because the fight for equality is not over.

"We’ve been yelling 'Black lives matter' for years now. This is just one step in the process. Just one! Just one!" Johnson said. "So people ask me all the time, 'Rob, are you going to celebrate?' Probably not. I’m not going to celebrate and here’s why: because there’s work that we have to do."

In an interview with Local 5, Iowa-Nebraska NAACP President Betty Andrews agreed with Johnson.

"I think that what we're experiencing today is the immediately addressing the cultural trauma. So when you're seeing people hugging and feeling a bit of relief, that could be an initial reaction," Andrews said. "But the reality is, it's too soon to tell whether or not this is a watershed moment that will move us completely forward."

Around the same time the verdict was being read, a police officer in Columbus, Ohio shot and killed a 16-year-old girl. TEGNA station WBNS spoke with the girl's mother, who said the girl's name was Ma'Khia Bryant.

Andrews said this child's death puts an exclamation point on the fact that this fight isn't over.

"It is something that we realized that we still have to keep moving forward whether in terms of pressing for justice and adjusted justice is an action it's not the end of this journey," Andrews said.

Des Moines Selma leader Justyn Lewis texted Local 5 with his thoughts about the verdict. He agreed to do an interview to elaborate on his thoughts.

"It's hard to cheer and celebrate. Because this was what's supposed to happen. It's what is supposed to happen. We're supposed to see the justice system work in this way, and we haven't," Lewis said. "We haven't seen it work this way ever. So like, I'm, I'm thankful for it working the way it is but it's a drop in the bucket of what needs to be done."

Lewis said continuing the conversation about systemic racism is critical to help end it.

MarKaus, an entrepreneur, recording artist and host of "Sunday Supper with MarKaus," told Local 5 he also has mixed emotions about the guilty Chauvin verdict.

"Of course I was happy for the family. I'm happy for the generation to be able to see a semblance of justice being executed," MarKaus said.

When it comes to moving the conversation forward in Iowa, MarKaus said he feels there are a number of things to deal with, but one that is most important to him.

"There needs to be more for in my opinion, economic opportunity for our community. You know once you see those things begin to trickle down, it opens the doors for a multitude of other conversations and so I know in my team, we, we focus on creating economic opportunities, more so than anything else," MarKaus said.

Connie Ryan with the Interfaith Alliance of Iowa said action is needed in Iowa, like white people listening to the struggles of Black and brown people to understand is necessary.

"it is advocacy at our statehouse as well, we have some legislation that has gone through both chambers in the statehouse that are quite egregious, and making sure that you're using your voice to stand up [against] the bad pieces of legislation," Ryan said.

Hawkeye football head coach Kirk Ferentz also released a statement on the verdict, addressing how the program has been facing accusations of racism.

"In our program, this has been a year of listening to candid conversations about the real racism and inequality that exists for many on our team," Ferentz said.

RELATED: Obama: Chauvin guilty verdict 'a necessary step on the road to progress'

Al Womble, chair of the Iowa Democratic Black Caucus, told Local 5's Eva Andersen he felt "a great sense of relief" after the verdict came down.

Over at the statehouse, Local 5's Rachel Droze spoke with state Rep. Ako Abdul-Samad, D-Des Moines. He said while accountability was served Tuesday, there is still a lot of work to do for justice.

Another voice from the Iowa Capitol spoke out via Twitter video. Rep. Ras Smith, D-Waterloo, simply tweeted "Guilty but not over."

In the video, Smith said he felt confused about the verdict.

"That guilty verdict is important. It justifies, it shows that our fights for equity are true, and it gets us through this time," Smith said. "But real accountability, real change, true justice is what gets us through a lifetime. And so our work must continue."

Guilty but not over pic.twitter.com/g7DFSHBmSJ

In an interview with Local 5 Wednesday morning, Smith called the verdict "historic" but "complex", citing the changes he believes still need made on both a state and national level.

"It felt like a victory when our criminal justice system is one that's designed, at least in theory, that is supposed to apply justice ... is supposed to apply righteousness to these situations," Smith said. "And so when we see it happen few and far between, it feels like that. And so for me, that's the conflict that exists. This shouldn't be a one-off instance, it should be a normal thing that we get to experience. And there shouldn't be so much elation when justice is served. That should be the norm, not the exception."

When asked about former Minneapolis police officer Derek Chauvin being convicted on all counts in the killing of George Floyd on Wednesday, Gov. Kim Reynolds responded:

"It shows that our legal system worked and that justice is being served. The jury, a jury of his peers found him guilty on all three charges and so I think the system worked, due process. And it's time that we all come together as a country, heal and continue to move forward."

The governor added the current legislative session will "continue to work" on a "Back the Blue" bill that would install qualified immunity for officers and increase the penalties on rioting and violent protests.

Democratic Rep. Cindy Axne, IA-3, was the first of Iowa's congressional delegation to speak out after the verdict, saying in part:

"And while justice was served today, the efforts undertaken in George Floyd’s name – efforts to combat injustice and systemic racism — are unfinished. For the sake of all those whose justice is still unwritten, we must continue to demand the reforms that will protect people of color in this country from discrimination, bias, and abuse.”

While justice was served today, the efforts undertaken in George Floyd’s name – efforts to combat injustice and systemic racism — are unfinished.

Read my full statement on the verdicts delivered in the Derek Chauvin trial: https://t.co/cwZwkTonat pic.twitter.com/RHjS8Fnv6R

“I respect the court’s ruling. I believe in due process and that the American court system delivers justice.”

"Everybody in the United States if you watch television over the last 10 months, know about the murder, of Floyd, and you got to be appalled by it. And then beyond that, you know, the Constitution provides for a system of juries. And the judicial branch of government as an independent branch, as it should be," the senator said. "And if you take an oath to uphold the Constitution like I do, you got to accept the verdict of juries."

Requests for comment from Reps. Randy Feenstra and Mariannette Miller-Meeks, along with Sen. Joni Ernst, were not immediately returned.