Watch hometown sailors at work on the USS Dwight D. Eisenhower in the Atlantic Ocean

The U.S. Navy reached out to a select number of TV stations across the country for a unique opportunity to fly out to an aircraft carrier, spend the night, and ... 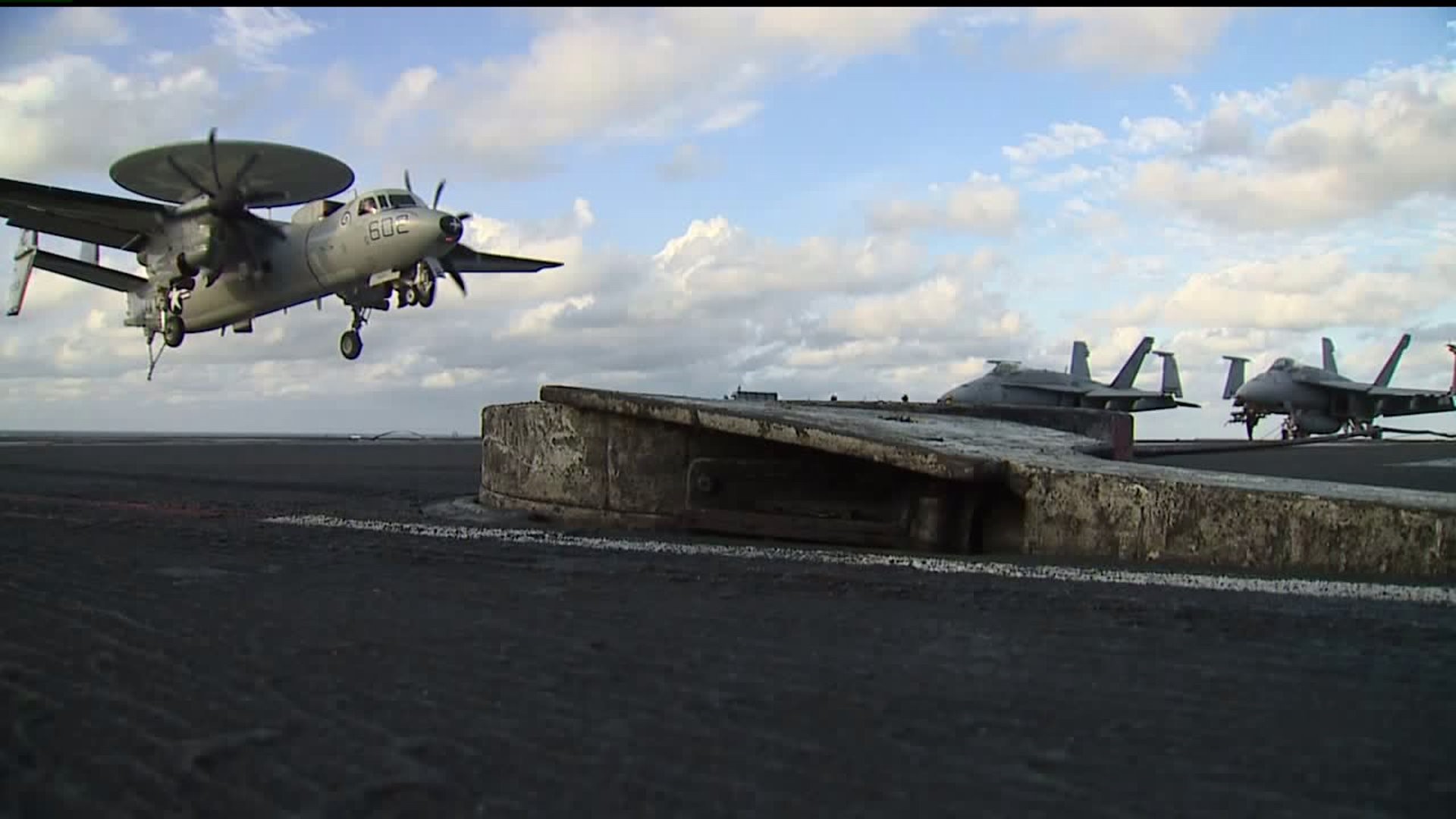 NORFOLK, Virginia — At all hours of the day, more than 5,000 sailors in the United States Navy operate, launch aircraft and maintain the USS Dwight D. Eisenhower.

The U.S. Navy reached out to a select number of TV stations across the country for a unique opportunity to fly out to an aircraft carrier, spend the night, and meet sailors from our respective viewing areas.

When WQAD landed on the flight deck on a C2 Greyhound, the USS Dwight D. Eisenhower (CVN 69), also known as the "Ike" was underway a so-called sustainment phase.

Upon arrival to the ship on Monday, April 3 the Ike was stationed about 150 miles off the coast of Naval Station Norfolk.

"I am from Clinton, Iowa," said AT1 Petty Officer 1st Class, Rob Mathiesen who grew up in Clinton and graduated from Fulton High School. AT1 Mathiesen is part of the Carrier Airborne Early Warning Squadron. They call themselves the "World Famous" screwtops.

His job is to work on the electronics of an E2C Hawkeye. It's unique for its large saucer on top.

"Same thing as your weather radar," said AT1 Mathiesen from the hanger bay of the Ike.

The saucer detects an enemy from father out than anything else to relay a warning back to the carrier.

An aircraft carrier is a crucial tool for the U.S. Navy. It's basically a portable airport - able to store dozens of various aircraft. At the time WQAD was there - 55 aircraft were on board. The aircraft are the primary weapon of an aircraft carrier.

"We go in and run all the systems make sure they're all working properly," said AT1 Mathiesen. It's his job to make sure the E2C is ready for a pilot to fly.

"They put their trust in us which is really a big deal," said AT1 Mathiesen, who will have been in the U.S. Navy for 13 years in June, "I decided I wanted to see the world and try something different," he said.

Each sailor joins for their own reason. Now, they all work toward a common goal of forward defense. The Ike is ready to deploy at a moment's notice. F-18 engines are maintained on board, pilots train around the clock.

While WQAD was there, the NCAA Final Four was happening; sailors could watch coverage in front of a large projector screen in the hanger bay.

There is also a gym.

"This is my escape from my normal day to day job of working down in the reactor plants," said Lieutenant Commander Kevin Garner as he exercised on an elliptical with an incredible view of the Atlantic Ocean.

Sailors also get online to contact home, until the can't.

He travels the halls of the Ike to help with technology issues.

"I decided to join senior year, looking back it doesn't make any sense I sort of just took a chance to be honest. It really did work out its pretty great," said ITSA Justin Koellner, who has always been good with computer and says he got the job he wanted in the U.S. Navy.

Communication on the 3-acre flight deck is a lot different than anywhere else on the ship. It is very dangerous and very organized; at times so loud, hand signals are the only way to talk.

It is incredible to witness an F-18 landing on the relatively tiny flight deck. The fighter jets fly at full power as they land just in case they don't catch the so-called "trap", which consists of a metal cable strung across the deck that catches a hook connected to the outside of an F-18. If they don't catch the trap, the pilots can pull up and try again.

"As an AW, I love flying especially in a helicopter," said AWR2 Austin Guyton, an aircrewman who flies in the MH 60R Helicopter.

"I can hang out the door, just see everything from a birds eye view, it's great," said AWR2 Guyton who graduated from Moline High School in 2010 and signed a 6-year contract with the U.S. Navy in 2010.

His job is located in the body of the helicopter and his primary mission is surface and anti-surface warfare.

The MH-60R drops buoys into the water to pinpoint sounds to send back to the carrier.

"If they want us to engage it we'll be loaded with a torpedo," said AWR2 Guyton.

The Ike returned from deployment on December 30, 2016. She first conducted operations in the Mediterranean then transitioned in the Persian Gulf where temperatures reached a heat-index of 140-degrees.

"It was good, it was fairly, it was hot, but other than that it wasn't that tough," said AT1 Mathiesen.

"I never felt like I served my country really. Um, but after this deployment, definitely," said AWR2 Guyton.

For ITSA Koellner, feeling like he gets to feel a part of something is his favorite part about being on board.

"Like I am doing something greater," said ITSA Koellner.

"We're trying to keep everybody safe. We work hard and we make sure that we get done what we need to get done to defend our country," said AT1 Mathiesen.