Trains will no longer blow their horns in parts of Muscatine

Starting just after midnight on February 23, the Canadian Pacific engineers will not be blowing their train horns in Muscatine. 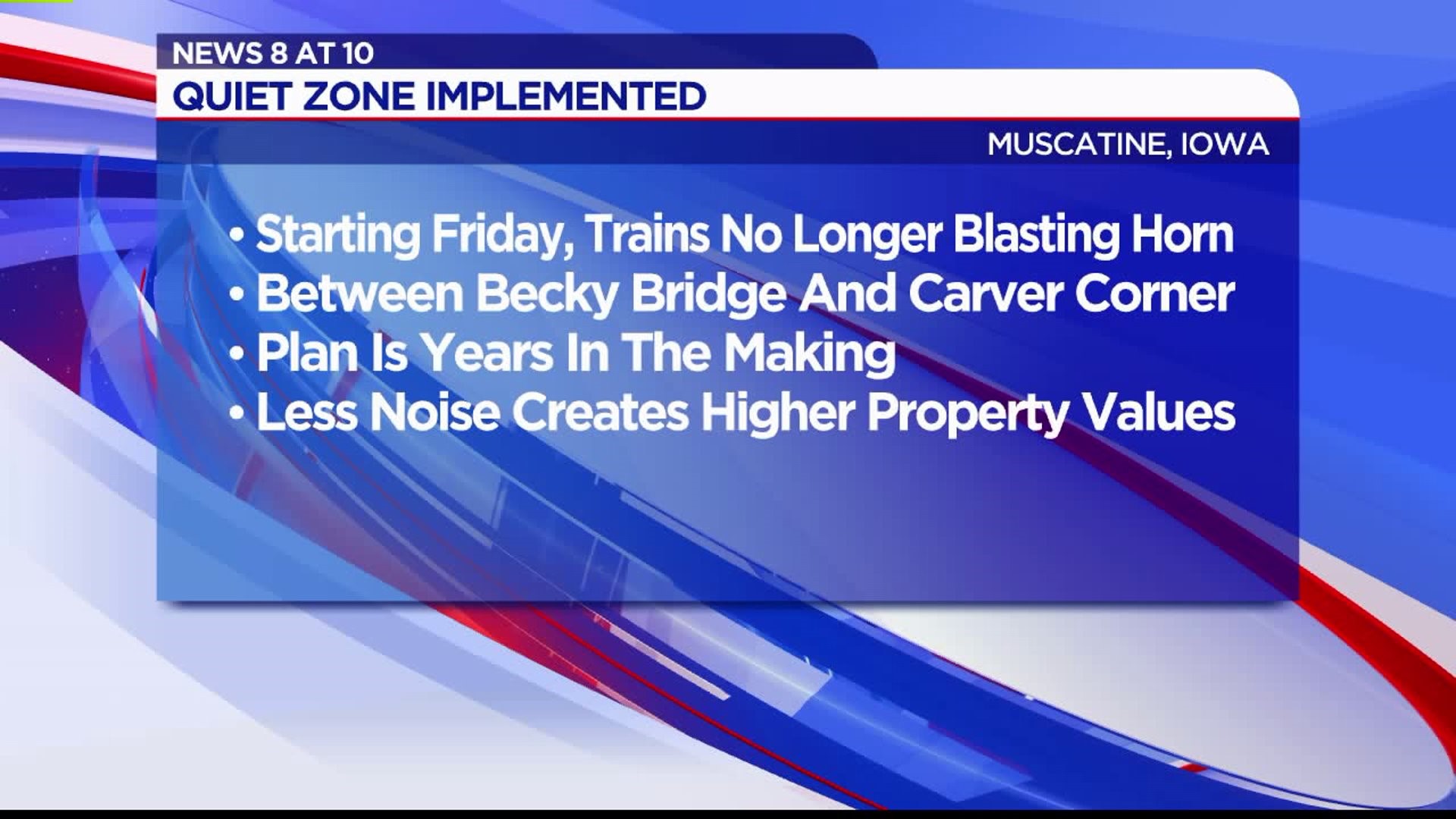 MUSCATINE, Iowa - Looking both ways before crossing the train tracks has always been an important lesson to remember, but for people in Muscatine, that practice is one that will need to be put to use now more than ever before.

That's because starting just after midnight on February 23, the Canadian Pacific engineers will not be blowing their train horns anymore as they approach crossings from the Norbert F. Beckey Bridge to Carver Corner in Muscatine.

The city will now honor a new 24 hour "Quiet Zone" along the railroad.

The goal of the Quiet Zone is to assist businesses and to assist residences who live near the railroad tracks in the downtown area, according to Dave Gobin, Community Development Director for the City of Muscatine.

Eliminating the horns should help eliminate the interruptions many companies experiences during business meetings and could even lead to an increase in property value in the downtown area according to Gobin.

Don't worry though, the change did not come without a lot of thought and precaution. A press release from the City of Muscatine said It took years to go from the study and planning stages to the actual construction of safety measures, and eventually to the actual establishment of the Quiet Zone.

“Canadian Pacific was good to work with and we received some good guidance from the FRA,” Gobin said. “All parties involved wanted to see a Quiet Zone established in Muscatine but safety was the biggest issue. I believe this is another positive move forward in the development of the riverfront and downtown areas.”

Plans are already being developed to expand the chicanes on the trail crossings to accommodate tandem bicycles and bicycles pulling carts.

The use of four gates, instead of the more common two gates, to block entry into the crossing and two to block exit from the crossing, encourages drivers to remain safely behind the gates and not drive around them.

There is even exit senors on the gates that can sense a car on the tracks and allow the gate to be released so the car can escape any danger.

There will be an increase in time between when the gates are lowered to when the train will pass through the area.

And possibly the best news of all, not much funding came from tax payer dollars was spent during this transition, according to the city.

“This was private money that funded most of the improvements for the Quiet Zone,” Gobin said.