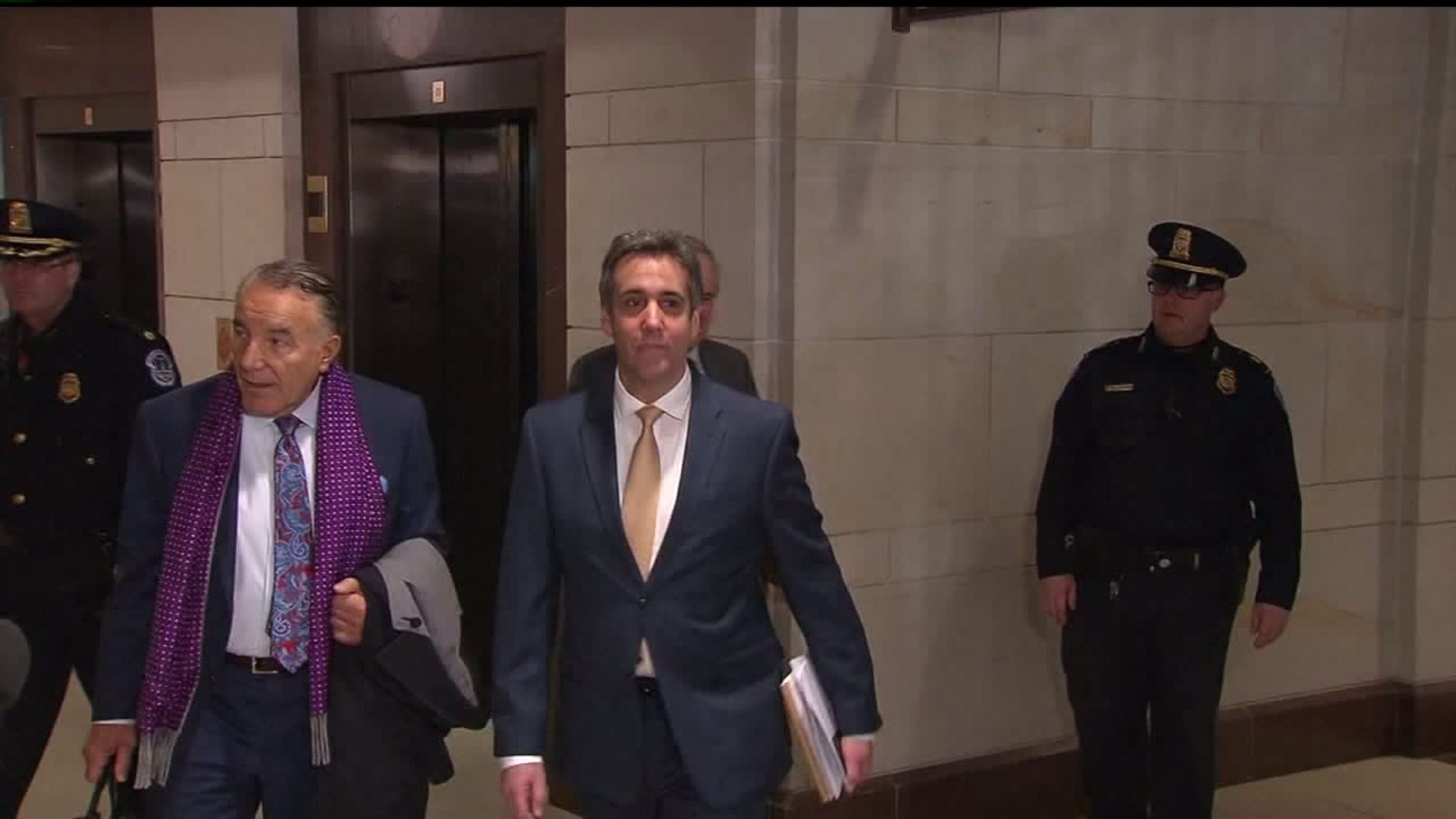 (CNN) -- Hundreds of pages of search warrant documents for Michael Cohen released Tuesday give the public a new understanding of how special counsel Robert Mueller has tackled his broad mandate and provide fresh details of the investigation into President Donald Trump's former lawyer and fixer.

The materials show that Cohen was an early target of Mueller's investigation into possible collusion between Trump's campaign and Russia and obstruction of justice, and came under intense scrutiny from New York federal prosecutors, with investigators seeking everything from Cohen's email accounts to phone records to historical data of his cell phones' locations the month before the 2016 election.

The Cohen-related material that has posed the greatest potential danger to the President comes from the Southern District of New York's investigation into the hush-money payments to women alleging affairs with Trump. The search warrant materials related to that matter, however, were redacted in Tuesday's disclosures.

Here are the biggest takeaways from Cohen's search warrant documents:

It didn't take Mueller's team long to start ramping up its probe into Cohen, search warrants unsealed Tuesday show, and the special counsel's office likely took a similar tack with its other targets.

Prosecutors and the FBI were given approval to search Cohen's various email accounts in July, August and September 2017, as the investigation into Trump's then-personal lawyer played out quietly behind the scenes before any charges had been filed by the special counsel's office.

It's been a familiar pattern for Mueller's investigation where the public only learns about investigations into key figures months later -- often through court filings -- like when former Trump campaign adviser George Papadopoulos' guilty plea was revealed in October 2017 on the day that Mueller's first charges were unsealed.

Republicans have criticized Mueller's investigation for stretching on for nearly two years, and many have urged him to wrap it up already. But the search warrants released Tuesday show that Mueller's team has moved at a swift pace throughout its 22-month probe, with months of investigative work preceding the actual public filing of charges.

If Mueller is in fact nearly done, the length of his investigation could be dwarfed by similar probes, like special prosecutor Ken Starr's investigation into President Bill Clinton.

Cohen's campaign finance crimes -- in which he made or orchestrated payments to silence women during the 2016 presidential election who claimed sexual encounters with then-candidate Trump -- were arguably the most significant charges against him because he implicated the President when he pleaded guilty, but the documents released Tuesday contain only redacted material related to those payments.

That's because the campaign finance violations are related to an ongoing Manhattan US Attorney's investigation into whether any executives at the Trump Organization committed crimes connected to the company's efforts to reimburse Cohen for the hush money he paid to one of the women, adult-film actress Stormy Daniels, CNN has previously reported.

After media organizations, including CNN, sought to have the search warrant materials redacted, Manhattan federal prosecutors argued that they should be able to redact information related to ongoing probes, and US District Court Judge William Pauley agreed.

"The Government represents that aspects of its investigation remain ongoing, including those pertaining to or arising from Cohen's campaign finance crimes," Pauley wrote in his order. "Indeed the search warrant applications and affidavits catalogue an assortment of uncharged individuals and detail their involvement in communications and transactions connected to the campaign finance charges to which Cohen pled guilty."

The inquiry regarding the Trump Organization has been active since Cohen pleaded guilty in August 2018, and last month CNN reported that federal prosecutors in New York had requested interviews with executives at the company.

Prosecutors may not have seen all of Cohen's emails

The search warrant materials document prosecutors' ability to examine multiple email accounts held by Cohen, but one matter left unexplained by the materials is why prosecutors appear to have been unable to search the account he used while working for Trump's family business, the Trump Organization.

Prosecutors sought to examine that account, according to the documents, but weren't able to do so. "Indeed from my involvement in this investigation, I know that Cohen had an email account with the Trump Organization, but the [US Attorney's Office] and FBI have not been able to obtain the contents of that account to date," the unnamed FBI agent who filed the affidavit for the search warrant application wrote.

But since material seized from Cohen had to go through a process wherein a third party determined what was subject to attorney-client privilege -- and it doesn't appear that any material seized after the April 9 searches went through such a process -- it is unlikely that prosecutors were ultimately able to review Cohen's Trump Organization email account, at least not via a search warrant.

Cohen was investigated for other possible crimes

When Cohen was sentenced to three years in prison in December, Judge William Pauley said that Cohen had pleaded guilty to "a veritable smorgasbord of fraudulent conduct."

He was actually investigated for even more crimes that he wasn't ultimately charged with.

Federal investigators asked for access to records related to Cohen's consulting business, Essential Consultants LLC, which was also the shell company used to make the hush-money payments to women.

It's not clear exactly why Cohen wasn't charged with those crimes. One possibility is simply that investigators didn't have enough evidence to charge him with those crimes. Another is that when Cohen agreed to plead guilty, prosecutors agreed to drop other potential charges.

Violations of the foreign lobbying law, the Foreign Agents Registration Act, have rarely been prosecuted, although Mueller's investigation -- including charges against former Trump campaign chairman Paul Manafort and his deputy Rick Gates — has shown that sentiment could be on the way out.

Cohen has company as someone who was questioned over foreign lobbying work but not ultimately charged: former Trump national security adviser Michael Flynn was scrutinized for his Turkish business, but he was charged by Mueller only with lying to the FBI.

Mueller probably knows a lot more than he's let on

Mueller has not spoken publicly since he was appointed special counsel in May 2017. Instead, the special counsel's office has let its court filings do the talking to lay out its cases against senior Trump officials and Russian intelligence officers it says hacked Democrats during the 2016 campaign.

But the search warrant documents show just how much Mueller's team has uncovered in its 22-month investigation, which has led to charges against 37 individuals and entities.

Mueller's team was allowed to review years of Cohen's emails and other online data during his time working for Trump. Prosecutors and the FBI sought search warrants for Cohen's various email accounts beginning in July 2017, and received approvals in November 2017 and January 2018 to track Cohen's incoming and outgoing calls. The search warrants sought Cohen's emails related to his business dealings under a shell company used to cut hush money deals with women accusing then-candidate Trump of extramarital affairs, which Trump has denied.

It's still unknown what Mueller will say when he submits a report to Attorney General William Barr concluding his investigation, but the material offered in the search warrant documents provides a small glimpse into the depth of Mueller's information-gathering.

When Democratic investigators like House Judiciary Chairman Jerry Nadler and House Intelligence Chairman Adam Schiff say they want to obtain Mueller's underlying evidence, this is what they're after.

CORRECTION: This story has been updated to correct the length of the Mueller probe compared with similar investigations.