Protesters back in St. Louis streets after night of violence

On Monday, protesters were locking arms on Market Street, a few blocks from the site of the previous night’s violence. 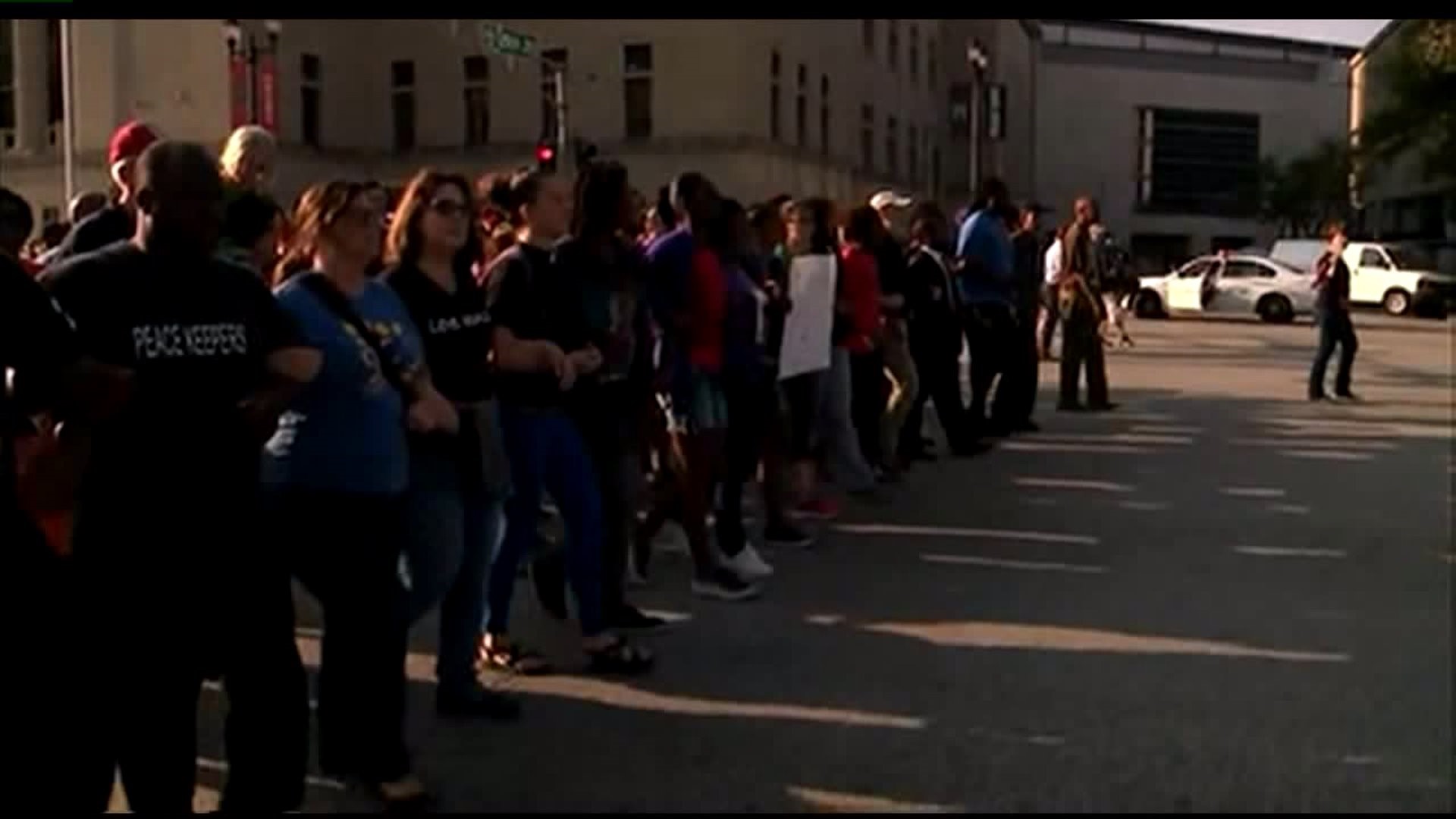 (CNN) -- Protesters angry over the acquittal of ex-police officer Jason Stockley, a white cop on trial for murder in the shooting death of a black man, were back in the streets of downtown St. Louis early Monday after demonstrations the previous night turned violent.

On Monday, protesters were locking arms on Market Street, a few blocks from the site of the previous night's violence.

"Protesters were mostly silent," said Bryan McClellan, who participated in the demonstration. "We want to achieve one goal -- an end to the disparate killings of black citizens at the hands of police."

It was the fourth day of protests, which began Friday after Stockley was acquitted in the killing of 24-year-old Anthony Lamar Smith. Though the Stockley incident happened almost three years before Officer Darren Wilson killed Michael Brown in nearby Ferguson, Missouri, the unrest in Ferguson renewed interest in the case.

Photos: The weekend in St. Louis

Sunday night's demonstrations began peacefully, but erupted in violence after nightfall, officials said. Amid the melees that ensued, some protesters broke concrete flower pots and used the broken pieces as projectiles.

"Some criminals assaulted law enforcement officers and threw chemicals and rocks at them. All of the officers' injuries were minor or moderate. All will be returned to duty soon," acting Police Commissioner Larry O'Toole said. "We're in control. This is our city, and we're going to protect it."

According to multiple reports, including that of St. Louis Post-Dispatch photographer Dave Carson, officers chanted, "Whose streets? Our streets!" after making arrests Sunday night along Tucker Boulevard. The Post-Dispatch is a CNN affiliate.

'This is not acceptable'

The St. Louis County Police Department tweeted a photo of a fireman "decontaminating our officers" after "unknown chemicals (were) thrown on them downtown."

Another police tweet showed a collection of protective gear and weapons, including a handgun, that authorities say were confiscated from a "rioter."

Carson tweeted that among the arrestees was Post-Dispatch journalist Mike Faulk. Carson called it a "mass arrest" and said people complained they were given no way to exit. Faulk's last tweet of the night said, "Less than 100 of us including media blocked in at wa and Tucker all four sides. People moving toward bike cops looks like best option."

The St. Louis Metropolitan Police Department did not immediately return calls inquiring about the nature of the arrests.

St. Louis Mayor Lyda Krewson said the majority of protesters were not violent and blamed the vandalism on agitators.

"The days have been calm, but the nights have been destructive. After the demonstrations, organizers announce that the daytime protests are over. But a group of agitators stay behind, apparently intent on breaking windows and destroying property. This is not acceptable," Krewson added.

While lending her support to law enforcement, Krewson conceded, "We have work to do here in the city. We need more and better opportunities for all our citizens."

Stockley shot and killed Smith in December 2011. The officer and his partner, Brian Bianchi, tried to stop Smith after witnessing a suspected drug transaction, according to an internal police department report the Post-Dispatch obtained.

Stockley said Smith backed into their police SUV twice in an apparent attempt to harm them. After Bianchi told Stockley that he believed Smith was armed, Stockley exited the SUV with his department-issued handgun. He also had a personal AK-47 pistol, a violation of department policy, according to the report.

Smith sped away, knocking Stockley sideways, and Stockley fired at the vehicle, before Bianchi and Stockley pursued Smith at speeds up to 80 mph. The police vehicle crashed into Smith's Buick in an attempt to avoid hitting a truck, the report said.

Before the crash, Stockley was heard saying he was "going to kill this motherf***er" and told Bianchi to "hit him right now," the report said.

Stockley approached with his weapon drawn. He said in the internal report he ordered Smith to show his hand and believed the suspect was reaching for a handgun, the report said.

"In fear for my safety and that of my partner," Stockley said in the report, "I discharged my department-issued firearm at the subject striking him in the chest."

Stockley then entered Smith's car "to locate the weapon and render it safe," the report said. He removed ammunition from the silver revolver, he said in the report.

Forensic analysis revealed that Stockley's was the only DNA present on the gun he said belonged to Smith, the criminal complaint said.

Prosecutors alleged that Stockley planted the gun, but the judge in the bench trial didn't buy it.

In his ruling Friday, St. Louis Circuit Judge Timothy Wilson said the prosecution's argument was "not supported by the evidence." The gun was too large, Wilson said, for Stockley to hide it from the cameras at the scene.

Stockley had opted for a bench trial in which a judge decided the verdict instead of a jury.

The city had been on edge for days during the trial, and demonstrations began soon after the acquittal was announced.

On Friday some protesters locked arms and prayed together, but within hours others smashed the windshield of a police vehicle and threw water bottles, rocks and bricks at law enforcement.

St. Louis police said the demonstrators later threw rocks at the mayor's home and that 11 law enforcement officers had been injured.

At least 33 people were arrested, according to a police tweet. Video footage showed officers using tear gas to disperse the crowds after police said the protests were considered an unlawful assembly. O'Toole said his officers used pepper balls.

On Saturday, peaceful protests also heated up with a group of protesters throwing bricks, rocks and projectiles with paint at police as officers tried to disperse the crowds. Nine people were arrested.

Some people vented about the court's decision to acquit Stockley, while others called for some city leaders to step down.

After Friday's ruling, Smith's family said they believed the judge had made the wrong decision and they would look at taking other legal steps.