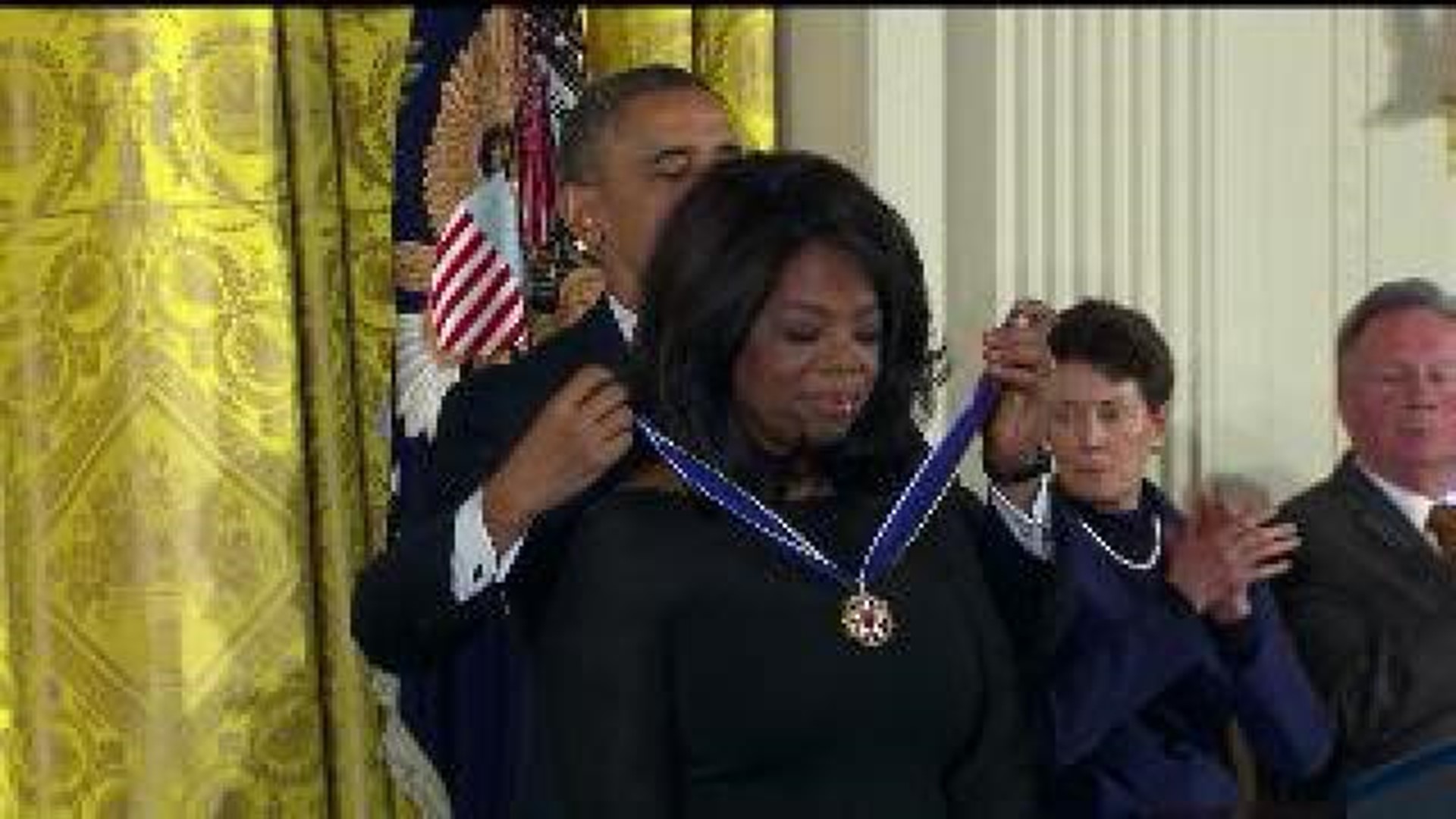 "This is one of my favorite events every year," said the President. "This year it's just a little more special, because this marks the 50th anniversary of President Kennedy establishing this award."

Obama also took the chance during the ceremony for some self-deprecating humor when referencing one of the honorees. "All of us have moments when we look back and wonder, what the heck was I thinking? I have that quite a bit," Obama said. "Psychologist Daniel Kahneman has made that simple question his life's work."

President Clinton is receiving the award for his public service in the White House and for founding, "the Clinton Foundation to improve global health, strengthen economies, promote health and wellness, and protect the environment," according to the White House.

Obama said that after Clinton left office, "he was just getting started, he doesn't stop."

The President added that "I'm grateful Bill as well for the advice and counsel that you've offered me on and off the golf course. And most importantly for your life-saving work around the world."

As for Winfrey, the White House said, "Winfrey is one of the world's most successful broadcast journalists ... best known for creating The Oprah Winfrey Show, " And that she, "has long been active in philanthropic causes and expanding opportunities for young women."

"Her message was always 'you can.'" Obama said. "Michelle and I count ourselves among her many devoted fans and friends."

CNN reached out to both President Clinton and Winfrey for their thoughts on receiving the award, but there was no immediate response.

In a statement,, Obama said the medal "goes to men and women who have dedicated their own lives to enriching ours."

During a press briefing last month, White House Press Secretary Jay Carney added that the award is, "presented to individuals who have made especially meritorious contributions to the security or national interests of the United States, to world peace, or to cultural or other significant public or private endeavors."

The President will headline a dinner at the American History Museum Wednesday night, that will honor all of this year's recipients and include a jazz performance by Arturo Sandoval - one of this year's honorees.

Other recipients this year include:

-Former Chicago Cubs legend Ernie Banks for being, as the White House puts it, "one of the greatest baseball players of all time. During his 19 seasons with the Chicago Cubs, he played in 11 All-Star Games, hit over 500 home runs, and became the first National League player to win Most Valuable Player honors in back-to-back years." In August, the Cubs paid tribute to Banks for receiving the Presidential Medal with a pre-game tribute at Wrigley Field in Chicago. Banks told fans, "You made it possible for me to receive this great honor." The 82-year-old added, "I didn't play in the World Series ... but this to me takes the place of all the days I've spent out here that didn't make it."

-Ben Bradlee, former executive editor at the Washington Post, who oversaw coverage of the Watergate break-in.

-Former Sen. Daniel Inouye of Hawaii, who died last year, honored posthumously for his lifelong public service. He was the first Japanese American to serve in Congress, and represented Hawaii from the day the island state joined the Union.

-Country music star Loretta Lynn, for, "breaking barriers in an industry long dominated by men," according to the White House. She became one of the first successful female country artists in the 1960s.

-Women's rights activist Gloria Steinem, for her leadership "in the women's liberation movement," the White House said, and as co-founder of Ms. Magazine.

"This year's honorees have been blessed with extraordinary talent, but what sets them apart is their gift for sharing that talent with the world," Obama said, adding, "It will be my honor to present them with a token of our nation's gratitude."

The President is expected to mention JFK's legacy during his remarks Wednesday evening, coinciding with the 50th anniversary Friday of Kennedy's assassination in Dallas.

Another source familiar with the planning it was President Obama's idea to honor President Clinton with the Medal of Freedom and to invite the Clintons to the wreath laying at JFK's gave site at Arlington National Cemetery.