Student participation in the Iowa FFA Association is at an all time high and Maquoketa High School is a good example of that with membership up from 60 students... 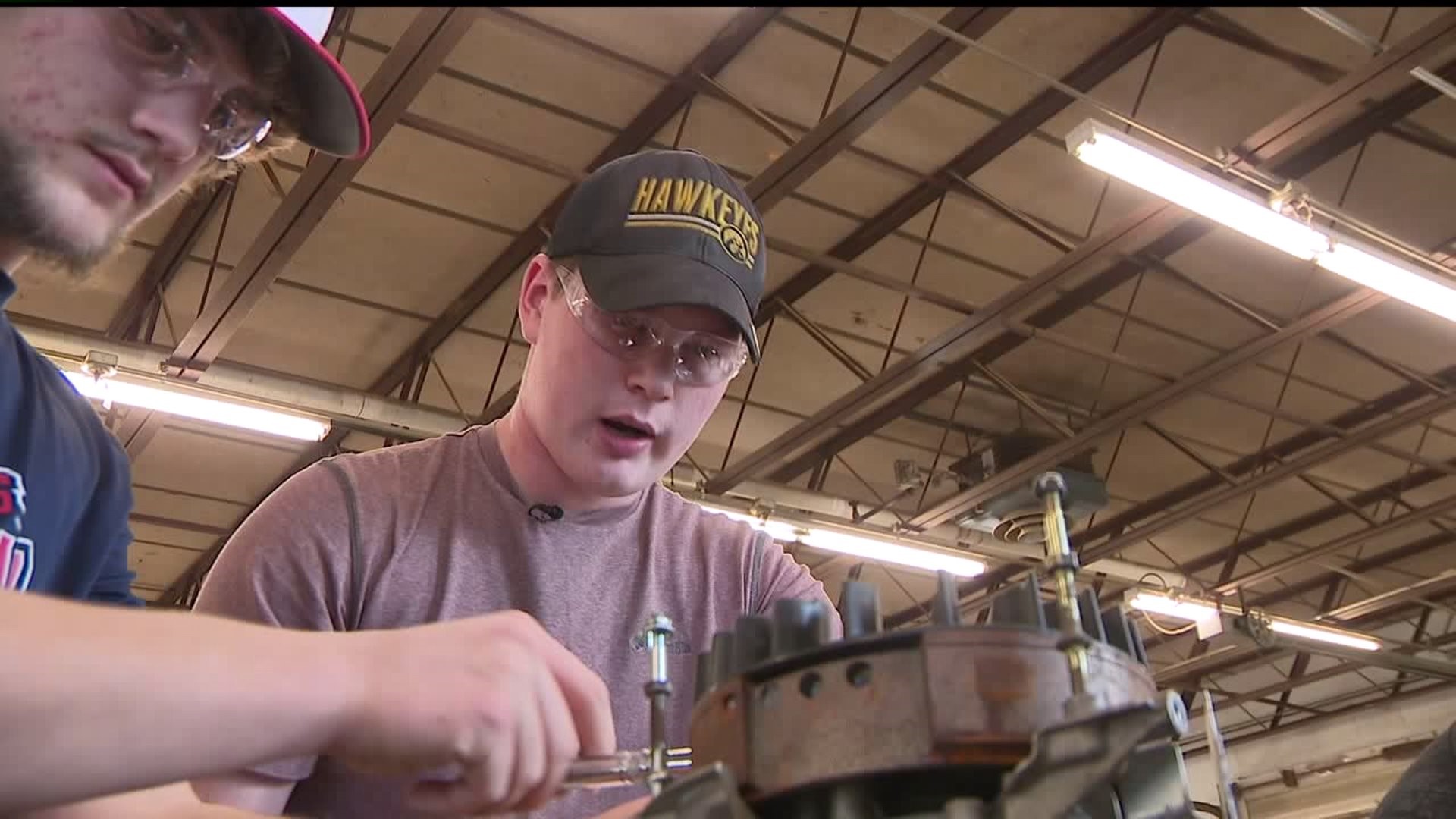 MAQUOKETA, Iowa — Student participation in the Iowa FFA Association is at an all time high and Maquoketa High School reflects that with membership more than tripling in the last year.

"With world population projections of over $9 billion by 2050, demand for food, fiber, and energy will continue to grow and thus, so will opportunities in agriculture. There is high demand for students to enter the work force that have a combination of technical knowledge learned through STEM-based Ag Education and leadership development learned through FFA involvement," said Scott Johnson, Executive Director of the Iowa FFA Association.

"It is common to add 1,200 - 1,500 members during the spring semester. Thus we are on pace to tie or surpass last year's record membership," said Johnson.

During the 2017-2018 school year, Maquoketa High School had 60 students in FFA. Currently, there are 203 students in FFA, according to data from the Iowa FFA Association.

Maquoketa High School is the oldest active FFA chapter in Iowa, chartered in 1928.  Agriculture Education teacher, Matt Lansing says there are two main reasons for the increase in membership.

"We went affiliation dues, which covers everyone," said Lansing, who is in his 2nd year at Maquoketa High School.

Lansing says the number one thing he heard last year was that students could not afford the $25 membership fee. Now the FFA Chapter covers a lump sum, $3,000 affiliation due.

"That’s one. Number two. We also have kind of encompassed Industrial Tech because it’s so hard to find industrial tech teachers," said Lansing.

Lansing says Maquoketa High School was calling for the position since October, 2017. In May, 2018 the call switched to a second Agriculture Education teacher to fill the teaching job that still allowed students hands on learning opportunities.

After no more than five minutes of students taking their seats in his classroom, Lansing ensures all his students have safety glasses and instructs them to head to the shop, where his 'small engines' agriculture class will work for the remainder of the period.

In the shop, students grab their tools and crank away on engines comparable to the size you might see on a push lawn-mower. Not necessarily what one might picture when they think of an agriculture class.

"Very much so I would disagree a little bit," said Lansing, "If I'm on the farm or an ag industry, like if I work at the local co-op, I have to be able to use my hands and be mechanically inclined to repair things," said Lansing.

He says the class teaches students confidence and problem solving. Students might not be able to mess up on an engine at home, but in Lansing's 'small engine' class, it's all part of the learning process.

"It's more interactive, hands-on learning and a lot less paperwork," said Brendon Koch, a junior who says he has always taken Ag classes throughout high school and plans to go into diesel mechanics when he graduates.

"Northeast Iowa Community College is where I want to go - they have a really good John Deere program," said Koch.

Even with 203 students in FFA, Lansing says he wants to see more students join the program. His goal is to have half the school involved.

"When I grew up they said run away from agriculture, go do anything else. Now it’s completely the opposite. Get involved in it. There are great paying jobs there are great opportunities there are great career paths. So that’s where my passion comes from I guess," said Lansing.

His classroom is a renovated bus barn. The shop where the students work is the old welding shop.

With the addition of a second Ag teacher, and plans to expand the courses offered within the Ag department, the Maquoketa FFA Chapter wants to raise money to build a brand new Ag learning center.

Its alumni chapter is working to raise money for the new building.

"There’s a lot of people in the community, not just parents that see the benefit to the Ag education program and want to help these kids succeed," said Skott Gent, President of the Maquoketa FFA Alumni Chapter.

He says he expects the new building to cost roughly $1 million - $1.2 million. Of that about $750,000 has been committed by the school and community donors. Construction will not start until the project is fully funded.

"We know that a lot of these kids aren’t destined for a 4-year college career and so if we can have them career ready coming out of high school it’s just going to make them all the more successful," said Gent. "We very much appreciate the community’s support in this project, the school is doing everything they can to support it financially."