“We don’t have a clear picture of where the money has been for the last decade, and that’s a problem,” says Faculty Senate Chair Christo... 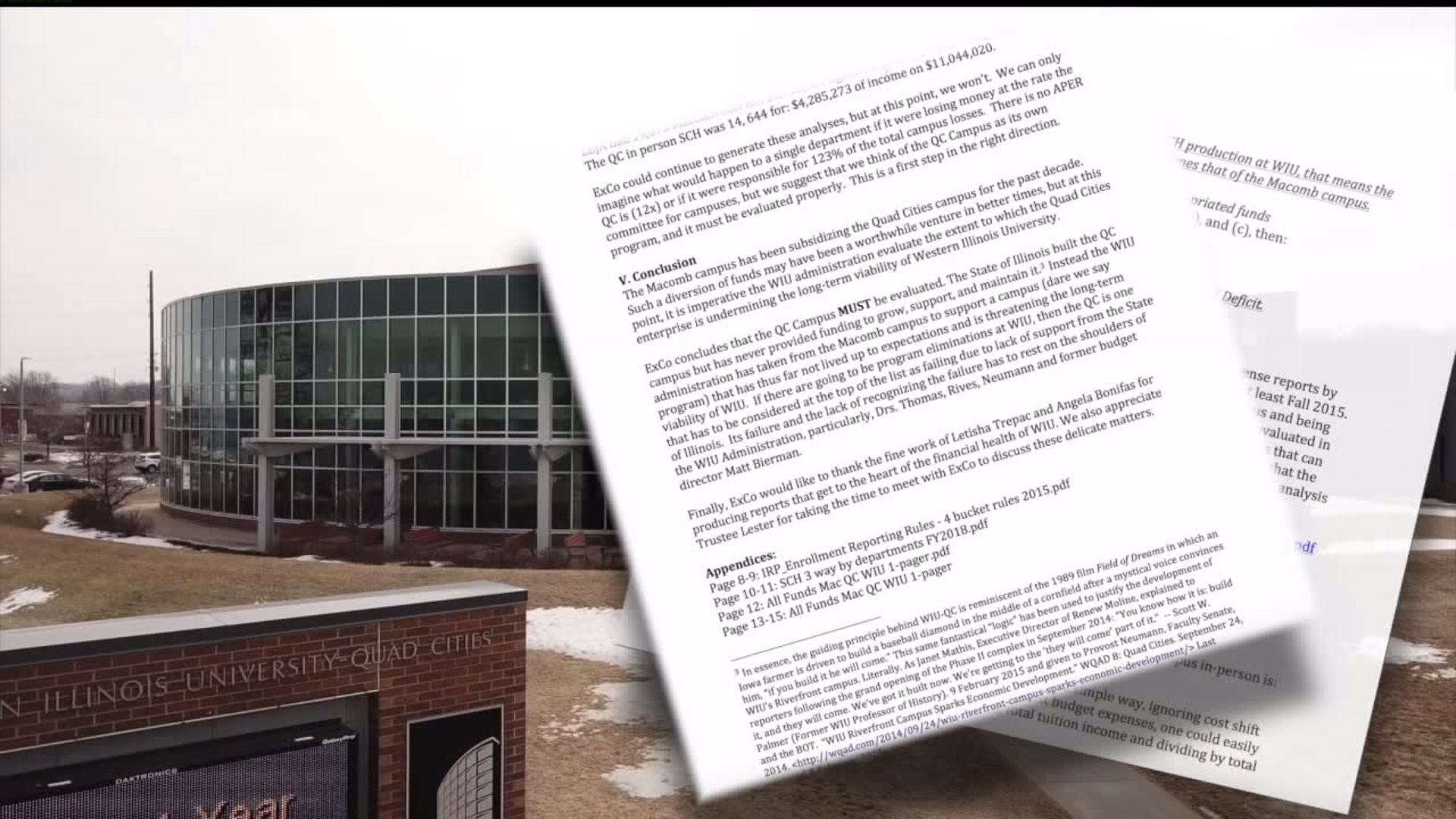 MACOMB, Illinois-- A new report states Western Illinois University's Quad Cities campus is losing so much money, it's draining the Macomb campus bank account too. But some say that report is misleading. It calls into question how Western is spending its money as it asks for more state dollars.

No matter what Western Illinois University campus you're at, students and teachers notice the change.

After program cuts and three layoffs in the past four years, students like Medley worry about the future of their school.

"We don't have a clear picture of where the money has been for the last decade, and that's a problem," says Faculty Senate Chair Christopher Pynes. He works in Macomb.

He says one way to see where money can be saved is by breaking down the finances of the Macomb campus and Quad City campus separately.

"We can't make decisions as a University without clear information," says Pynes.

Pynes recently introduced a report he says does just that.

"If you can't explain where the money is going, it doesn't seem appropriate to be eliminating programs and to be reinvesting in ways when you don't actually know. Then you're just throwing darts at a board," says Pynes.

The WIU Income/Expendature Comparison report analyzes the number of students, tuition dollars, earnings and costs from each campus separately.

"It appears the Quad City campus is losing money at a faster rate than the Macomb campus," says Pynes.

The report says that rate is 12 times that of the Macomb Campus. It shows Macomb has been "subsidizing the Quad City campus for the past decade" and the campus has "not lived up to expectations and is threatening the long term viability of WIU."

It goes on to say if there are going to be more eliminations, "then the QC is one that has to be considered at the top of the list as failing."

Professors at the Quad City campus say people need to be focused on getting more money for the University as a whole no matter where you're at, and that all this report is is a distraction from that bigger problem.

Western Illinois finance professor Padmaja Pillutla, who teaches in the Quad Citues, calls the report incomplete and says it's just a distraction from the financial issues the entire University faces. She says it's time to get creative.

"Creative is not cutting jobs. Creative is not pointing fingers at you verse us, but creative is actually how is us as one University, two campuses lifting ourselves up?" says Pillutla.

"This report was done by three members of the faculty senate. All three from Macomb, and none of them actually are a business professor," says Zbeeb. "They got some numbers from administration. They just throw them in equations and they say these are results, these are conclusions."

"This is really a call to action by the faculty given there are reductions being made," defends Pynes.

It's a call both campuses agree needs to be heard. If they can't solve their money issues on their own, two locations, despite differences in opinion, are now forced to come together as one university to ask lawmakers for help.

"Do you share my belief that WIU, that regional state public universities can transform lives, and if you do, will you partner with us?" asks Quad Cities professor Everett Hamner.

Coming up on Thursday, March 14, 2018, WIU professors will head to Springfield to personally ask lawmakers for $6M to help with their finances.