BUFFALO, Iowa — A non-profit river clean up organization, Living Lands and Waters is hitting the Mississippi in our area harder this year than ever before... 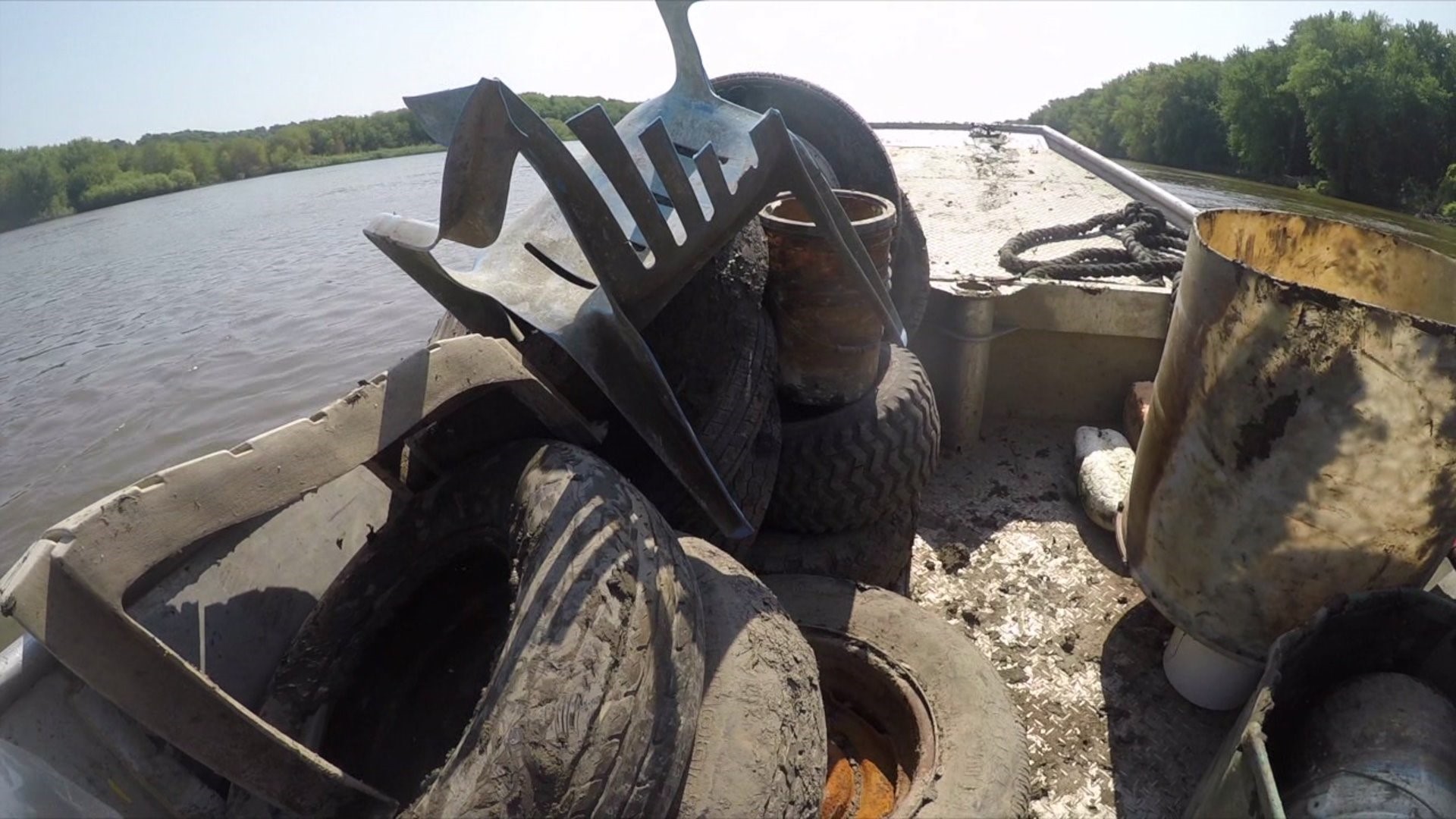 BUFFALO, Iowa -- A non-profit river clean up organization, Living Lands and Waters is hitting the Mississippi in our area harder this year than ever before.

On an average day of collecting, crews with Living Lands and Waters collect more than 2,000 lbs of trash. But this year, because of the flood, they`re finding more in places they usually don't visit as often.

Mike Coyne-Logan, an Educational Facilitator for the operation, said the Mississippi just south of Buffalo near Muscatine is usually not as high this late in the summer. Derek Mitchell, a Safety Manager, said it's that uncertainty of the river that can sometimes keep them on the water longer than usual.

Together, Derek and Mike, along with other crews, set out each morning by boat to search for trash and debris in the Mississippi.

"It’s kind of like a scavenger hunt," Coyne-Logan said. "Sometimes you find some cool stuff!"

That scavenger hunt, leading them to spend nearly nine months of the year cleaning up area rivers.

"For the most part we look for kind of like a log jam," Mitchell said. "So if we see a whole bunch of wood debris, like a log jam, we know there's going to be a lot of trash usually in it."

For them, it is a hidden fortress filled with trash and they will not leave until every piece has been cleared.

"Tires, bottles, lots of plastic. We’re just going to head there today and just pick up what we can, get in the boat, and take it to the landfill," Mitchell said.

The duo said they usually spend most of their time on other rivers, like the Ohio River, because the Mississippi near the Quad Cities is typically clean. But this year, there is more debris than usual in the river.

"A lot of docks will float up and when we find barrels, like 55 gallon barrels, most of the times they’re strapped underneath these docks," said Mitchell. "Water comes up, too much water’s going, takes the dock downriver, and this is where it ends up."

Styrofoam, docks, barrels and more -- all signs of the damage caused by the Flood of 2019. So far this year, Coyne-Logan said they have cleared close to 40,000 lbs of trash from rivers in our area alone. Among the many things:

It's hard work, it's dirty work, but it's work these two men say they will do over and over again until the rivers are clean.

"I love this job. I love each day getting out on the boat and getting dirty, sweating, and doing something good," Mitchell said with a smile. "There’s not much about this job I don’t like!"

"If there’s one thing we can all improve on, is just reducing our use of plastics," Coyne-Logan said. "Litter on the streets eventually can work it’s way (to the Mississippi) over time, and just understand that connection and it’s where we get out water!"

A self-described scavenger hunt through mud and debris, but together they always see a silver lining.

"It's my girlfriend's birthday today so I don't have to get her a birthday present," Mitchell said holding up a muddy vase. "Happy birthday, Taylor. I got you this new vase! She's gonna love it!"

Living Lands and Waters is set to start clean-up efforts on the Mississippi in Burlington at the end of the week. They also have crews working on the Ohio River and both the Illinois and Des Plaines Rivers in Illinois.