Former Illinois Govenor Pat Quinn laced up his walking shoes to accompany his son Patrick on the first few steps of a 190-mile journey across the state to highl... 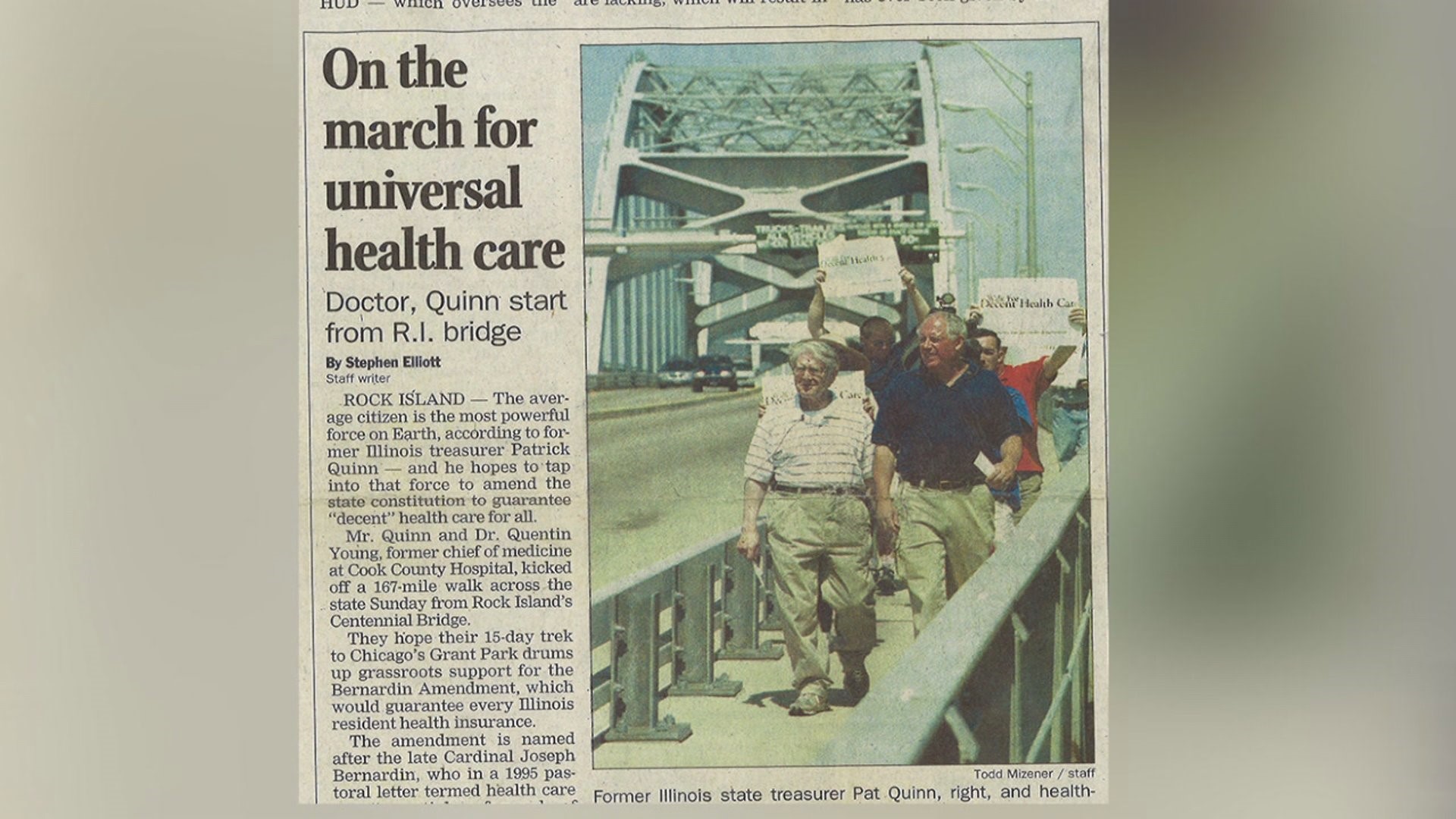 ROCK ISLAND, Illinois -- Rain showers seized as if on cue, just as former Illinois Govenor Pat Quinn laced up his walking shoes to accompany his son Patrick on the first few steps of what would be a 190-mile journey across the state to highlight homelessness.

It was a familiar walk for the elder Quinn.

"These are the very same shoes that I had when I walked across Centennial and started to walk across Illinois," he said.

"It was almost 18 years to this very day," he recounted the march he undertook in 2001, to champion universal healthcare. "With my doctor, Quentin Young, we walked across Illinois  on behalf of decent healthcare for everybody. To see my son Patrick walk across Illinois beginning today, on behalf of people who are experiencing homelessness and to end homelessness, it’s a matter of pride. A family tradition I guess."

Patrick Quinn said he became engaged with the issue of housing and homelessness when he worked at a homeless shelter in Brooklyn, New York.

"When I worked there, I really saw a new face of homelessness, where it wasn’t just this stereotypical panhandler. It was people working 40 hours a week, and I think that kind of activated me to do more."

He estimated the journey to take eight days and about 190 miles on foot: "I'm trying to get 20-25 miles a day in. There is one day where I will probably have to do 40 miles."

Along the way, Patrick, who is currently pursuing his Ph.D. at Rensselaer Polytechnic Institute in New York state, will be stopping at temporary housing shelters. His first stop will be  Christian Care in Rock Island on Monday.

He is hoping to raise awareness of the issue, as well as donations for Housing Forward, an organization working to end homelessness.

"[Homelessness] is more pervasive than people think and it’s in every community and not just in impoverished communities, but in affluent areas as well, in the suburbs," he said.

The U.S. Interagency Council on Homelessness counted more than ten thousand people who experienced homelessness in Illinois in January 2018.

Patrick said he was inspired by his father's "Walk for Decent Healthcare," as well as by those who walked during the civil rights movement.

"I’m an artist. I wanted to have this poetic way of getting people interested in the issue," he said. "I thought this would be a dramatic way to show that a humble act like walking can spur the development of big change."

As his father's son, he also saw the political in the poetic.

"It’s a campaign year and this is a different kind of campaign, walking across the state and kind of activating ordinary citizens."

The governor agreed: "I think in our society we believe in people who are walking, wether it’s for civil rights or health care or ending homelessness."

And big changes start with small steps, he added: "When we started out walking for decent heathcare on this very bridge, we didn’t have the Affordable Care act in Illinois, in our country.  Now we do."