Seems as if he is not afraid of no ghost nor no goats.

A longtime Cubs fan, Murray was in the crowd at Wrigley Field during  Game 1 of the Cubs’ playoff series against the Giants Friday.

And soon after Javier Baez hit the game-winning home run in the 8th inning, Murray was spotted cheering with other fans, wearing a smile, a Cubs jacket -and a hat from Jimmy John’s. It’s unclear if Murray is actually sponsored by the sandwich chain or if he just appreciates a good delivery, like any comedian, reports WGN.

BILL MURRAY LOVES IT! The Cubs lead 1-0 on a Javier Baez blast. pic.twitter.com/Cai0WI3WZ7

One of Murray’s past wardrobe choices also served as a source of inspiration  throughout the tense and (mostly) scoreless game as fans widely shared a photo of him from last season wearing a t-shirt that said “I ain’t afraid of no goats.”

While the photo was initially thought by many (including WGN) to be from Friday night, the image of the “Ghostbusters” star was still the best joke of the night.

It seems the twitter firestorm may have been sparked by a photo posted by @Chicago_History, and carried on through the Cubs victory. 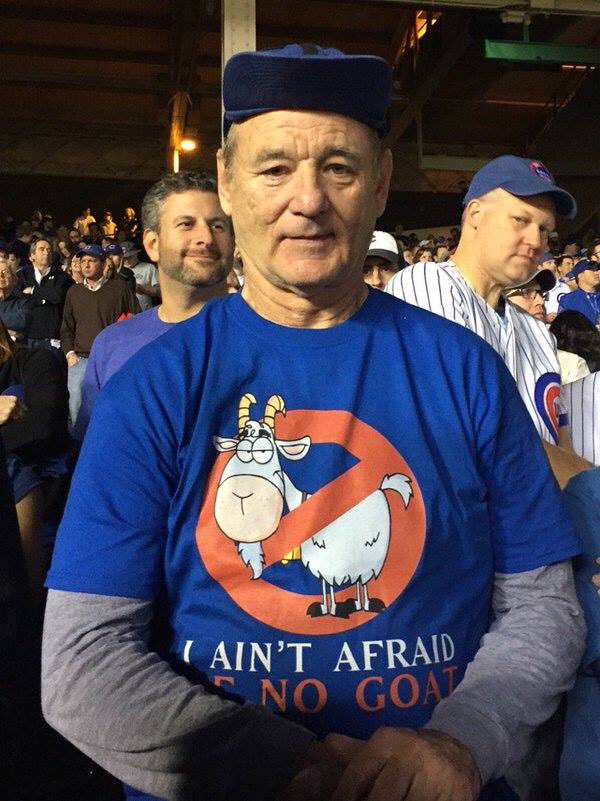 The shirt is a nod to “Ghostbusters,” the 1984 comedy that Murray starred in.

Seems as if he is not afraid of no ghost nor no goats.