There were three workers at Lock and Dam 16 when this happened. One minute they were training on shore, the next they turned into Captain John’s only chan... 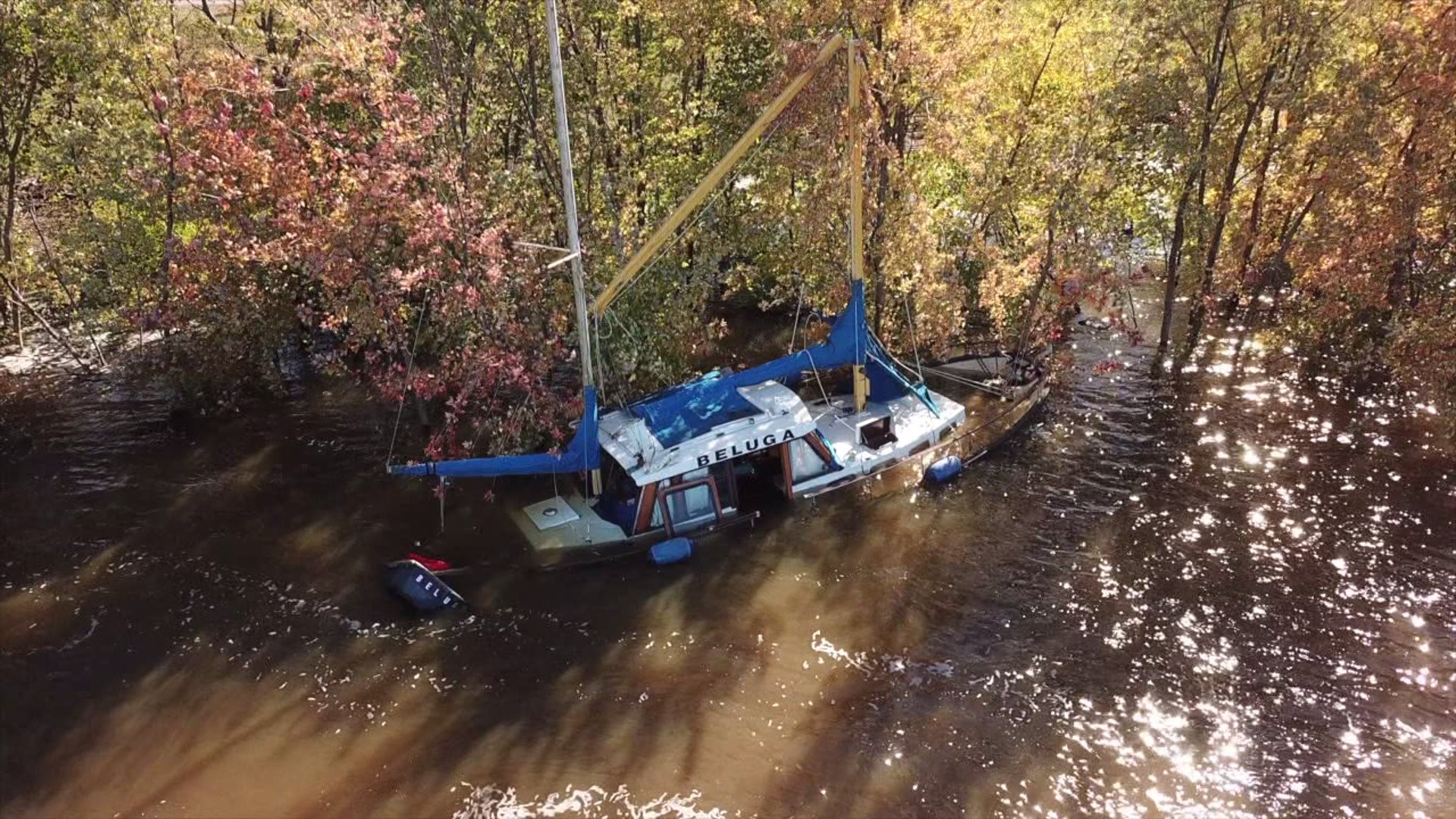 MUSCATINE, Iowa-- It was 78-year-old John Caola's 30th voyage from Minnesota to Florida in his floating home, the "Baluga."

"It's a whale of a boat. It was a 32-foot motor sailor," says Captain John's daughter Debbie Prather. "He's an expert at navigating. But he made a grave, grave navigational error."

This trip down the Mississippi on Monday would be his last.

Debbie talked to her dad just hours before, concerned because of rising Mississippi waters and Lock and Dam 16 in Muscatine just downstream. Captain John decided to anchor and wait out the flood.

"He said he was safely anchored, and I said keep your phone on," says Debbie.

Then disaster struck in the form of rushing waters and a loose anchor.

"When I got to the radio and he said he was in the dam, I looked out at the dam, and I could see his mast pointing up river, so I knew he was sideways," says Army Corps of Engineers Assistant Lock Master Steve Moseley.

Hours after Debbie talked to her dad, his anchor broke free without him knowing.  The raging river flood waters propelled his vessel through roller dam three, lodging his capsized boat into the dam.

There were three workers at Lock and Dam 16 when this happened. One minute they were training on shore, the next they turned into Captain John's only chance of survival.

Steve Moseley was in charge of communication on shore.

"I got to the radio, communicated with the guy and told him we're launching our boat. Be patient. Stay calm," says Moseley.

"We approached the boat, noticed a victim in the cabin laying on his back," says Ellsworth.

And lock operator, Mike Verre was in charge of pulling captain John to safety.

"I looked down into the cabin, and I could tell he was stuck under a bunch of stuff. He was looking back at me with fear in his eyes. I just started moving stuff off of him and was able to get him up next to the door. We got a life jacket on him and took him out the door and put him in our boat," says Verre.

"He's one lucky guy. Yep. Luck was definitely on his side and our side that day," says Moseley.

His boat, the Baluga, is now destroyed and beached. The 30 years of memories inside are sunk. Captain John's daughter is thankful.

"Risking their own lives for bringing my dad to safety. It was an excellent job. They definitely saved dad's life," says Debbie.

It's an incident where the call was too close to ever risk again.

"This is the ultimate wake up call. His voyaging days are basically over," she said.

The Army Corps of Engineers team says a few factors were working in Captain John's favor on Monday. Since the flood waters were high, their life boats were moved from their original holding areas. This made getting one out on the water faster.

Also, they said since John's boat went through the dam, that made rescuing him easier for them because they didn't have to fight the current.

Also, it was just by chance they were all three still on duty. If it would have happened five minutes later, Steve Moseley says he would have been gone for the day.

Debbie has set up a Go Fund Me page to help with re-homing Captain John now that his boat is destroyed.