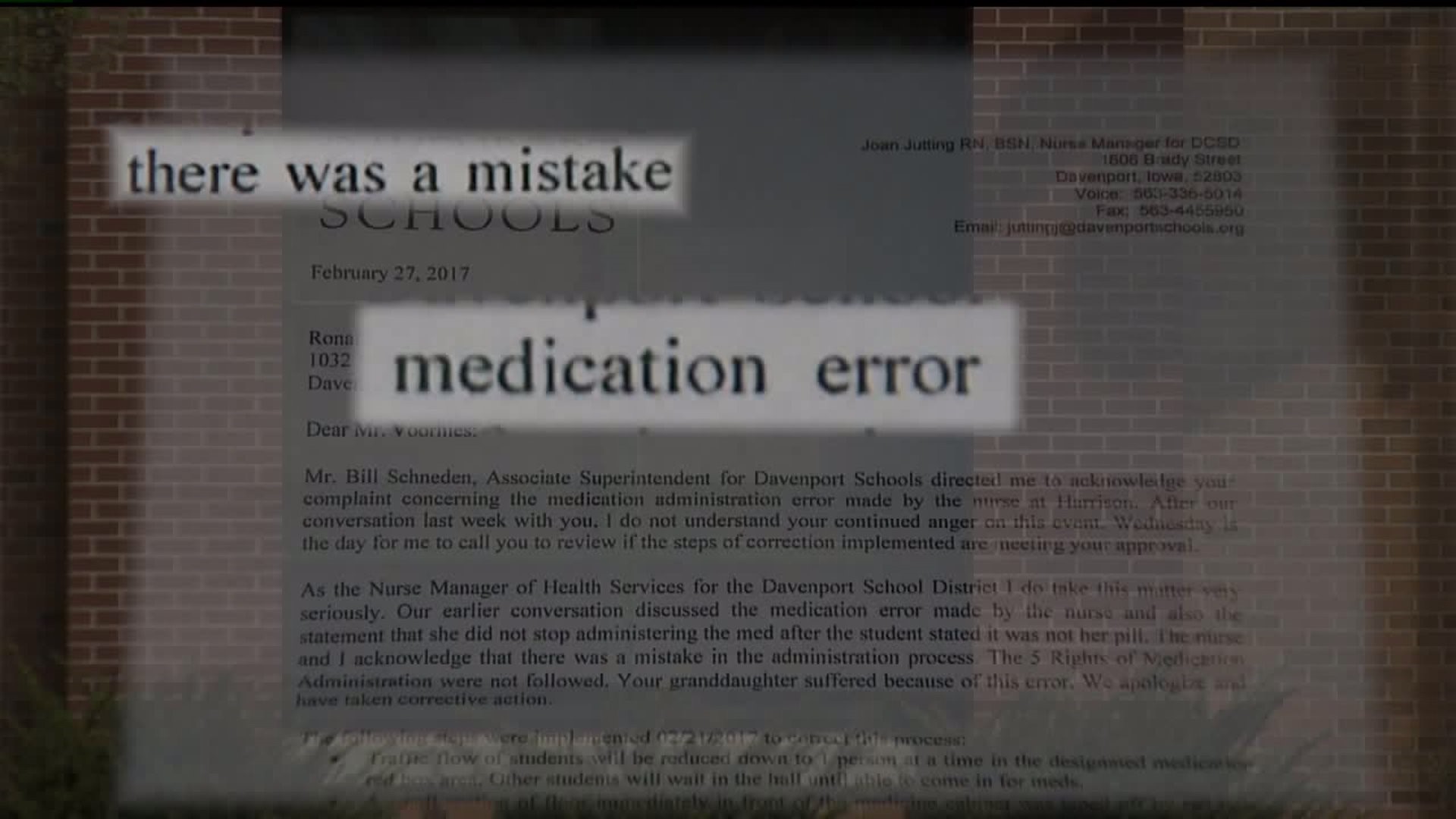 DAVENPORT - A Davenport family says their second grader was given the wrong narcotic by the school nurse after telling her it was a mistake, and is questioning the policies in place for administering medication.

"If Charity got the wrong medicine, how many more is getting the wrong meds and how many parents are wondering why their child is acting differently?," said Ron Voorhies of Davenport.

His granddaughter Charity is in second grade at Harrison Elementary. Born drug addicted to a heroin user, she is on 8 prescribed medicines for a variety of issues.

She takes 7 pills at home, and one half of a pill at school.

On February 21st, she was given another child's medication, in spite of telling the nurse there was a problem.

"It was the wrong pill. She said take it or go the principal's office," said the 8-year old.

"She took it because the nurse threatened her or bullied her or whatever you want to call it, " said Voorhies.

He says afterwards, the little girl's eyes were dilated, her stomach hurt, and she had a bad headache.

"I was worried. The school did admit to it, that they gave her the wrong medication," Voorhies said.

Six days later, he received a letter sent by Joan Jutting, the district's nurse manager, which states there was a "mistake in the process" that day, acknowledging a "medication error" by the school nurse, who "did not stop administering the med after the student stated it was not her pill."

Jutting admits the Five Rights For Medication Administration were not followed, with the promise of better monitoring and a change in policy. Changes would include:

*Traffic flow of students will be reduced down to 1 person at a time in the designated medication red box area. Other students will wait in the hall until able to come in for meds.

*A small section of floor immediately in front of the medicine cabinet was taped off by red tape where the one student is to stand for the medication.

*Computer will be open to students health record that provides name of child, med order and amount of dose, right below the medicine cabinet

"I took them at their word, like an old fashioned handshake. The issue would be fixed, " Voorhies said.

But, he and Charity say, six weeks later, it happened again.

"It was the same nurse, the substitute. It was the wrong pill," Charity said. She said she was again told if she didn't take it, she would be sent to the principal's office. She says  she saw her pill go to another student.

When she arrived home, Voorhies took Charity to the emergency room after she complained about dizziness, headache, and not feeling well. She was sent home from the hospital later that evening.

"The physician was very concerned. It was a stronger dose than what she's use to. It was another narcotic," he said.

The district insists there was no second mistake, and says all pills that day were accounted for. It says proper protocol is being followed at Harrison Elementary.

Voorhies says he believes some action should have been taken against the nurse who would not listen to the little girl.

"She knows her medicine. I would like to see throughout the whole school system an overhaul on how they give their medication and be more accountable for it", Voorhies said.