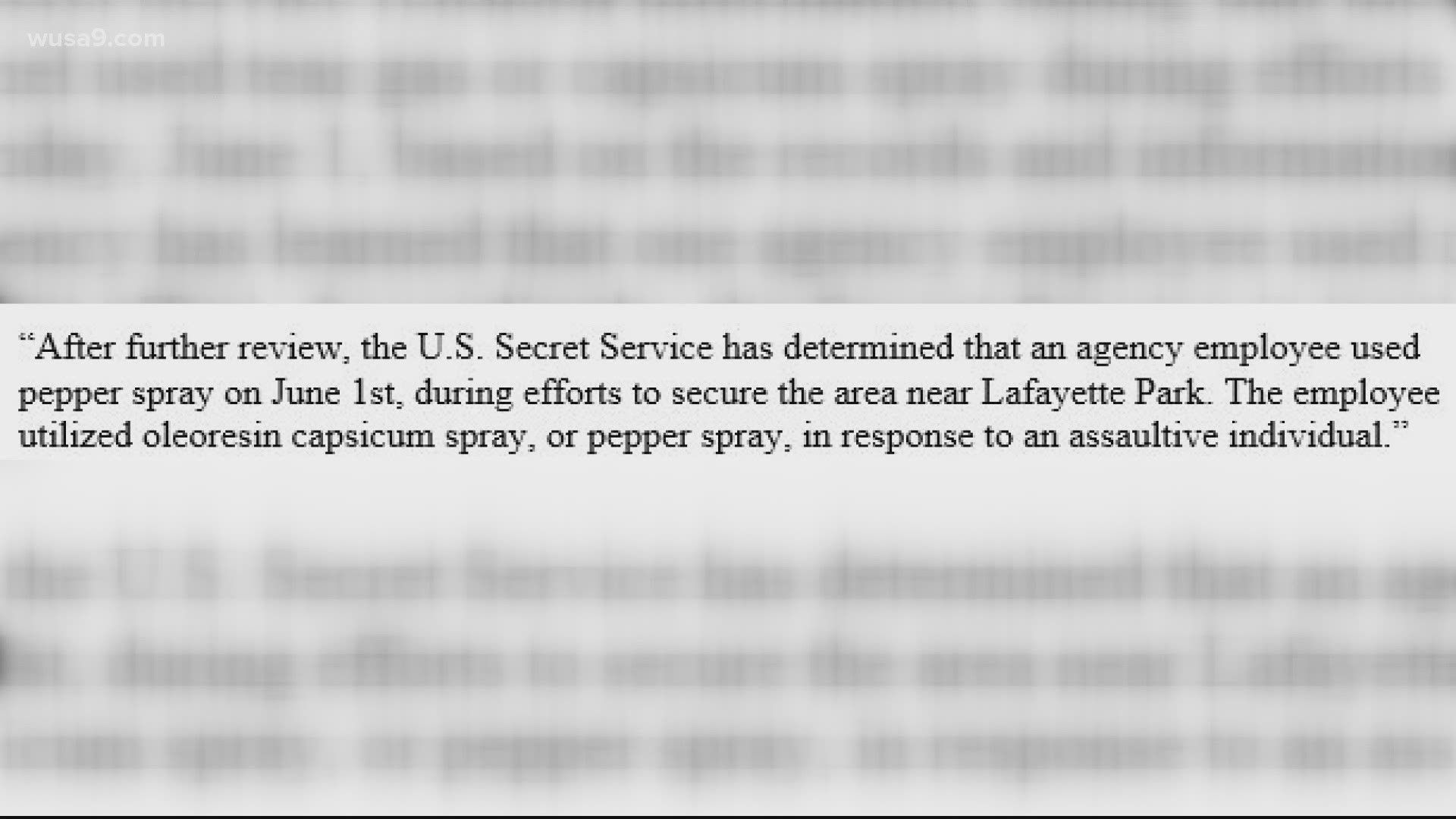 The correction issued by the agency is a follow up to its Friday, June 5, announcement. Secret Service said that none of its agents and officer used capsicum spray or any forms of tear gas against protesters.

The Secret Service was part of multiple federal law enforcement agencies that were in front of Lafayette Square amid days of protests over George Floyd's death.

The events that happened were in advance of President Donald Trump's walk from the White House to St. John's Church, where media took pictures of him. The church's basement was burned Sunday, May 31, while protesters were in the area that evening.

An investigation by WUSA9 showed that gas canisters were found during protests on Monday. One canister was labeled oleoresins capsicum (OC) and the other labeled chlorobenzylidene malonitrile (CS). A Stinger Ball collected by WUSA9 shows an OC gas label, also.

Brian Castner, a former military explosives disposal expert, analyzed the canisters and casings obtained by a WUSA9 crew Monday night from H & 17th streets. He said in addition to the tear gas canisters he previously identified, an additional form of munitions was used against protesters,

"The Stinger Ball Grenades, also mostly made by Defense Tech, are like a -three-for-one," Castner said. "Not only does it have a flashbang effect, but it also has a little bit of tear gas inside of it. Some also have some pepper spray, depending on — there’s a couple models."

A video first reported by The Washington Post reveals federal Bureau of Prison officers, identified by their insignia, were holding the launchers required to fire the tear gas canisters WUSA9 gathered on the streets.

A paper in the British Medical Journal about riot control talks about different gas canisters.

Both natural OC and Tear Gas, which is an artificial compound that goes by the acronyms CS and CN gas, cause the same symptoms and have similar toxicity and health risks, according to the doctors writing that study.

The study shares that significant clinical effects are not anticipated when people come in contact with OC, CS or CN gas.

Other agencies, such as U.S. Park Police, have still held that they did not fire tear gas into protesters.

The gas WUSA9 found is one of a few variations. All three cause similar effects, but some can be more powerful than others and may use additional chemicals that were not in the canisters fired on June 1.

RELATED: No law enforcement agency admits to using tear gas Monday, but tear gas canisters were found at the scene