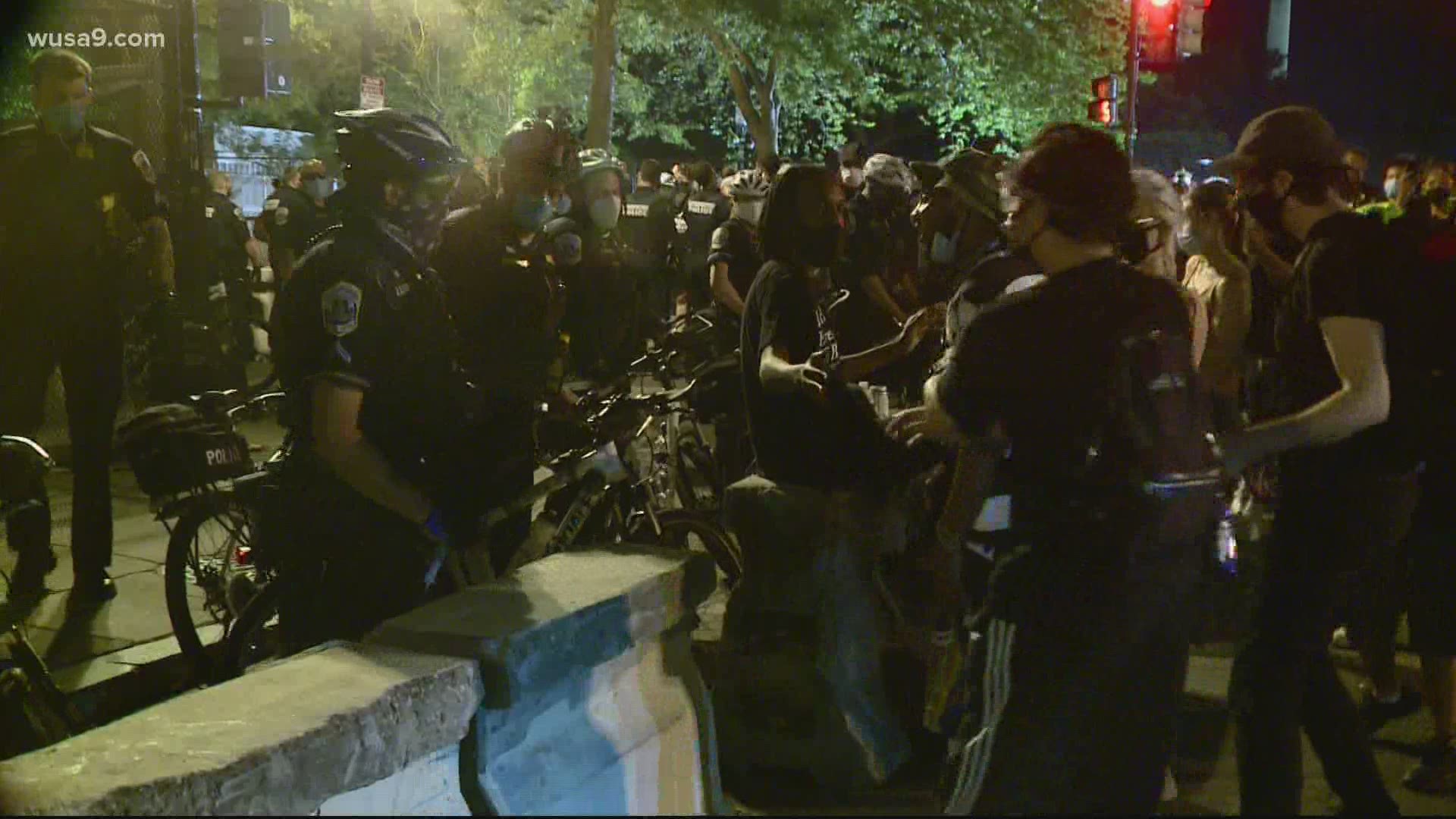 WASHINGTON — Protesters were in Downtown D.C. at Black Lives Matter Plaza early Thursday morning, near St. John's Church after a clash with police. D.C. police were seen guarding the area in front of the church.

The activation comes after protests continued into Wednesday morning. D.C. Police pushed demonstrators back from the area of Black Lives Matter Plaza Tuesday morning, allowing the Department of Public Works crews to tear down encampments that had been there for weeks.

Tuesday night, a group marched from the Plaza to block the I-395 tunnel around 10 p.m., and shortly before midnight, an American flag was seen burning on the ground.

Fencing was also put back up around Lafayette Square after being taken down by U.S. Park Police two weeks ago.

"Lafayette Park will be closed while NPS assesses damage and begins to make repairs to statues and other park resources. The USSS can best speak to questions on White House security," said the National Park Service in a statement to WUSA9.

The clearing of Black Lives Matter Plaza began Monday when Deputy Mayor Wayne Turnage said the reopening of H Street was scheduled to begin. That clearance ended in a clash of protesters and police, and an attempt by protesters to remove the Andrew Jackson statue in Lafayette Square. Two people were arrested, four officers were injured, and numerous protesters were hurt due to pepper spray, pepper bullets and shoving with riot shields and batons in removing protesters from the area of the statue.

Police on Tuesday morning demanded that demonstrators evacuate and remove their tents and belongings from the area. Cars that had been tagged with spray paint were also towed out of this area by police and city workers. 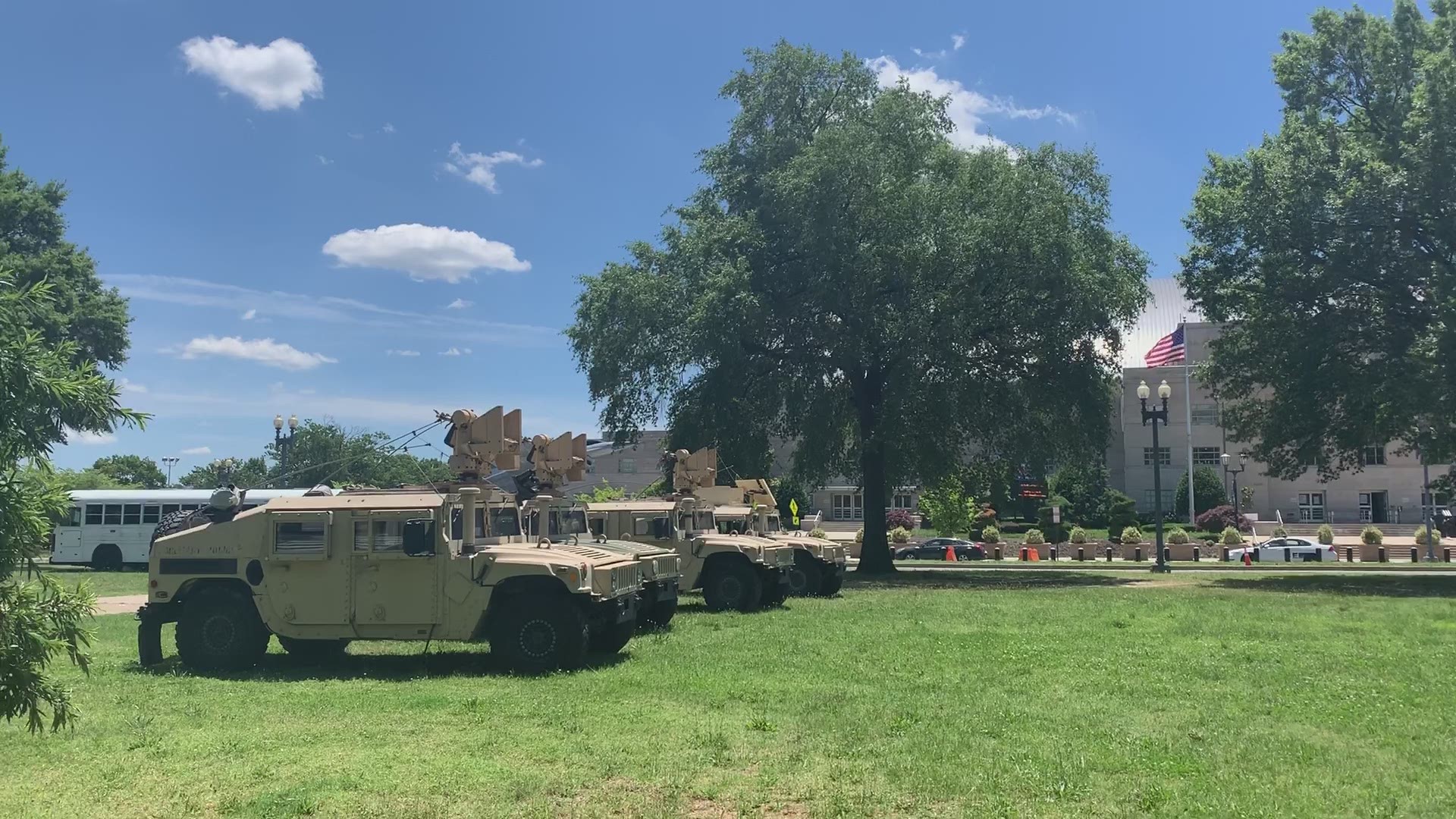 Some protesters said they didn't have the opportunity to grab their belongings and weren't given any notice when police began to form a line to remove the group from H Street.

Chanting "Move back," police officers in riot gear and armed with batons advanced on protesters just before 10:30 a.m., pushing their perimeter to 16th and I streets.

Deputy Mayor Turnage released the following statement about the clearance on Tuesday: “We are always concerned when we have people staying in tents outside – it is not safe. It is also a serious concern if they are staying in tents in the middle of the road. Therefore, today, we deployed our interagency team to talk with the people staying on H Street and, eventually, to remove the tents.”

Protester Michael Jones said he stayed in the encampment in the autonomous zone for three weeks. He told WUSA9 that police pushed protesters out with batons and it was not peaceful. He said officers took tents down and threw them in the trash.

"This is a good example of who the animals really are," said Jones. "They may have the streets, but they don't have our voice."

WUSA9 observed officers shoving some protesters with their batons to move them with the line, but no striking motions and no firing of any ordinance or pepper spray. One person who had previously stuck his hand in front of WUSA9 cameras and threatened WUSA9 reporters was taken behind the line and arrested while the line of police officers advanced north on 16th Street.

Lee Calpin, a resident giving medical aid to protesters, told WUSA9 that officers threw away hundreds of dollars of donated supplies from her aid station tent. She said she is now left unable to help people who were in the autonomous zone.

The few protesters that remained in the area of Black Lives Matter Plaza early Tuesday had marked the area as an autonomous zone. 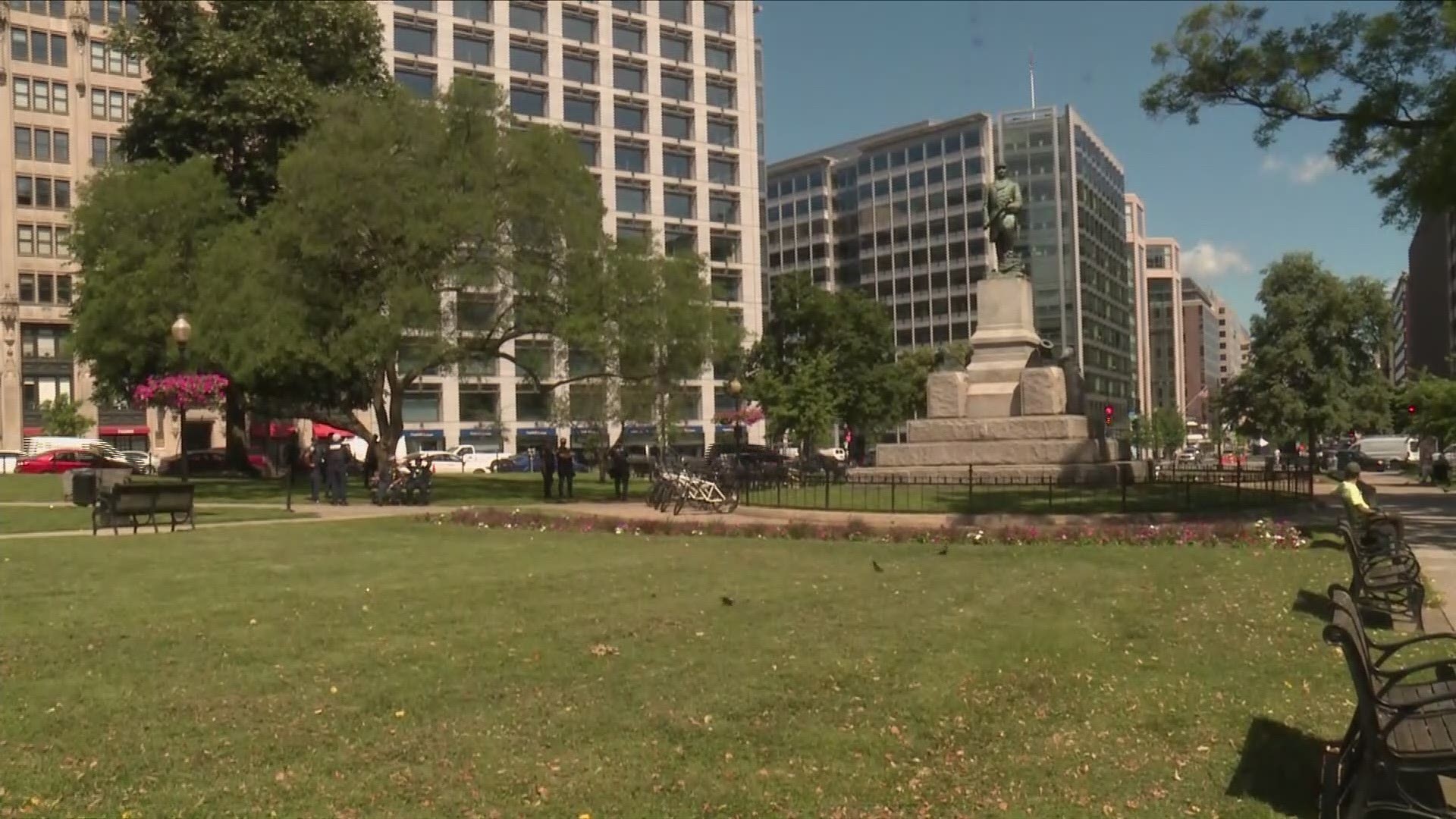 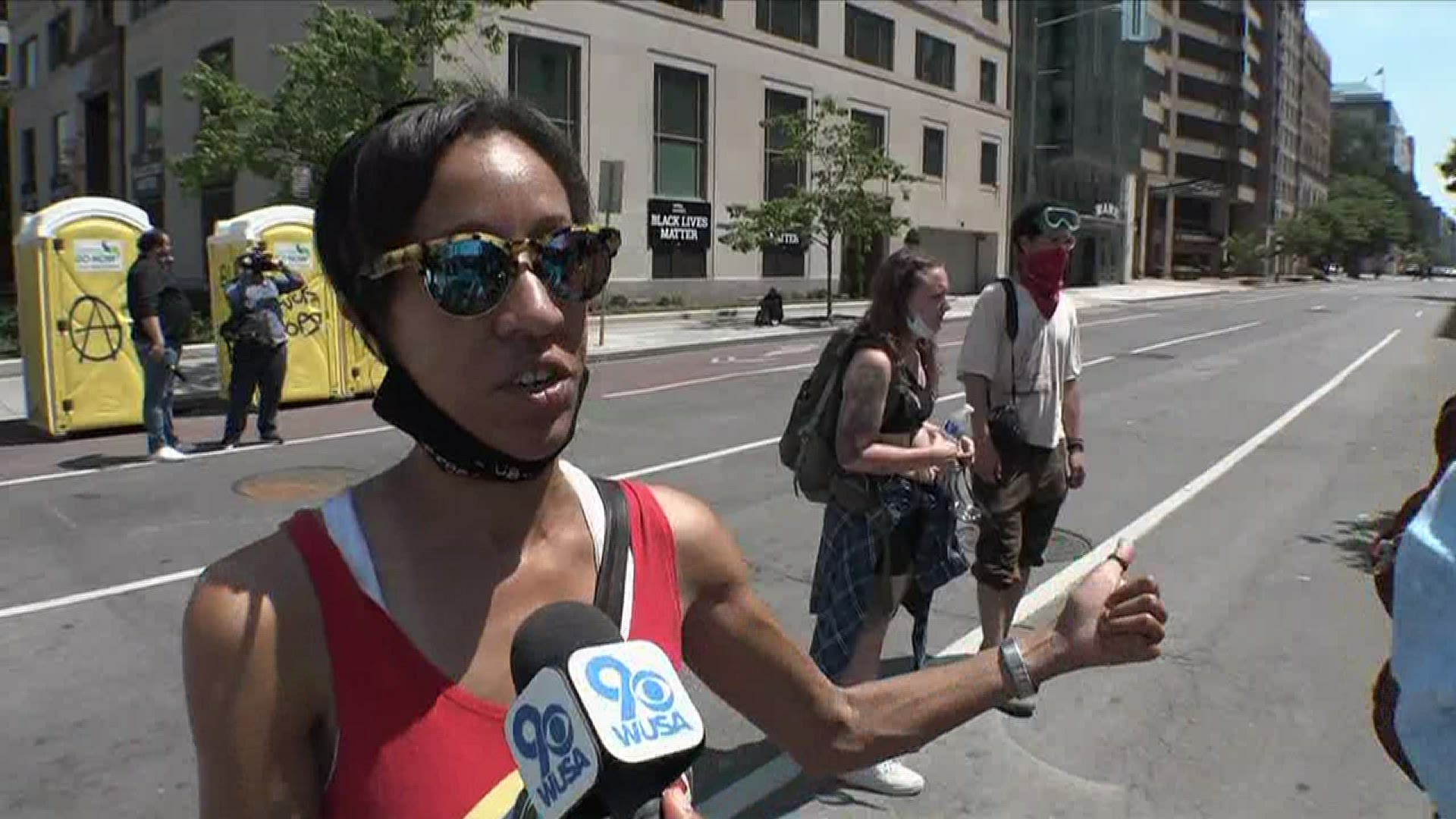 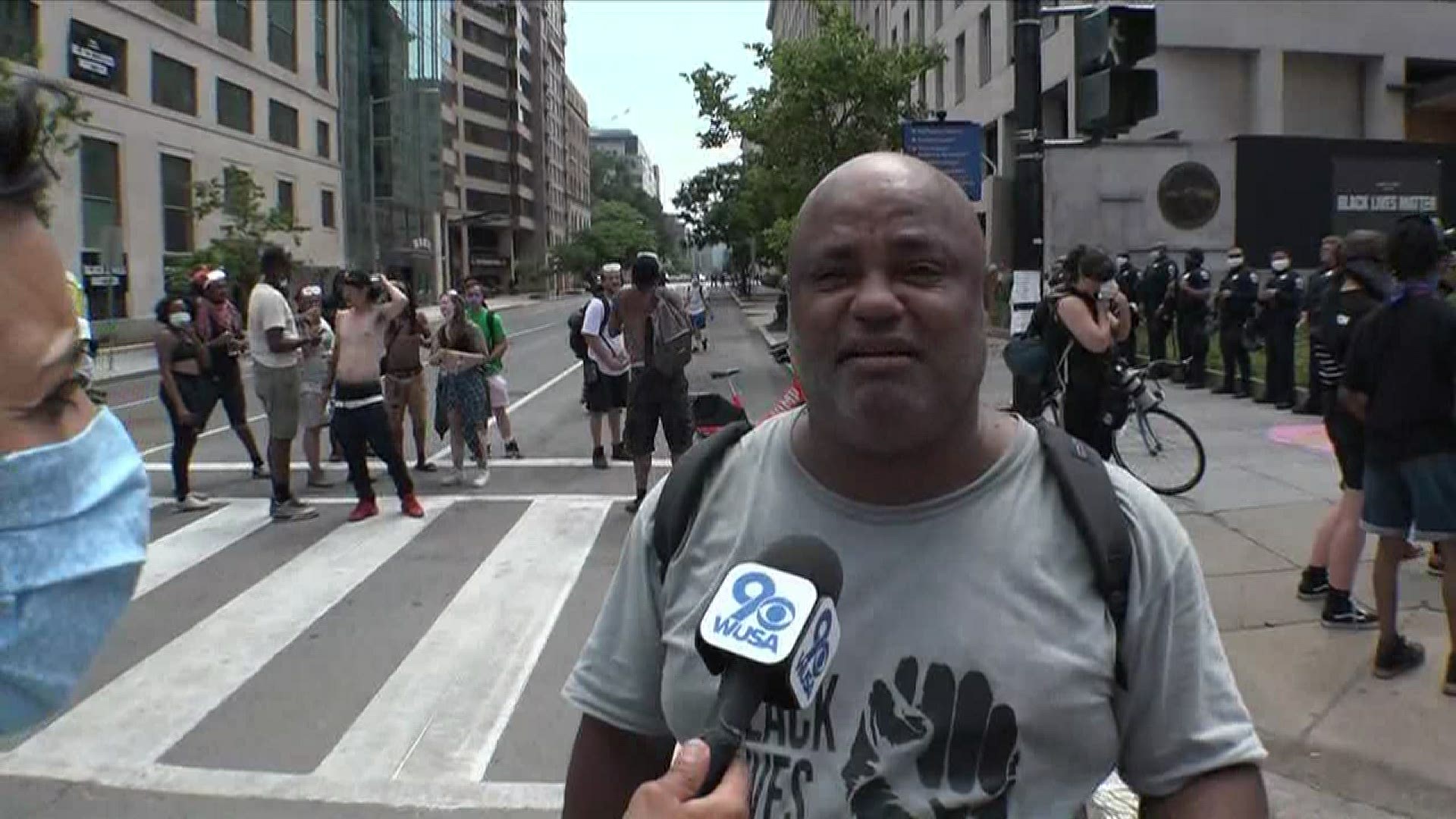 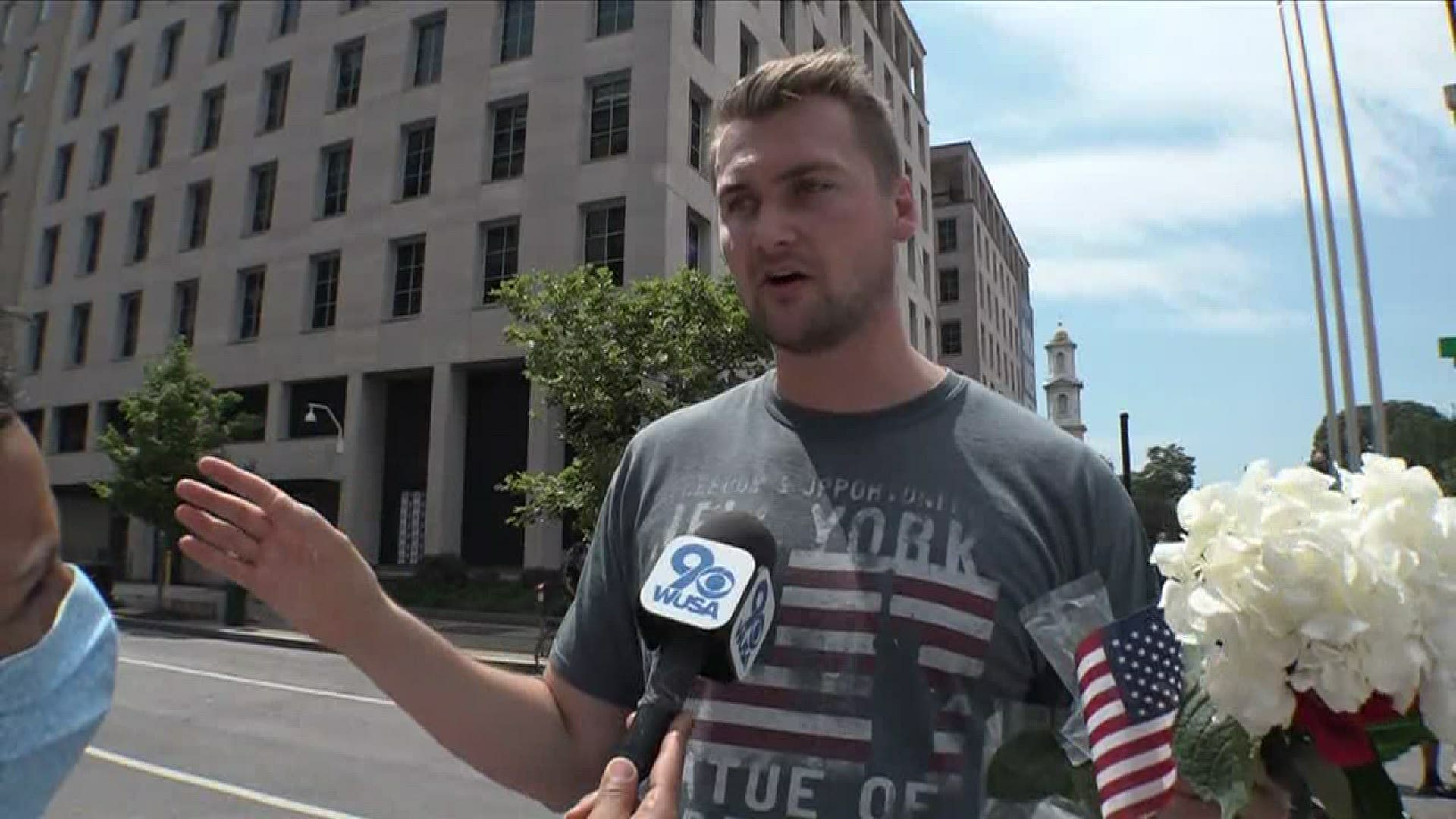 On Monday night, a large crowd of protesters broke into the fence surrounding the Andrew Jackson statue and tried to topple the bronze statue using ropes. Police arrived at the scene shortly after and pushed the crowd out of Lafayette Park to Black Lives Matter Plaza using pepper spray.

Following the intense encounter with police, President Donald Trump tweeted that multiple people were arrested. Trump also tweeted that he has authorized officers to arrest anyone who destroys or vandalizes any monument.

The statue remained unremoved and mounted on its pedestal.

Dozens of demonstrators are expected to march from Lafayette Square Park to the John Wilson Building on Tuesday to confront D.C. Mayor Muriel Bowser. They're expected to address concerns following weeks of protests and recent attempts of removing confederate statues in the city.

RELATED: Who is Andrew Jackson and why did protesters try to take down his statue?