It's been two months since Chad Pregracke unveiled his vision for the current I-80 bridge. But now there's debate over the amount of repairs it would need. 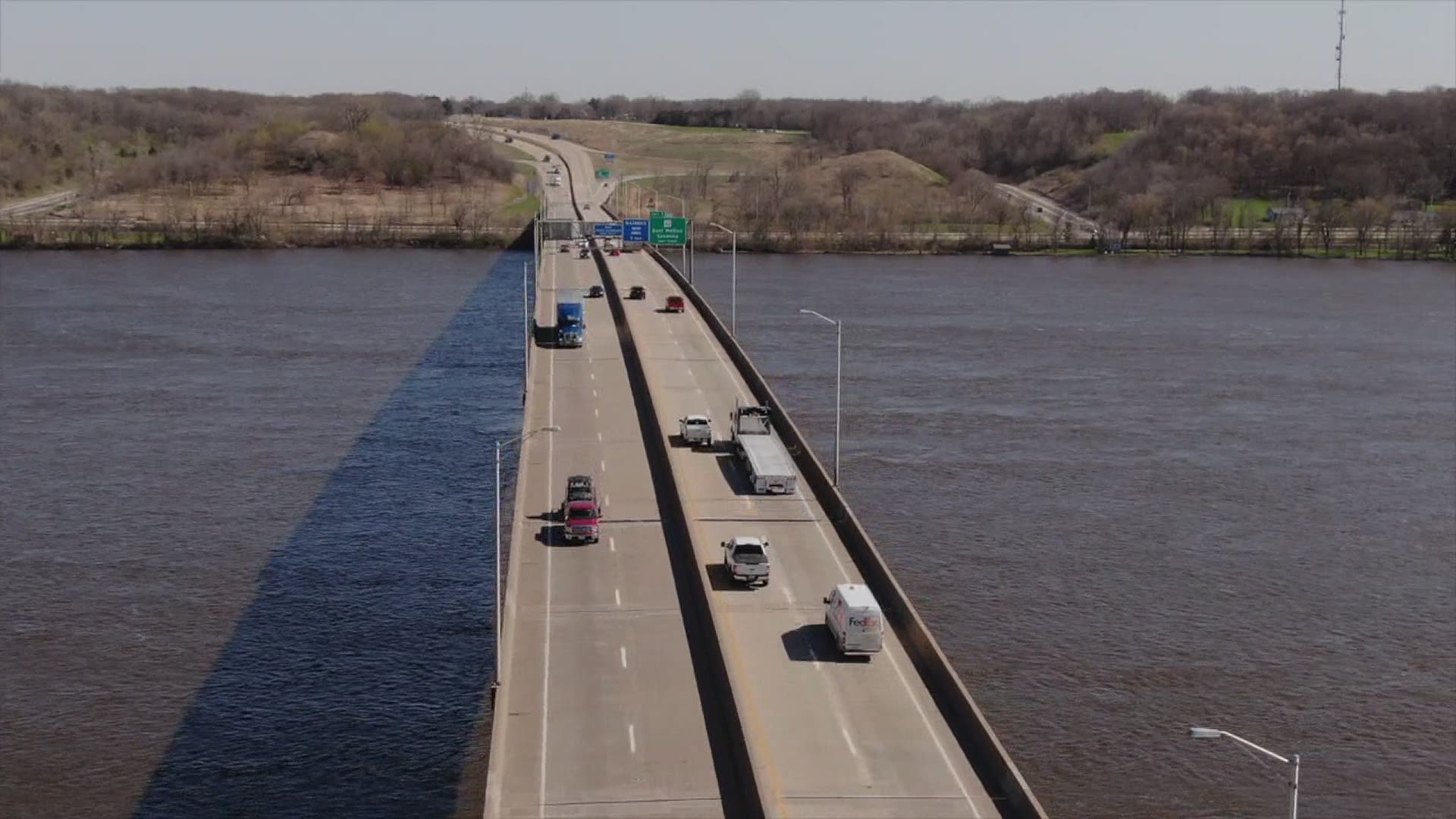 LE CLAIRE, Iowa — It's been two months since local environmentalist Chad Pregracke unveiled his vision to turn the current I-80 bridge between Le Claire, Iowa and Rapids City, Illinois into a wildlife crossing. The project has gained traction across the region - and beyond - as the "Bison Bridge."

Both the Illinois and Iowa Departments of Transportation are looking for a place to build a new interstate bridge across the Mississippi River. They say the current bridge is 55 years old and aging; it's dangerously narrow, with no shoulders for impaired vehicles to pull onto; and with only two lanes on either side, it's too small for the amount of traffic it holds.

It's estimated over 40,000 cars, trucks and semis cross the bridge every single day.

Over the last decade, millions of dollars have been poured into the bridge's upkeep, including construction around 2010, when a routine inspection found parts of the bridge to be structurally flawed.

RELATED: The Quad Cities could get a national park and bison bridge... on I-80

If the DOTs find a new location, Pregracke and his team, the Bison Bridge Foundation, want to transform the structure into a half pedestrian bridge, half bison crossing, with the possibility of national parks on either side of the water.

Pregracke says they'll be responsible for the upkeep of the bridge after its retired as a vehicle corridor and is confident the repairs won't be as pressing without the weight of 40,000 cars a day.

"The bridge is not failing. Bridges last a long time. It's the vibration and salt that hurts bridges, from what the experts have told me," said Pregracke. "It's concrete and steel and if there's not vibration on it, I've been told it will last a very, very long time."

"You look at a vehicle and a semi can weigh 80,000 pounds. That's a lot of weight and there's a high number of trucks that travel across that bridge. All that pounding, that travel across the bridge takes a toll. To reduce that down to almost nothing is huge," said Marchek, a now-retired IL-DOT employee who spent nearly four decades with the department. "That should extend the life of the bridge by quite a bit."

But not everyone agrees. Erik Danielson is a structural engineer for Select Structural Engineering, LLC in Bettendorf. He says while the cyclical loads of traffic will be reduced, much of the wear and tear the bridge faces actually comes from environmental factors, which would still exist no matter who's crossing the I-80.

RELATED: A record-seeking canoe trip raced through the Quad Cities in the dead of the night

"Really, a lot of the maintenance type stuff is environmental - rains, de-icing salts are a huge thing for the concrete on the bridge deck, snows whatnot. That gets down into the deck and wears away and that's why you see issues there," said Danielson. "That's probably the main factor [for] a lot of [damage]."

He also says the amount of soil and structures that are placed on top of the bridge's deck play a huge role in its pressure.

"That definitely have to be investigated to see how much soil and how much plant life would be placed on the deck. That would be more of a permanent load, so again, that would be something to add," explained Danielson.

However, he did stress that with a project like this, it's extremely difficult to paint a picture of what's going on without all of the specifics behind what state the bridge is in right now and what exactly the Foundation wanted to do with it.

He also mentioned all of that just means the bridge will have to be monitored like usual, not that it's unsafe.

News 8 reached out the IL-DOT to inquire about the state of the bridge and its future conditions and received this emailed statement:

"IDOT has not performed any assessment of future structure treatment or viability for an alternative use of the current I-80 bridge. We do perform regular structure evaluations, which is what we do with all bridges that are in our jurisdiction, and we will continue to do so as long as the bridge is in service, and, if needed, we’ll perform maintenance to ensure the bridge is safe and usable for its intended purpose, which is carrying traffic across the Mississippi River."

But all of that isn't deterring the Bison Bridge team, which said they understand maintenance is inevitable when dealing with bridges.

"You can't just ignore it," said Marchek. "You'll still have to go out and do your routine inspections to make sure everything is okay, and you're probably gonna have to make some repairs as time goes on. The big thing here is that this bridge will benefit the community."

RELATED: A new dirt race track to open up in Viola, Illinois

It's a statement that thousands of people can seemingly get behind. When the project launched in March, the team was trying to collect 50,000 online signatures in support of their efforts. They obtained over half of those within the first month.

"It just shows that there's a lot of interest in it and people are excited about it," gushed Pregracke. "The overwhelming response has been amazing. It's truly a grassroots campaign and making this happen one signature at a time."

Marchek says that response has also helped speed things up a little bit on the bureaucratic side.

"I think the support has definitely helped on the legislative side. I think that will help maybe the DOTs to move a little faster," he smiled. "They still haev a process to follow and like it or not, that's not always the fastest project."

He says if you want to support the vision to bring a wildlife crossing to the Quad Cities, the best thing to do is sign the online petition, here.

It's not surprising that wildlife crossings have been popular in Europe since the 1950's - considering the positive...

Posted by Bison Bridge Foundation on Wednesday, May 12, 2021