One Coal Valley family went all out on their holiday decorations this year... and it's all for a great cause. 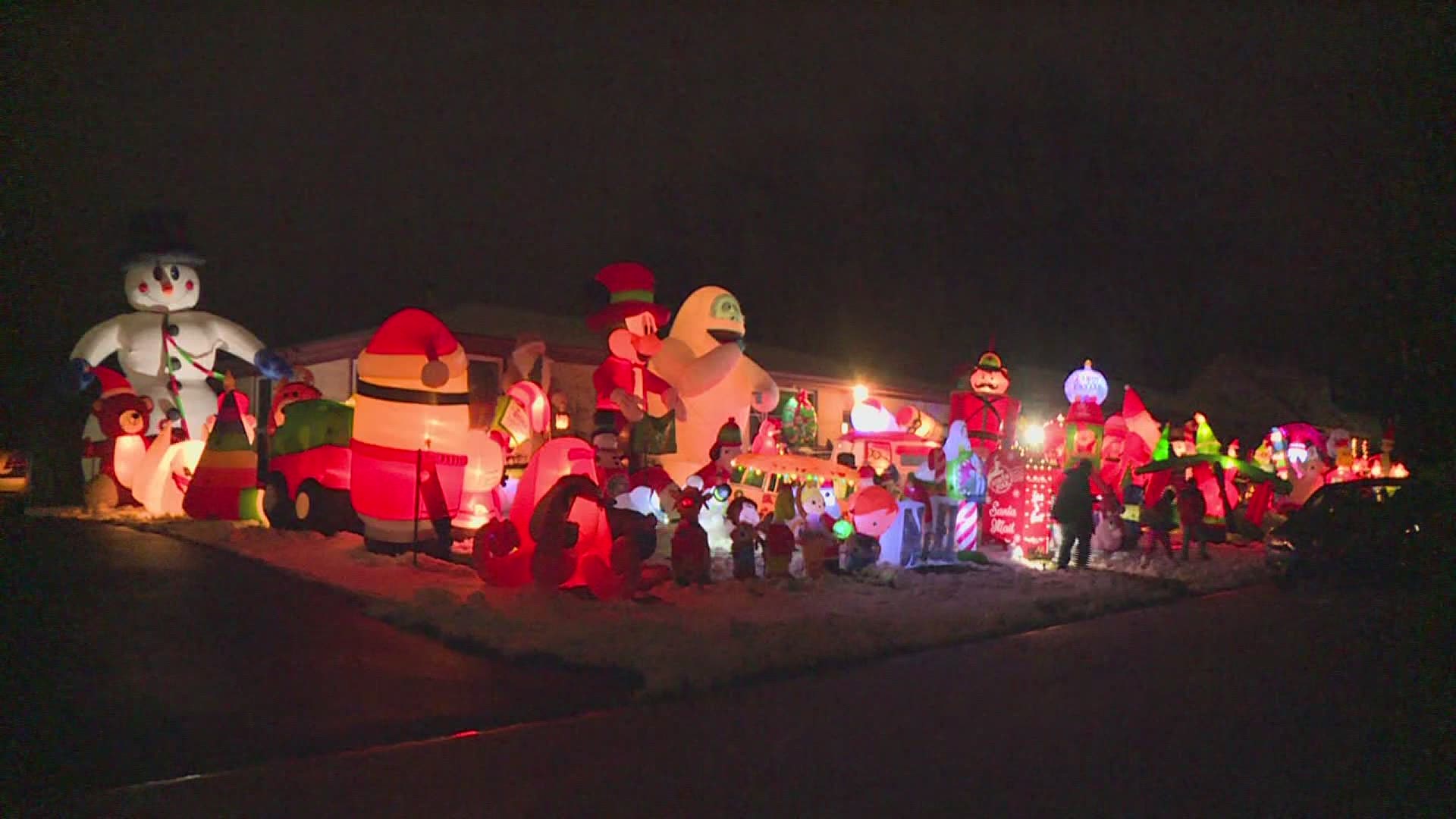 COAL VALLEY, Ill. — Stephaine and Toney Genova are used to going all out on their yard decorations for the Christmas holiday, and this year is no exception.

The Coal Valley couple has been filling the front of their house with all sorts of inflatables - both familiar Christmas faces and some unexpected ones - since 2007, when they had a house fire. As Stephaine explains, it gave their kids something to look forward to.

Since then, they've added dozens of new inflatables every year, until they reached 2020 massive, 130 inflatable display. Several soar into the air, such as the 26-foot-tall snowman, towering over the entire neighborhood.

The entire spectacle and is winter-wonderland-lover's dream: pathways are created between the blow-ups, allowing visitors of all ages to explore the display from within' along the path are several wooden Christmas characters with the faces cut out for pictures; Christmas music tinkles softly in the air; and the front door of their house is painted with a seasonal backdrop for families to take photos in front of.

Credit: Shelby Kluver
The Genova's massive holiday display spans both sides of their front yard, with around 130 inflatables

Just inside the garage, Mr. and Mrs. Clause await to take photos with children, and to give out goodie bags filled with candy, popcorn, and more. A craft table has all that children need to write letters to Santa, color pictures, and create their own ornaments. And a few steps away, a giant dispenser of hot chocolate awaits for all who want a sugary treat.

"Every year we do more and more and every year we get more and more people and this is the most we've had so far," said Toney. And he's not wrong. The Genova's estimate about 100 people came to last year's celebration - way behind this year's 250 visitors. By the end of their two-hour event on Dec. 12, they had given out goodie bags to 90 kids.

"The turnout is a lot larger than it was before, and I think a lot of that is because people have been cooped up all year and they’re looking for something to do," said Stephaine.

RELATED: 'Two Weeks of Love' campaign celebrating 20 years in service as need increases due to pandemic

Throughout the night, visitors came from all over the Quad Cities, including parades of cars, a Davenport trolley, and a special visit from the Christmas Truck - all decked out in lights, with its own inflatable Santa Clause hanging off the back.

"It just really takes you back to what Christmas is actually all about," said Stephaine. "And it lets kids experience the holiday like how we did when we were young."

But there was more to this event than the forest of inflatables, and crowds of holiday-hyped little kids. It was also the second annual 'Kickoff To Christmas' that the Genova's have hosted.

All night long, the couple accepted both monetary and food donations, with all of the proceeds going towards holiday food baskets for area families.

Last year, they were able to raise enough for about five families, with the Hyvee Moline donating either a turkey or a ham to each basket. This year, with that continued help, and after partnering with Coal Valley Days, they hope they can reach at least 10 families.

"Every family gets a pie, either a turkey or a ham, one box of stuffing, vegetables, along with gravy, plus dinner rolls, so they get quite a bit of stuff," explained Stephaine. "It’s been a big hit and we’re real big into the community and helping out those in need, so that’s the reason we’re mostly doing it: for the enjoyment of others."

The family plans on distributing the food baskets sometime the week before Christmas, and until then, they say any and all contributions are welcomed.

"There's quite a bit more need this year than there has been in the past several," pointed out Toney. "Every little bit helps and what doesn’t... we'll just make up the difference."

After their Dec. 12 display, the Genova's had raised over $120 in cash, as well as several bags of canned goods. But they say the more they can gather, the more families they can reach.

If you'd like to donate, either money or food items - particularly canned goods - you can mail items to their house, or drop bags off on their front porch at 1709 East 3rd St. in Coal Valley. You can check out their Facebook page.