Protesters gathered again on Sunday, this time in west Toledo to call for police accountability after the death of George Floyd in Minneapolis last week 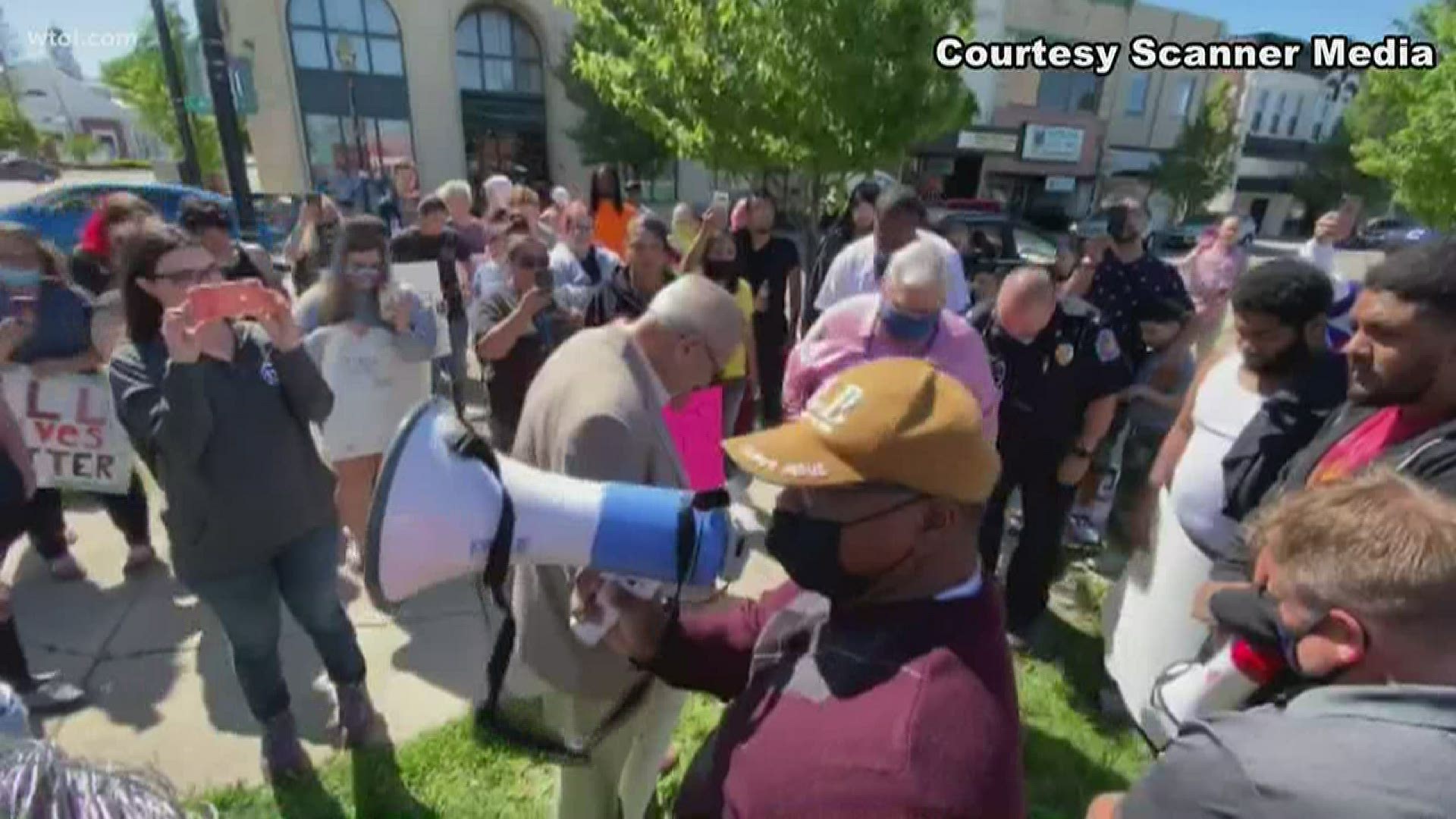 TOLEDO, Ohio — This article will be continually updated with the most recent information we receive and confirm.

Hundreds of people gathered in downtown Toledo on Saturday afternoon for what was hoped would be a peaceful rally to demand justice for George Floyd, who died while in police custody in Minneapolis on Monday.

The event was organized by the Community Solidarity Response Network of Toledo and was billed as a 'Police Accountability March'.

The protests continued into the evening as protesters moved to various parts of the downtown area and eventually throughout the city where Toledo Police tried to maintain order.

On Sunday, demonstrators gathered on Monroe St. for another rally. Other rallies were planned in cities around northwest Ohio as well.

Here is a look at the events of Saturday and Sunday, featuring photos, Tweets and Facebook posts from WTOL 11 reporters and photographers.

A large group of demonstrators who were protesting in front of Franklin Park Mall earlier on Sunday began walking southeast down Monroe St. before moving onto Secor Road heading south.

Later the group began heading north again via Indian Road in Ottawa Hills back toward the Franklin Park Mall.

Protesters did take up part of the roadway, but police were present and we're told things remain peaceful.

Toledo protesters on the move

Toledo protesters marched down Monroe Street on to Secor Road and Indian Road during a peaceful demonstration Sunday that blocked the roads and halted traffic.

Hundreds gathered in Bowling Green tonight for a March against police brutality.

The demonstrators started at the Wood County courthouse before marching to the downtown green space. Several speakers talked about their own experiences with police and the need for change

There was a small number of counter-protesters but things remained peaceful as Bowling Green Police and the Wood County Sheriffs Department looked on.

A group of demonstrators gathered in downtown Fostoria on Sunday, holding signs and chanting.

Organizers implored the people who gathered to keep the protest peaceful before saying a prayer.

Protesters are gathering in front of the Franklin Park Mall in west Toledo on Sunday afternoon.

At least 60 people were lined up on Monroe Street in front of the Burlington Coat Factory as of 3:50 p.m.

Many held signs calling for police accountability after the death of George Floyd while in police custody last Monday.

It’s unclear if the protest is related to the mall closing down for the day. 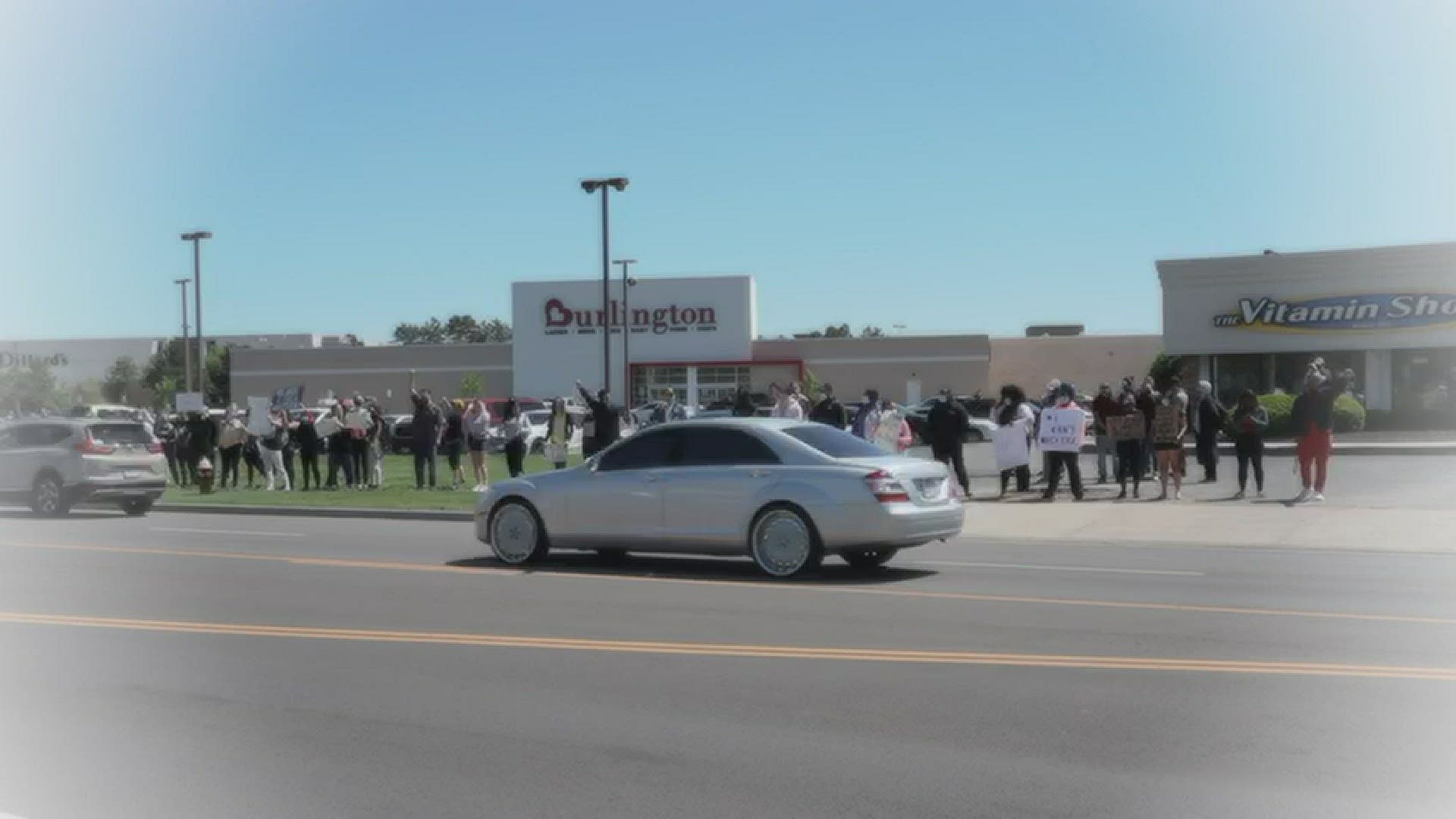 Franklin Park Mall closed for the day but did not offer an explanation.

The mall also barricaded all of the entrances to the parking lots.

The closure comes as organizers planned another protest on Monroe St.

Toledo Mayor Wade Kapszukiwicz speaks to the media about the protests that took place in the city on Saturday.

He began by acknowledging the anger and frustration in the African-American community that has come to a head after George Floyd died in police custody in Minneapolis on Monday.

He says he supports the protests that happened in Toledo and the right to protest.

At the same time the Mayor says he does not support the violence that eventually sprang from the earlier peaceful protests.

The mayor confirmed that there have been 10 arrests during the protests as well as 3 non-serious injuries, all caused by projectiles thrown by protesters.

RELATED: Nine men, one woman arrested on Saturday during aftermath of afternoon demonstrations

The mayor says he expects more arrests through the evening and he is aware of and concerned about reports of violence by police.

Police and fire crews were sent to the Target store on W. Alexis Ave. on reports of looting and a fire alarm. 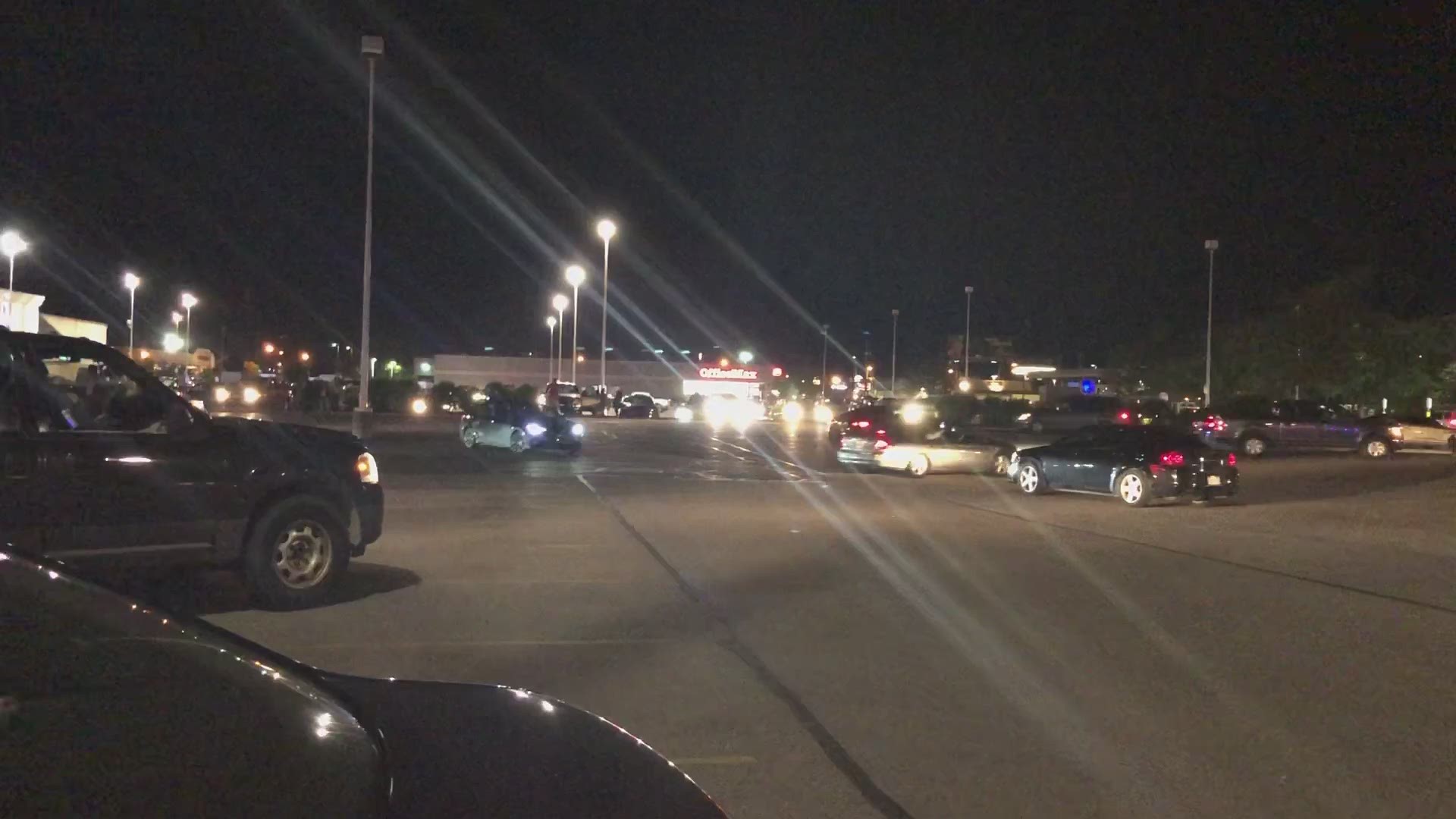 Police have blocked off all entrances to the Franklin Park Mall after reports of vandalism.

Toledo police announced that at least two people were taken to the hospital after being injured in the protest, one by an M-80 that was thrown in the crowd and another with an unknown injury.

An Ohio State Highway Patrol Officer was also struck by a rock according to police.

TPD says numerous buildings have been damaged including the county courthouse, The Huntington Center, Banks and the Ohio Building.

The owners of Balance Grille in downtown Toledo shared a video with WTOL 11 that appears to show a man dressed in camo walking by the popular eatery and throwing a rock at one of the restaurant's windows. 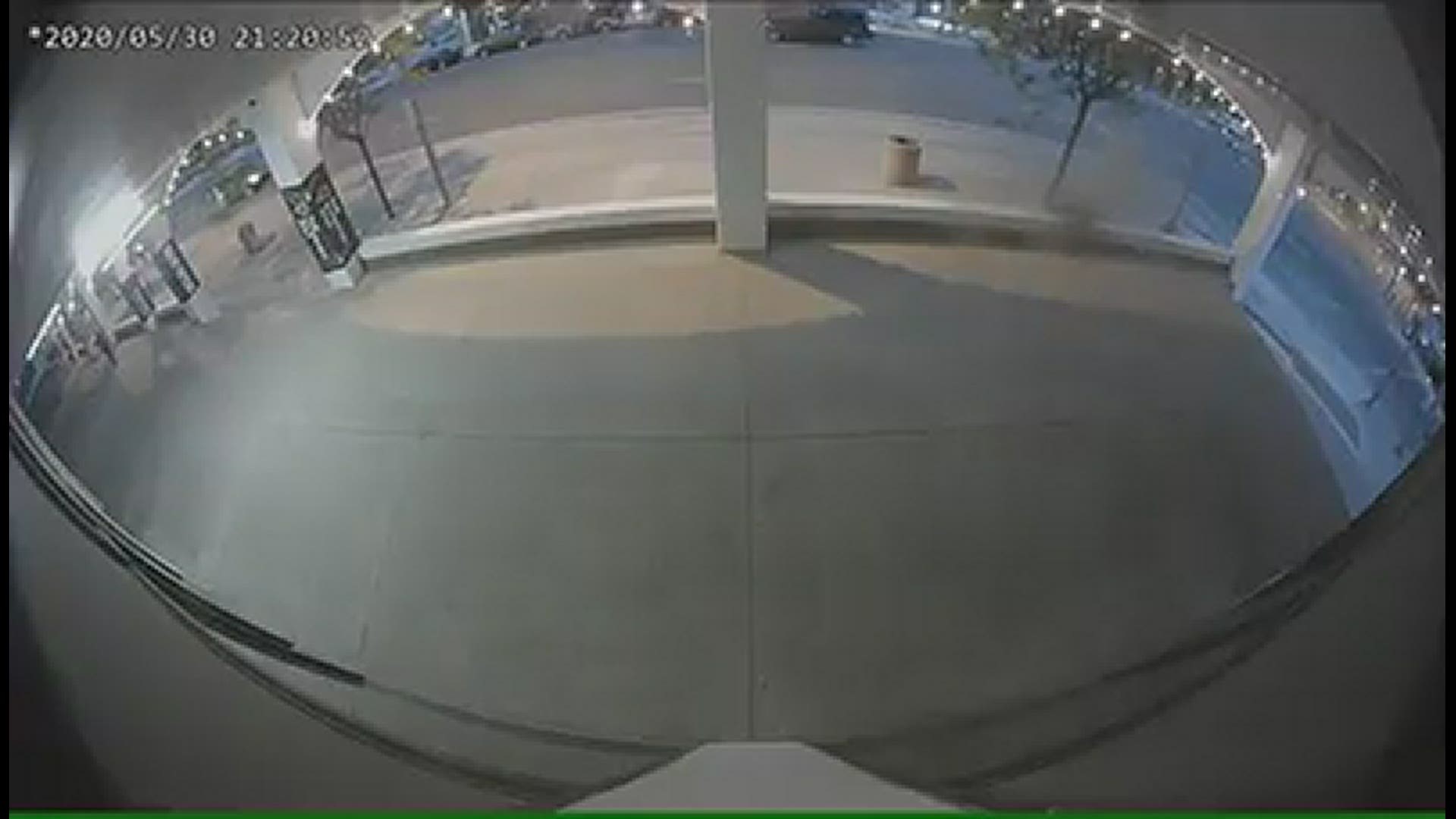 The owners don't believe the man was a protester at the rallies.

"The injustice faced by African Americans in our country, and in our city, is real. So is the pain and anger so many people of color feel in the face of this injustice. That is why I attended both protests that were held today. I attended these events to both show my support for the cause, and also, frankly, to listen. People in my position, and of my race, need to listen to what our fellow citizens are saying. We will never solve this problem without dialogue, and I am committed to helping lead Toledo through this conversation.

As committed as I am to the cause for which today’s protests were held, I am just as committed to protecting the safety of all citizens of our community. Now *is* the time to protest, but we can do so peacefully. Violence, in my opinion, is never the answer. Not in any form. Never. I do not support violence when it is directed by a citizen toward a police officer, nor when it is directed by an officer toward a citizen.

As a result, I have decided to impose a 9 p.m. curfew tonight for portions of downtown Toledo. This is being done to protect the safety of all residents of our community.

Tomorrow we will continue the important work we need to do to build the city and country we all want."

As night fell protesters began setting off what appeared to be fireworks at the Safety Building as police continued to try to maintain control. 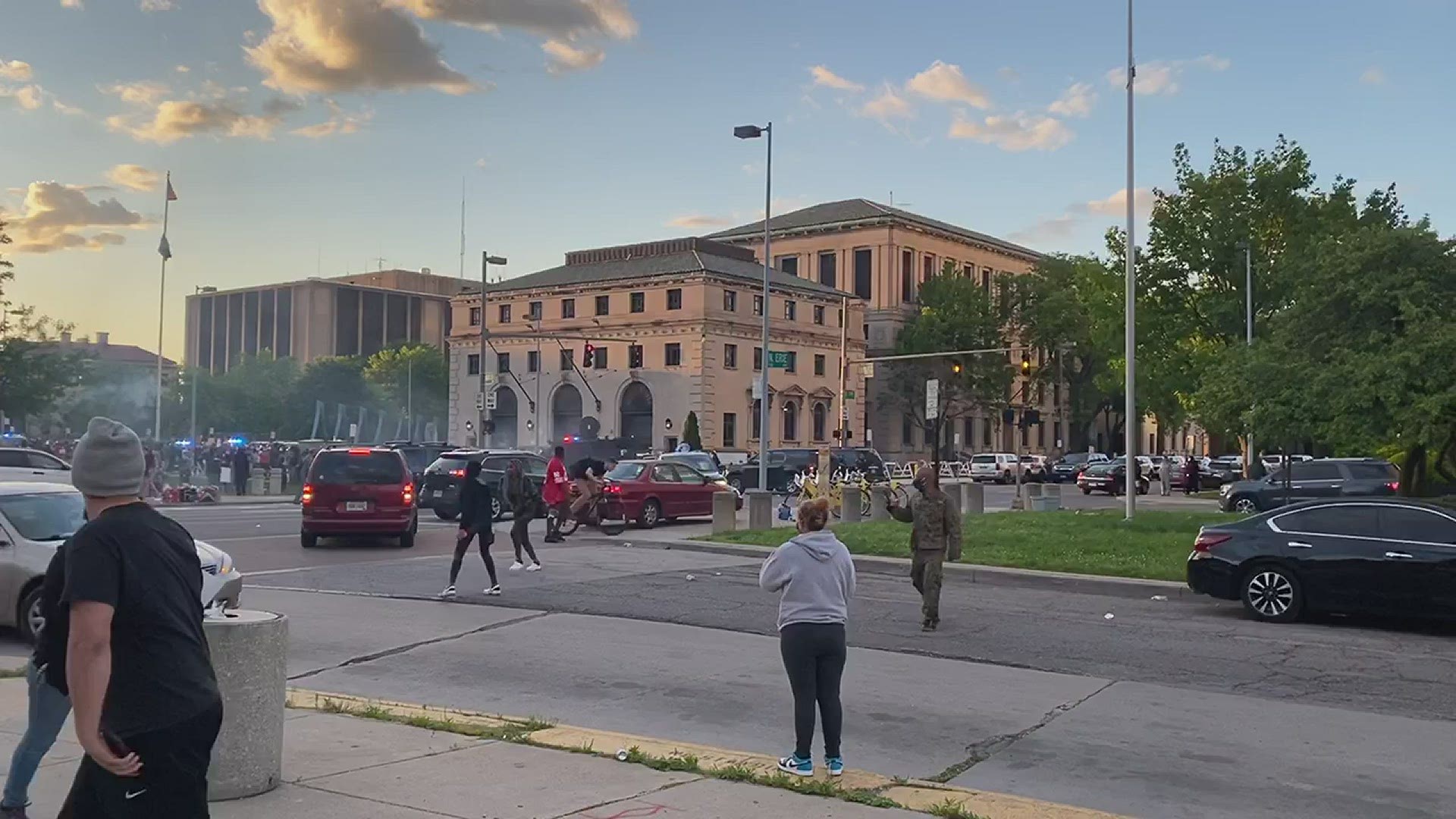 City of Toledo announces curfew for the area of Summit, Monroe, 17th, Franklin, East Woodruff and Cherry will be from 9 p.m. - 6 a.m. on Saturday night.

According to the Mayor's Office, no one is to be out in that area during these hours unless absolutely necessary, such as an emergency that includes traveling to and from a hospital for a health emergency.

Toledo Police once again began using tear gas to disperse protesters who had continued to gather at the Safety Building in downtown Toledo.

Some protesters were seen throwing water bottles at the police.

Police are once again using teargas to break up protests at the Safety Building in downtown Toledo WARNING: Graphic language

Protesters gathered near Madison St. and 17th where they had a brief standoff with police, who were wearing helmets..

Credit: WTOL
A protester shows his wound after allegedly being shot by a rubber or wooden bullet by the police near Adams and 17th Streets.

Police were also allegedly using rubber or wooden bullets on protesters at the Madison and 17th St. location.

WTOL 11 has reached out to TPD for comment but has not heard back.

Protesters gathered downtown in front of the Safety Building, kneeled in the street and chanted, 'Hands up, don't shoot' and 'Black Lives Matter' as police in riot gear lined the front of the building.

Just after 6 p.m. about a half dozen squad cars were seen speeding away from the Safety Building downtown.

Protestors began walking back to the original site of the rally near the Safety Building on N. Erie St.

WTOL 11 reporter Emma Henderson says some type of gas was used to disperse protestors at this point.

WARNING: Vulgar language can be heard in some of these videos.

The rally began to disperse around 4:30 p.m. when a group of protesters began walking down Cherry St.

Protesters gathered near the Safety Building to listen to speakers and activists from the Community Solidarity Response Network of Toledo and other organizations.