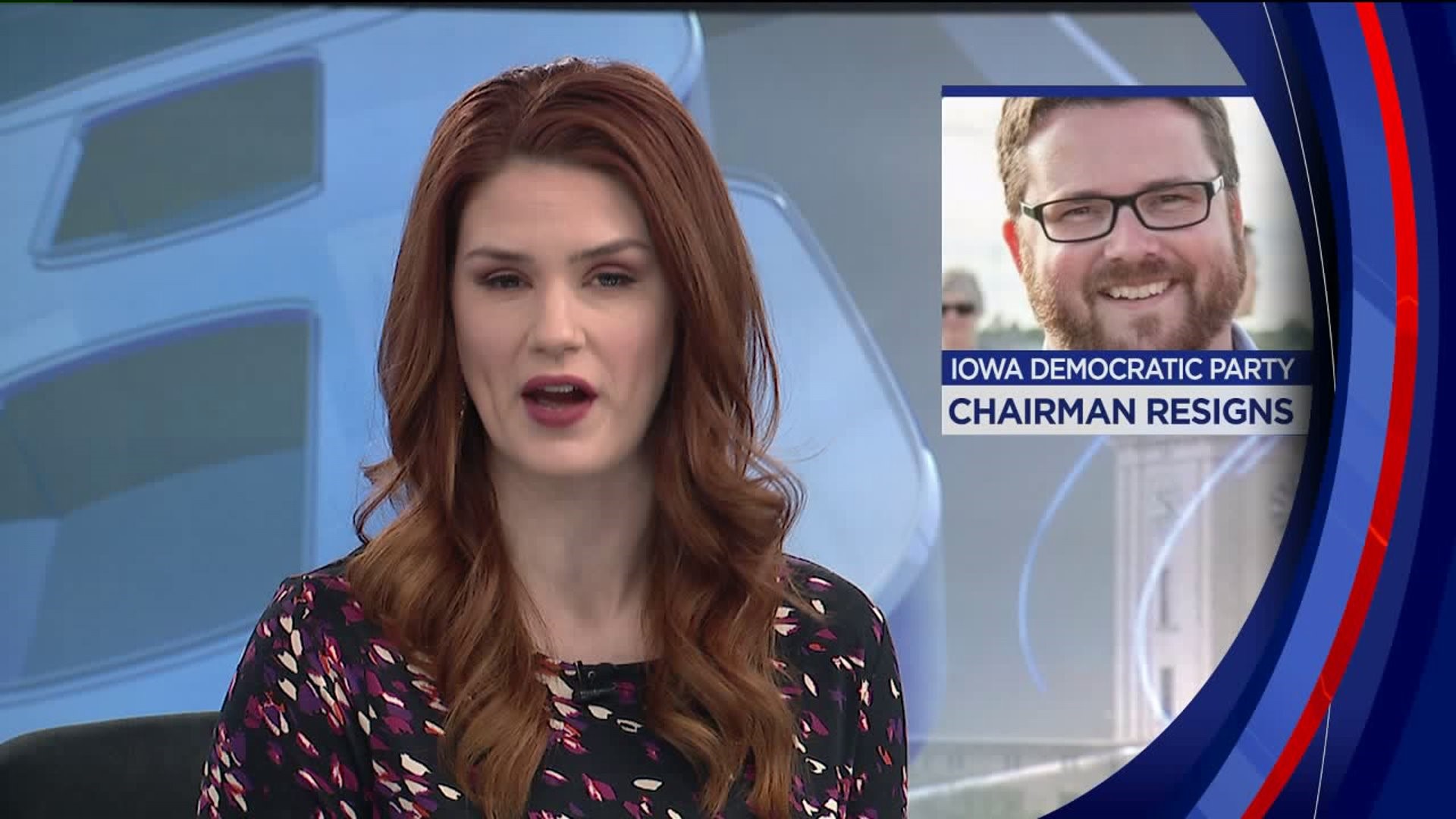 DES MOINES, Iowa-- The chairman of the Iowa Democratic Party announced his resignation Wednesday after a disastrous caucus process beset by technical glitches led to a dayslong delay in reporting the results, inconsistencies in the numbers and no clear winner.

The embarrassing episode also threatened Iowa’s cherished status as the first voting contest of the presidential primary season and led both front-runners to request a partial recanvass of the results.

“The fact is that Democrats deserved better than what happened on caucus night. As chair of this party, I am deeply sorry for what happened and bear the responsibility for any failures on behalf of the Iowa Democratic Party,” Price wrote in a resignation letter a week and a half after Iowa’s caucuses.

“While it is my desire to stay in this role and see this process through to completion, I do believe it is time for the Iowa Democratic Party to begin looking forward, and my presence in my current role makes that more difficult.”

He said his departure would occur as soon as the state party elects a replacement, and he called an emergency Saturday meeting to do so.

After a breakdown in tallying the results on Feb. 3, it took until Feb. 6 for the state party, which operates the series of roughly 1,700 local meetings statewide, to issue what it said are complete results.

In those figures, released by the party, former South Bend, Indiana, Mayor Pete Buttigieg leads Vermont Sen. Bernie Sanders by two state delegate equivalents out of 2,152 counted. That is a margin of 0.09 percentage points.

The Associated Press said it was unable to declare a winner, based on the available information. The results as reported by the Iowa Democratic Party, the AP believes, may not be fully accurate.

Price had called the delays in reporting results “unacceptable.” He said the party would conduct a “thorough, transparent and independent examination” of what caused the delays. He apologized for the breakdown in the process.

Both Buttigieg’s and Sanders’ campaigns requested a partial recanvass of the Iowa results, which the Iowa Democratic Party approved. The party says it expects the recanvass of more than 80 precincts to begin on Sunday and last two days. A recanvass is not a recount, but a check of the vote count against paper records created by caucus leaders to ensure the counts were reported accurately.

The party has said it will not change mistakes in the math and the only opportunity to correct it would be a recount, which would be the candidates’ next option after the recanvass is completed.

Price was elected to his second term as chairman of the state party in December 2018. In a statement released after his reelection, he noted that he was “incredibly proud” of the success that Iowa Democrats had in the 2018 midterms and looked forward to building on it.

“I cannot wait wait to work with them again on what could very well be one of the most consequential Iowa Caucuses of our time,” he said.

Price previously was part of several Democratic campaigns in Iowa, including those of former President Barack Obama and presidential candidate Hillary Clinton. Price also had served as the party’s executive director and led One Iowa, an LGBT advocacy group.

The Iowa Democratic Party instituted new rules for the 2020 contest that were meant to enhance transparency in the process.

In previous years, the Iowa Democratic Party reported just one number: the number of state delegates won by each candidate. For the first time, the party this year reported two other numbers — who had the most votes at the beginning and at the end of the night.

The additional data is a nod to Sanders and his supporters, who argued that the previous rules essentially robbed him of victory in his 2016 race against Clinton. That contest ended in a narrow delegate victory for Clinton in Iowa.

The letter is as follows:

Serving as Chair of the Iowa Democratic Party has been one of the greatest honors of my life.

When I took over this party, we were still reeling from a bruising 2016 election cycle. Many people locally and across the country believed that Democrats in Iowa were dead, and that we would never see victories again.

Over the course of 2017 and 2018, I was so proud to work with the members of our state central committee, our county chairs, activists, and volunteers to build real momentum across the state. In the end, we proved the naysayers wrong by flipping seven seats in the Iowa House, winning three statewide seats, and winning three of four congressional seats - sending the first women from Iowa to the House in the process.

While we could have rested on our laurels, we got back to work. Over the last 15 months, Democrats across the state came together to build out our 2020 caucuses. Our amazing staff fanned out across the state to build infrastructure in all 99 counties – even in places where local parties had gone dormant or didn’t exist at all. We worked to implement sweeping changes to our process that increased accessibility and participation for Iowans across the state and the globe.

By all accounts, the precinct and satellite caucus meetings themselves went well. Over the last week, we have received positive feedback on these meetings – how smoothly they ran, how the new procedures helped to make the night move more quickly and efficiently, and how more Democrats of all backgrounds came together united in the goal of defeating Donald Trump and electing new leadership for our country.

However, there is no doubt that the process of reporting results did not work. It was simply unacceptable. It is why I called for an independent review of the decisions and processes that lead to this failure. While this process is just beginning, know that the IDP is not the only party to blame for what happened last week. We worked collaboratively with our partners, our vendors, and the DNC in this process, and I am confident the review will be able to determine exactly what went wrong, what went right, and how we can avoid this from ever
happening again.

In the days following the caucuses, our staff worked under immense pressure to produce a complete report of results from the caucuses and was able to do so in 72 hours. Enduring threats to personal safety, taunts, and anger from people around the globe, our staff worked in a professional manner to produce a final result. I am incredibly proud of the work they did in those three days. These are people who are working hard towards our common goal of electing Democrats in November, and I deeply regret that these dedicated employees of our party had to endure such abuse.

The fact is that Democrats deserved better than what happened on caucus night. As chair of this party, I am deeply sorry for what happened and bear the responsibility for any failures on behalf of the Iowa Democratic Party.

While it is my desire to stay in this role and see this process through to completion, I do believe it is time for the Iowa Democratic Party to begin looking forward, and my presence in my current role makes that more difficult.

Therefore, I will resign as chair of the Iowa Democratic Party effective upon the election of my replacement.

I will be calling for an emergency meeting of the State Central Committee on Saturday at 1pm to elect an interim chair. Whomever is elected will oversee the completion of the recanvass and recount process and begin the process of healing our party.

Our paramount goal must remain to elect Democrats at all levels of office that will bring the voice of the people to our government.

In spite of the challenges these last few days, I leave knowing that the party is in a strong position to move forward. Thousands of new Democrats joined our party through our caucus process. The Iowa Democratic Party currently has more money than ever before at this point in an election cycle. The infrastructure built through these last few months will allow us to build an organization that will turn Iowa Blue in November. And Iowa still has the best-elected officials, candidates, volunteers, and activists of anywhere in the country.

Leadership requires tough decisions, and this is one of the toughest decisions I have ever had to make. Throughout my tenure as chair, I have always said I would do what is in the best interest of the party. With my decision, I hope the party can regain the trust of those we lost and turn our attention to what is most important – winning in November.