As both counties move into one of the largest phases in the vaccine rollout, the demand for shots far outweighs actual vaccine availability. 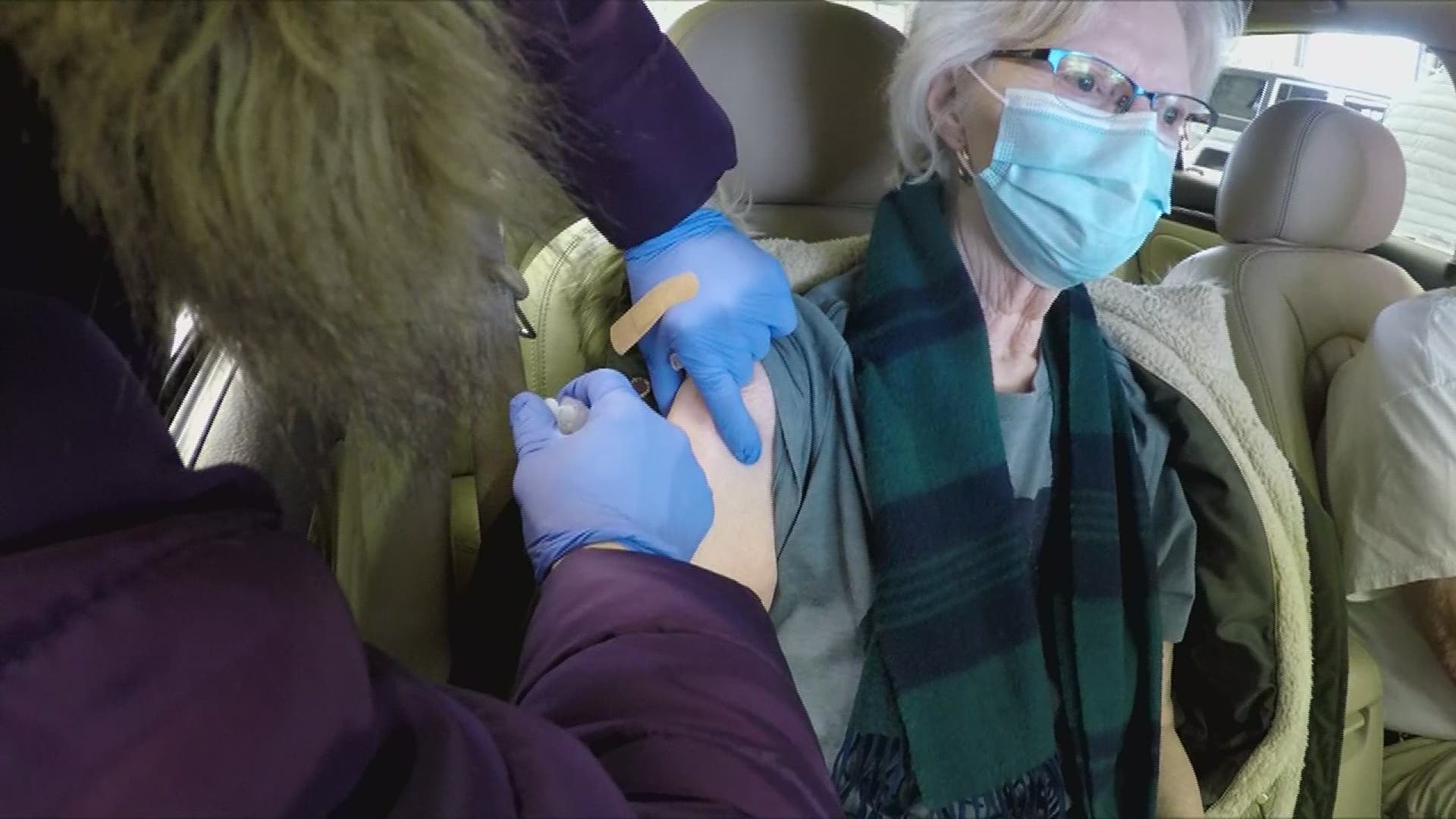 MILAN, Ill. — On Tuesday, Jan. 19, Rock Island County held its second mass vaccination clinic at the Greater Quad City Auto Auction in Milan. Within just a few minutes of opening, officials there were trying to warn the public that the line of cars waiting to be vaccinated had already exceeded the one thousand doses available.

Tuesday also marked the first day the clinic was open to those in phase 1b of the vaccination rollout in Rock Island County. That includes those 65 years old or older, correctional officers and inmates, and frontline essential workers such as teachers, first responders, and grocery store staff.

The county was able to administer 1,000 doses on Tuesday - the second week in a row they've delivered that many. Still, with a few hours left to go in the clinic, officials had to begin counting down the line of hundreds of waiting cars, and telling those at the end to try again another week, as there simply wasn't enough shots for everyone.

"We added more nurses, we added a whole bay. Each week we learn what will make this go as smoothly as possible," said Janet Hill, Chief Operating Officer of the Rock Island County Health Department. "There's no doses being held back. We get doses and we get 'em in arms."

Hill explained that this second phase of the vaccine rollout would be slower to work through than the first.

"Phase 1b includes about 65-66,000 people in Rock Island County. As you can tell, that is the bulk of our community. So it'll probably be many, many weeks, if not months, that we're in phase 1b."

Those from phase 1a who have not yet received their vaccine will be able to do so during this phase as well. Only those in phase 1c or phase 2 will be unable to attend the clinic.

But the county is expanding, in the hopes of vaccinating more - especially as the time for second doses roll around.

"We have more partnerships that are coming online. Right now Jewel Osco is doing people in phase 1a. We expect them to move to phase 1b with the rest of the state," explained Hill. "And then [Illinois] has talked about other partnerships that are coming online soon, including other pharmacies. And eventually, when there is enough vaccine in the community, it'll be at private physician offices also. So community healthcare, Jewel Osco, and Rock Island County Health Department, right now, are the ways to get the vaccine."

Hill says that the amount of vaccines the county receives is dolled out from the state, and is determined by population, disease-burden, and other health equity factors. It's a fluid number that can change depending on the county's need.

Across the river, Scott County is seeing a slower progression through the phases, but the same problem of high demand for limited product.

"The state of Iowa expects to move the state as a whole to phase 1b no later than February 1st," said Edward Rivers, Director of the Scott County Health Department.

Right now the county is administering vaccines through an appointment-only model, which allows patients to walk into the clinic rather than drive up like in Rock Island County. Rivers says it's working well for the county and that the rollout has been smooth - even saying Scott County could potentially vaccinate hundreds of people per day with the current model.

The hold up, he says, is that right now the county is only being given 800 vaccine doses each week.

"We'd love to have thousands of doses ready to be given, but that isn't the reality of the situation right now. It's because of how many doses we're getting every week. When we get a first dose allotment for the week, it's 800 doses... that's not gonna go very far," said Rivers.

For essential workers living in Iowa, but working on the Illinois side, that wait time can mean choosing to wait in line, rather than sign up for an appointment.

"I think it's really helpful when we have vaccinations," said Kara Fedje. "I mean, it's scientifically proven and we need to get as healthy as we can, as soon as we can."

Fedje is a college educator that works in Rock Island County, but lives in Scott County. On Tuesday morning, she lined up in Milan before 7am - and waited until nearly 11am for her shot.

She said it was important for her to get the jab as soon as possible, and that meant she couldn't wait for Iowa to begin phase 1b within the next few days.

"I am so excited to get this vaccination! I think it's really important that we do it as soon as possible. And I have to teach somewhat in person and some online, so I'm really excited to be able to be safe around my students," she said.

Fedje also explained that her mother is 72 and living in Iowa, which means she won't meet the age requirement for Iowa's phase 1b. Currently, the state says only those 75 years old or older, and those whose living situation and/or work environment put them at direct risk for contracting the virus.

"I really did it for her. I want to make sure that all of our elderly folks get protection and vaccinations," said Fedje.

Both counties warn that as they continue to work through phase 1b, it's going to be a slow rollout combined with one of the largest population subsets, and will take patience to work through.