Virus tests hospitals in pockets of US as some states reopen

Coronavirus outbreaks are testing the public health networks in pockets of the U.S., while some states prepare to lift lockdown measures, seeing signs of progress. 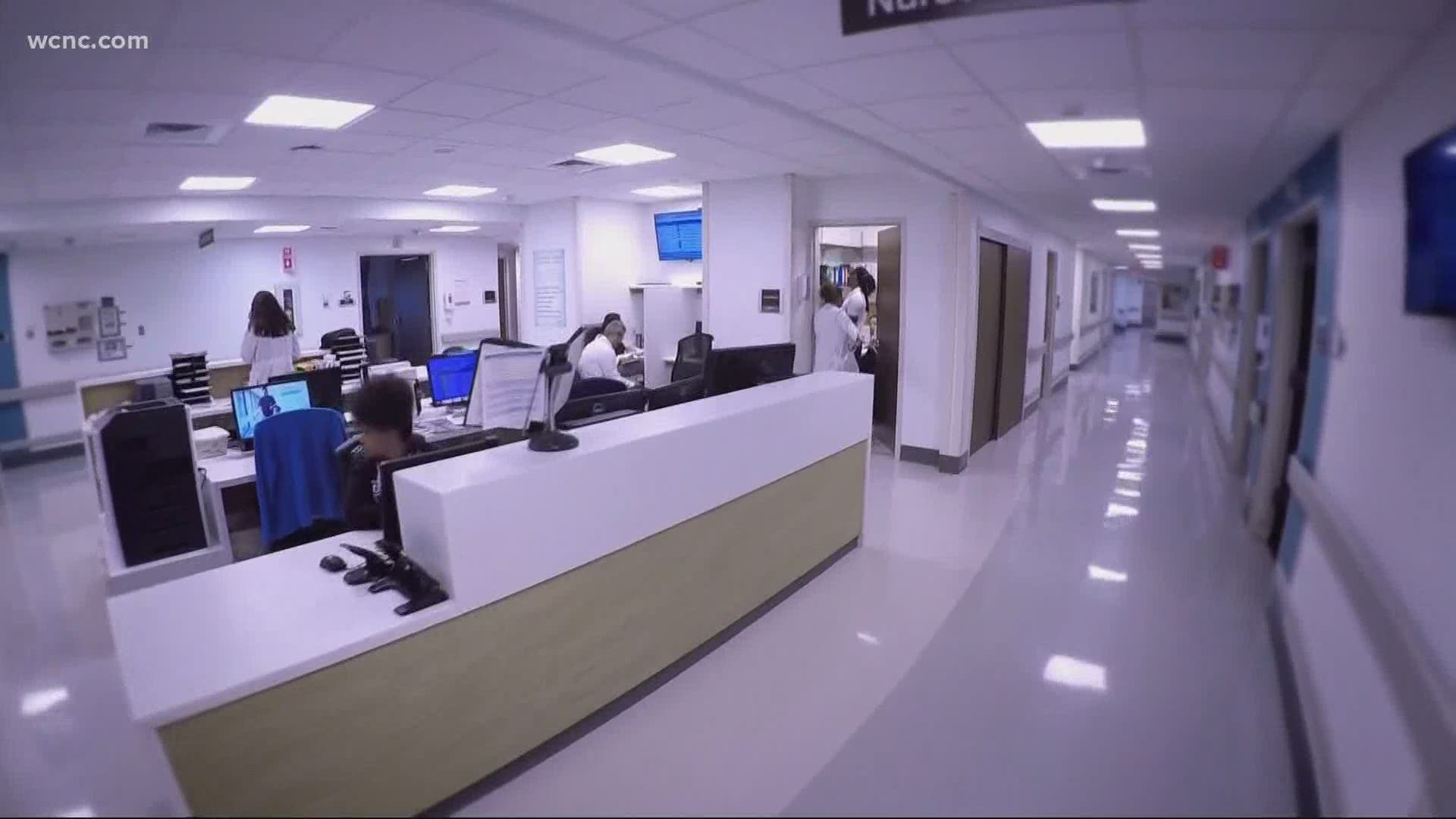 SILVER SPRING, Md. — From a hospital on the edge of the Navajo Nation to the suburbs of the nation’s capital, front-line medical workers in coronavirus hot spots are struggling to keep up with a crushing load of patients while lockdown restrictions are lifting in many other parts of the U.S.

Governors are starting to slowly reopen some segments of their local economies, pointing to evidence that COVID-19 deaths and new hospitalizations are peaking or starting to recede in their states. But a government whistleblower warned Thursday that the U.S. faces its “darkest winter in modern history” unless leaders act decisively to prevent a rebound of the virus.

While many state and local officials see modest signs of progress in the pandemic fight, coronavirus outbreaks are testing public health networks in pockets of the U.S.

Among them is a suburb of Washington, D.C. The head of a hospital system in Maryland’s Prince George’s County, a majority-black community bordering the city, said the area's intensive care units “are bursting at the seams.” Meanwhile, a civil rights group’s lawsuit claimed the county’s jail failed to stop an “uncontrolled” coronavirus outbreak and isolated infected prisoners in cells with walls covered in feces, mucus and blood.

“I would say we are the epicenter of the epicenter,” said Dr. Joseph Wright, interim CEO of University of Maryland Capital Region Health.

RELATED: 'We're in this together' | Here's some of the good happening in our communities during coronavirus

The hospital in Gallup, New Mexico, is on the front lines of a grinding outbreak on the Navajo Nation that recently prompted a 10-day lockdown with police setting up roadblocks to discourage non-emergency shopping.

Medical workers last week staged a protest over inadequate staffing and to urge the CEO of Rehoboth McKinley Christian Hospital to resign. The departure last week of the hospital’s lung specialist has limited its ability to treat COVID-19 patients, as people with acute respiratory symptoms are transported to Albuquerque some two hours away. About 17 nurses were cut from the hospital’s workforce in March, at least 32 workers have tested positive for the virus and its intensive care unit is at capacity.

“My staff is physically exhausted, emotionally exhausted and they are suffering from moral injury,” chief nursing officer Felicia Adams said.

Meanwhile, in Washington, Rick Bright, a vaccine expert who alleges he was ousted from a high-level scientific post after warning the Trump administration to prepare for the pandemic, told a congressional panel that the U.S. lacks a plan to produce and fairly distribute a coronavirus vaccine when it becomes available.

Asked by lawmakers if Congress should be worried, Bright, who wore a protective mask while testifying, responded: “Absolutely.”

President Donald Trump dismissed Bright in a tweet Thursday as “a disgruntled employee.” The White House has launched what it calls “Operation Warp Speed” to produce, distribute and administer a vaccine once it becomes available.

Bright’s testimony follows a warning this week from Dr. Anthony Fauci, the government’s top infectious disease expert, that rushing to reopen could “turn back the clock” and lead to more suffering and death, complicating efforts to revive the economy.

The U.S. has the largest outbreak in the world by far: over 1.4 million infections and nearly 85,000 deaths, according to a tally by Johns Hopkins University. Worldwide, the virus has infected more than 4.4 million and killed over 300,000. Experts say the actual numbers are likely far higher.

The pressure is on to staunch job losses in the U.S. after unemployment soared to 14.7% in April, the highest since the Great Depression. Another nearly 3 million applied for unemployment benefits last week as more companies slashed jobs.

Roughly 36 million people have now filed for jobless aid in the country in the two months since the coronavirus first forced millions of businesses to close, the U.S. Labor Department said Thursday.

Many states are lifting lockdowns, leading to tentative resumptions of commerce, but there are frustrations among some people still living under tough restrictions. In Michigan, hundreds of people, some armed, protested Gov. Gretchen Whitmer's stay-at-home order in heavy rain outside the state Capitol on Thursday, while about 500 people rallied outside the residence of Minnesota Gov. Tim Walz.

But elsewhere, Richmond, Virginia, opted out of the state's gradual reopening for now citing an increase in cases and the city's large minority population, and Kansas delayed reopening bars and bowling alleys.

Even in places that have relaxed restrictions, hospitals continue to operate on an emergency footing.

Georgia provided a network of hospitals with extra nurses so exhausted employees could take some time off and recover. The Northeast Georgia Health System, which operates four hospitals, is still struggling to buy the disposable protective gowns it needs. It has assigned workers to collect and sanitize suits so they can be reused, and volunteers are sewing gowns and masks.

“That’s our most critical need,” said Tracy Vardeman, the health system’s chief strategy officer. “We’re going through as many as 6,000 a day.”

The system’s largest hospital serves a county at the epicenter of the state’s poultry industry. About one-third of Hall County’s residents are Hispanic or Latino, a demographic that has accounted for up to 60% of the system’s COVID-19 patients. Officials are taking virus testing to a grocery store in the heart of the Hispanic community.

“I think there is increasing realization that this is a severe issue and we cannot take it lightly,” said Dr. Antonio Rios, a leader of the hospital system’s affiliated physicians’ group.

Officials say the community has been particularly affected in part because it is a gateway to the District of Columbia and many of its 909,000 residents are essential workers who continue to go to jobs every day. That largely mirrors the scenario in Queens, the epicenter of New York’s outbreak.

“We are certainly still very much in a very busy phase of this surge,” Wright said.

In China, where the pandemic originated, it has now been a month since authorities announced any new deaths from the coronavirus. The National Health Commission reported four new cases in the northeastern province of Jilin, where a cluster of uncertain origin has been detected in recent days.

China has maintained social distancing and bans on foreigners entering the country, but has increasingly opened up the world’s second-largest economy to allow both large factories and small businesses to resume production and dealings with customers.

But hot spots in other parts of the world continued to flare up.

Mexican health officials said Thursday they had recorded their largest one-day rise so far in confirmed coronavirus cases, 2,409, and that the country is at its “most difficult” moment of the pandemic. It was the first time new cases exceeded 2,000 on a single day in Mexico, though in percentage terms, the 6% increase was not the biggest.

Credit: AP
In this Friday, April 17, 2020, photo, a vial used to collect a nose swab sample is put into a collection bag as medical providers conduct coronavirus testing at Queen Anne Healthcare, a skilled nursing and rehabilitation facility in Seattle.