Local 5 spoke with several people Wednesday who came out to the Wayne County clinic and shared their reasons for being there. 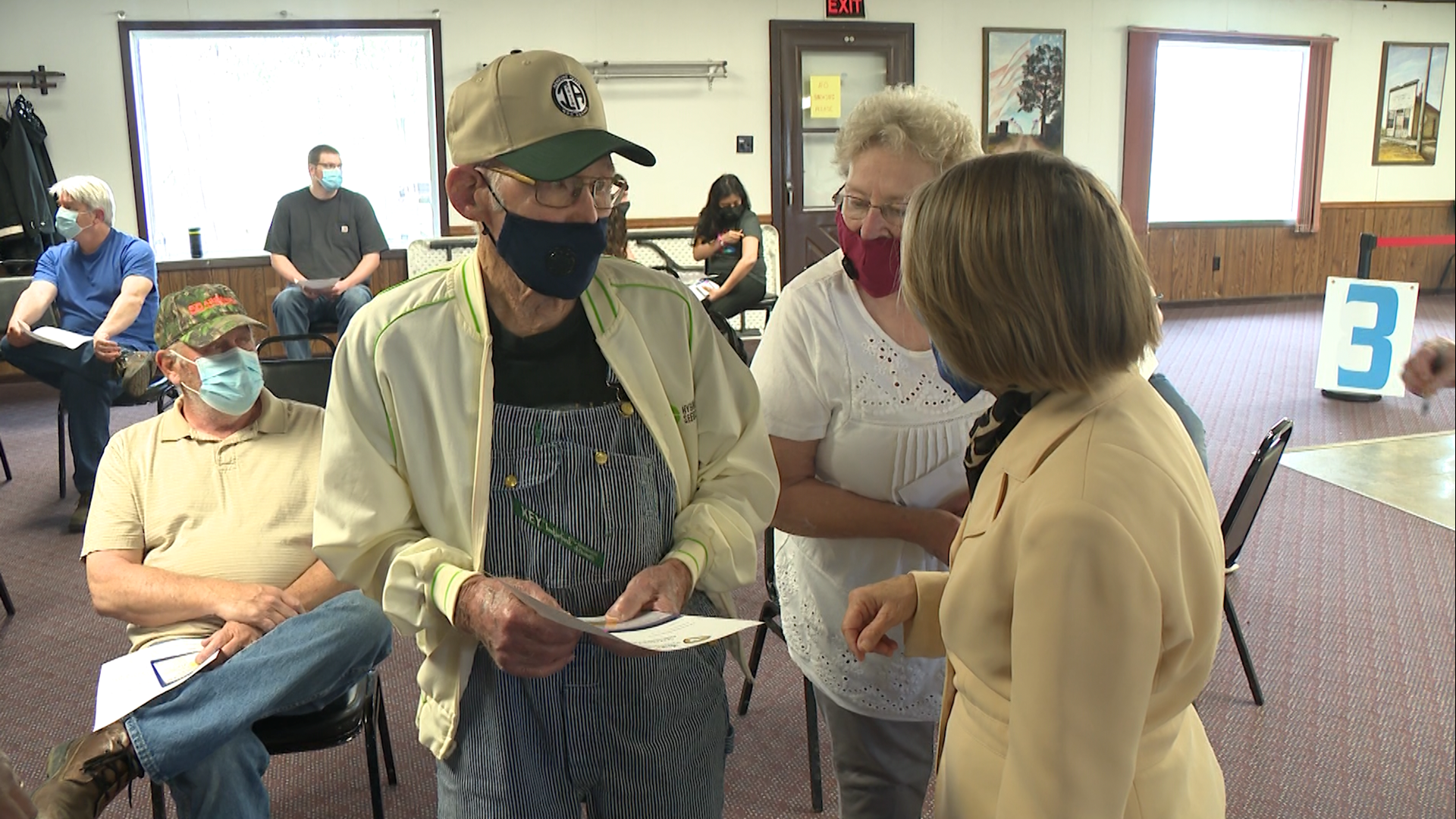 Volunteers in Corydon, along with the staff at Wayne County Public Health, are making sure the community is vaccinated, and people are coming from as close as a few miles away, and as far, as Houston.

Local 5 spoke with several people Wednesday who came out to the clinic and shared their reasons for being there.

"I was very skeptical," the 76-year-old Barb, who lives eight miles from Corydon, said. "I didn’t think it had been tested long enough or well enough. I was not going to get the shots."

Her husband, Bob, a 93-year-old retired farmer, felt the same.

His mind changed when his son got COVID-19 and became very ill. He had to spend a night in the hospital.

"We took care of him," Barb told Local 5. "When you get exposed and when you see how sick someone close to you can get, you decide you better do it."

This is me elbow-bumping 93-year-old retired farmer Bob Gill, of Corydon, Iowa at the vaccine clinic in Wayne County today. It's right on the Missouri border where there's a surplus of vaccines. Bob said he was very skeptical of the vaccine at first (1/2) pic.twitter.com/IFBPjuwtTk

RELATED: All adults in Iowa now eligible for the vaccine | Learn how to schedule an appointment

As a lawmaker who also happens to be a physician, she's in a unique position to not only show public support of the vaccine but also administer it, which she's been doing at each clinic, including the one in Corydon.

"It's just so celebratory that [my team] decided as a team that instead of the typical town hall, that we would go help administer vaccines and bring attention to how important this is," Miller-Meeks said Wednesday.

The congresswoman acknowledges the vaccine has been politicized.

"I want to take the politics out of it," she said. "We have a pandemic, its serious, it affects people, and the vulnerable populations."

Miller-Meeks spoke to the fears the Gills had about the speed at which the vaccine came out.

"Even though it’s miraculous that we got a vaccine for COVID-19 in nine months, we want to let people know that there were no shortcuts when it came to safety," she said. "It was pre-funded, there were regulatory synchronicities that allowed us to get a vaccine, and that’s one of the things that we should have in our playbook for the future."

Dr. @millermeeks vaccinated Sharon Tate, a woman who came all the way from Houston, Texas with her husband Charles, who works in the trucking industry. They both said there’s more availability of vaccine in Wayne County than where they’re from. pic.twitter.com/ChMp0IiHkK

RELATED: Rural Iowa pharmacist says convincing young people to get the vaccine is a big obstacle

Among the locals at the Wayne County clinic were Sharon Tate and Charles Wright, who cam all the way from Houston to get vacinated.

Wright's workplace provided him a list of Iowa clinics he could visit. And Tate scoped out options online, seeing Wayne County had a clinic with doses.

"I actually thought that the shot would hurt but it didn't hurt," Tate said. "I didn't feel nothing."

"As truckers we should've been one of the first ones also, because we're going state-to-state," Wright said. "And so my job Hirschbach, came up with a plan and they came up with a system and said 'Well since you’re in Iowa, you may as well get it done in Iowa.'"

After getting the vaccine? It may be time for a vacation.

"Go on a cruise," Tate exclaimed.

"Don’t be scared to get it done," Wright said. "If you aren’t going to do it for yourself, at least do it for your family. Take care of them. We’re on the road ... this is what we do. And we don’t mind doing it."