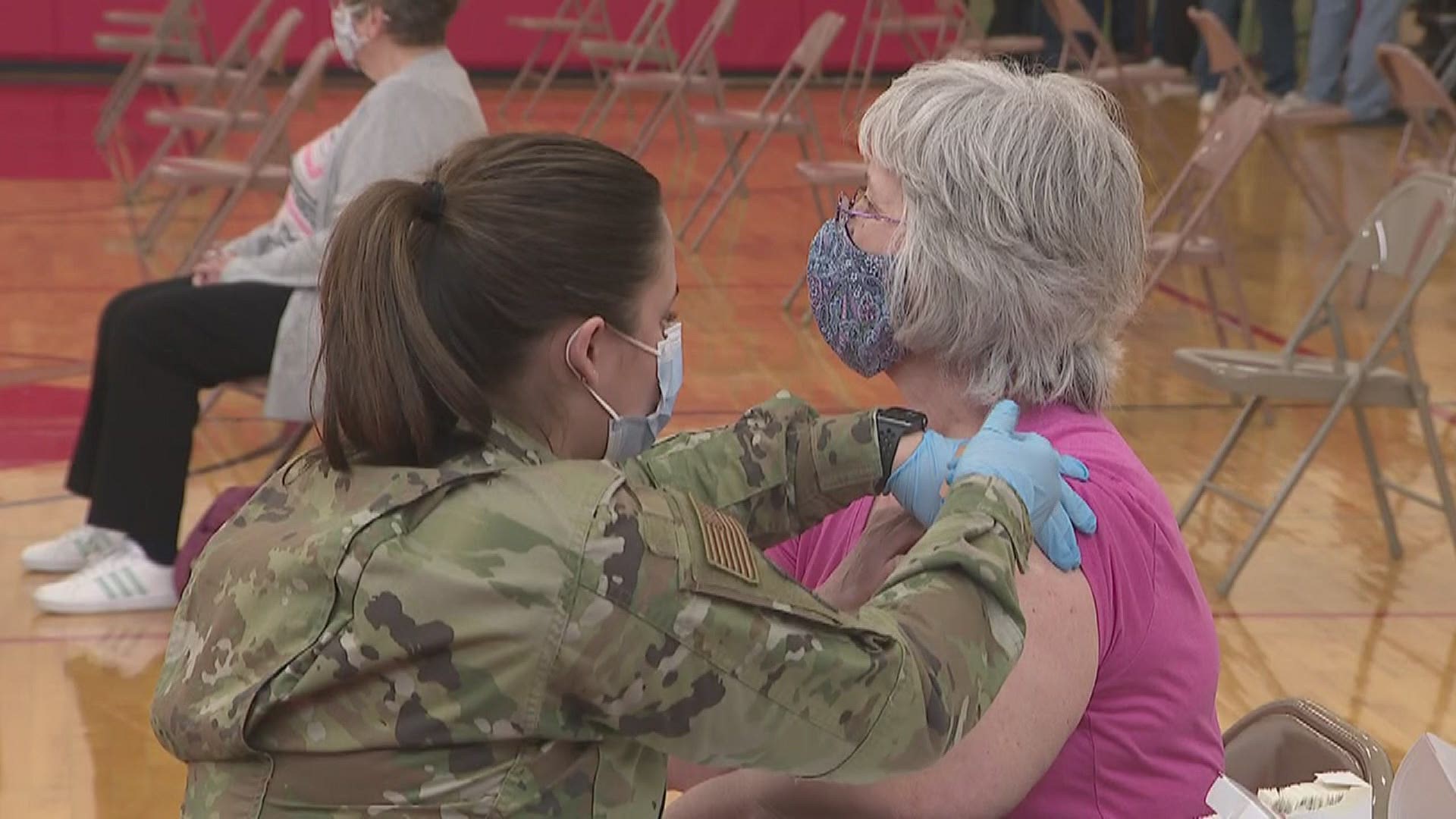 CHADWICK, Ill. — On Wednesday, March 31, 32 guardsmen and women from the Illinois National Guard administered 600 Johnson & Johnson vaccines to residents of Illinois' Carroll County - about 4% of the entire county.

That, combined with a second-dose clinic the county held earlier in the morning, meant 800 residents were fully vaccinated after Wednesday's efforts. In Carroll County, that's about 6% of the population.

It's part of the state's "Rapid Response Team" effort, which has been deployed to five area counties - Carroll, Ogle, Boone, Lee, and Whiteside - where the state is noticing an uptick in positive cases and slower vaccination rollouts.

Their first stop took them to Carroll County's Chadwick Junior High. When the one-time clinic was announced the week before, the county's health department says all 600 appointment slots filled up within two days.

"We're so happy to have this National Guard clinic here today just to increase our numbers," said Craig Beintema, Administrator of the Carroll and Stevenson County Health Departments. "For a long time, we weren't getting very many doses - just 100, 200 a week - so to vaccinate people, 14,000 people, that would take many months. So we're very happy that we can make a change here and move forward, make progress."

Carroll County has about 14,000 residents, but the health department explains that the vaccine rollout to those people has been slow. There's no hospitals or large, chain pharmacies in the entire county, meaning all of the administered shots have to come from the health department. And with only a few hundred doses delivered each week, they sometimes didn't have enough for a full clinic.

"It got to the point that we had to wait one week and add that to the next week's allotment so that we had enough to have a worthwhile clinic," said Beintema.

And over the past several weeks, they've seen an increase in positive cases. If that trend continues, there's few options for those who get sick. And in rural areas, the disease can spread quickly.

"It's difficult in a more rural area," explained Beintema. "You don’t have large metropolises or a lot of people in one town, so you have a lot of traveling. So traveling from small town to a larger town, you are moving virus around. And it is difficult because people out in the rural areas don’t have that extreme access to care."

Which made Wednesday's clinic all the more vital.

"This is what we're built for. We’re here to support the communities that may not have as much help as the bigger cities and it’s very rewarding for us we’re happy to be here," said Spence Krawiec, a Senior Airman with the National Guard.

Krawiec is a medic that administered many of the 600 single-shot doses on Wednesday.

"A lot of us were actually activated for the first mission, with the testing sites last year, so to be able to come back for the second mission for the vaccines and see everything come full circle has been very fulfilling," she said.

One of those people she helped, was JL Hunter from Lanark, Illinois. He'd been on the county's waiting list for a few months when he got the call to come down on Wednesday.

As a 60-year-old, he was unable to get the vaccine in many other counties, and had been waiting for Carroll County to slowly work through their own list. Now that he's vaccinated, he says he can reunite with his family.

For Sandra Jankovec, another county resident, the shot means she can go back to work. As a server, she'd been furloughed until she could get vaccinated.

"I'm happy, very happy," she said, after getting her dose. "I feel, what do you have to lose? Why not? It was so easy and it'll keep me from getting Covid."