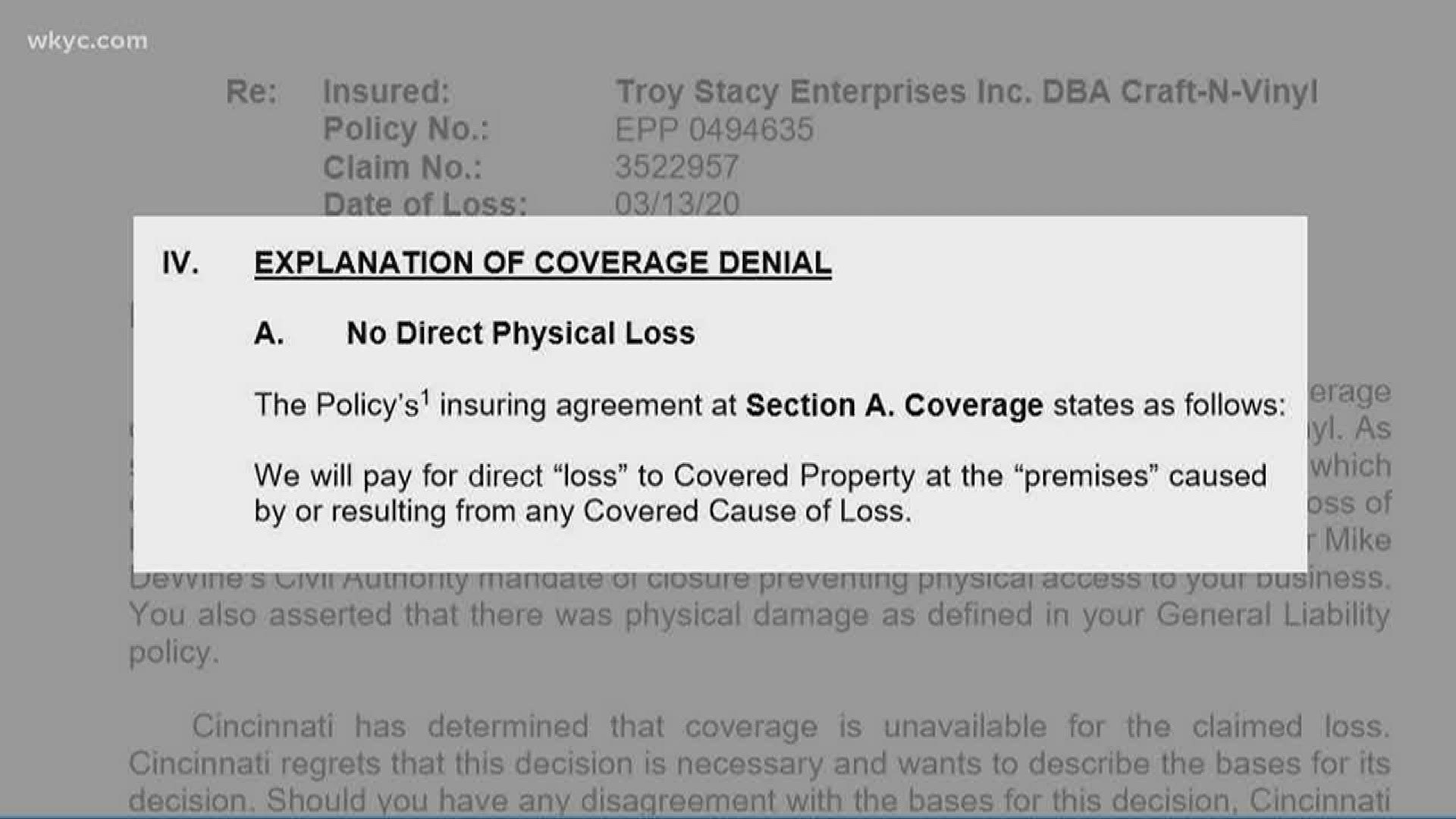 “Built this thing from the ground up,” he said. “Boot strapped it on our own. There were no bankers, no partner. This is something we did as a labor of love.”

Two years ago, Craft & Vinyl was born inside a refurbished building in Columbus' Grandview area, not only selling beer and records, but hosting musicians, improv and other talent.

Today, the music is dead. In the aftermath of Ohio’s response to the COVID-19 pandemic, his creation is on life support.

Revenue has dropped to nothing. The rent and other expenses pile up. Government-backed loans are elusive.

“I wish I could tell you…right now I’m flying by the seat of my pants,” he said.

Insurance? Sure, he has it. But his claim, like many other small businesses, was summarily denied.

Cincinnati Insurance denied Stacy’s claim, and many others, finding no physical damage occurred to the business.

Stacy is now listed as lead plaintiff in a class-action lawsuit filed against the insurance company. A spokeswoman for Cincinnati Insurance did not respond for comment.

A solution doesn’t appear to be in the offing.

“It’s heartbreaking to see what my fellow business owners are going through,” Stacy said. “Many of these guys aren’t getting the payroll protection program…and then there’s the back hand whammy from the insurance companies. That’s left a lot of people with simply no income.”

It’s a scenario playing out across the country as insurance companies deny COVID-19 claims by small business owners. At stake are potentially billions of dollars. It’s already led to a wave of class-action litigation that some predict will rival the scope of the massive opioid litigation cases.

“We believe it will be a national battle,” said attorney Kenneth Abbarno of the DiCello, Levitt Gutzler law firm. “We have not heard of any insurance company that honors any one of these appropriate claims.”

But Chicago-based attorney Adam Levitt said property damage is ironically exactly the claim the insurance industry made for virus exclusions in 2006 after the MERS epidemic. He said his firm is in contact with hundreds of businesses facing insurance denials. Cincinnati Insurance is one of most targeted companies for the litigation.

The attorneys argue that business owners held up their end of the contract, paying premiums for coverage to protect them from loss business. In Stacy’s case, the government forced the closure based on the pandemic.

“Had they actually worked the right way these should all be immediately paid out,” Levitt said. “The fact that they’re crying poverty now or they want to hit the reset button, isn’t the way a contract works.”

For many small business owners, they’ve reached a crossroad of survival. Many may never reopen.

Stacy says he won’t back down.

“I hope to be made whole…I’ve always paid my premiums… they right here… I’ve done my end of the contract and i can’tS help but feel they need to do the same.”

You can read Stacy's lawsuit here.

RELATED: Local businesses get shut out of stimulus money

RELATED: State of Ohio releases some details on COVID-19 cases in nursing homes after 3News investigation