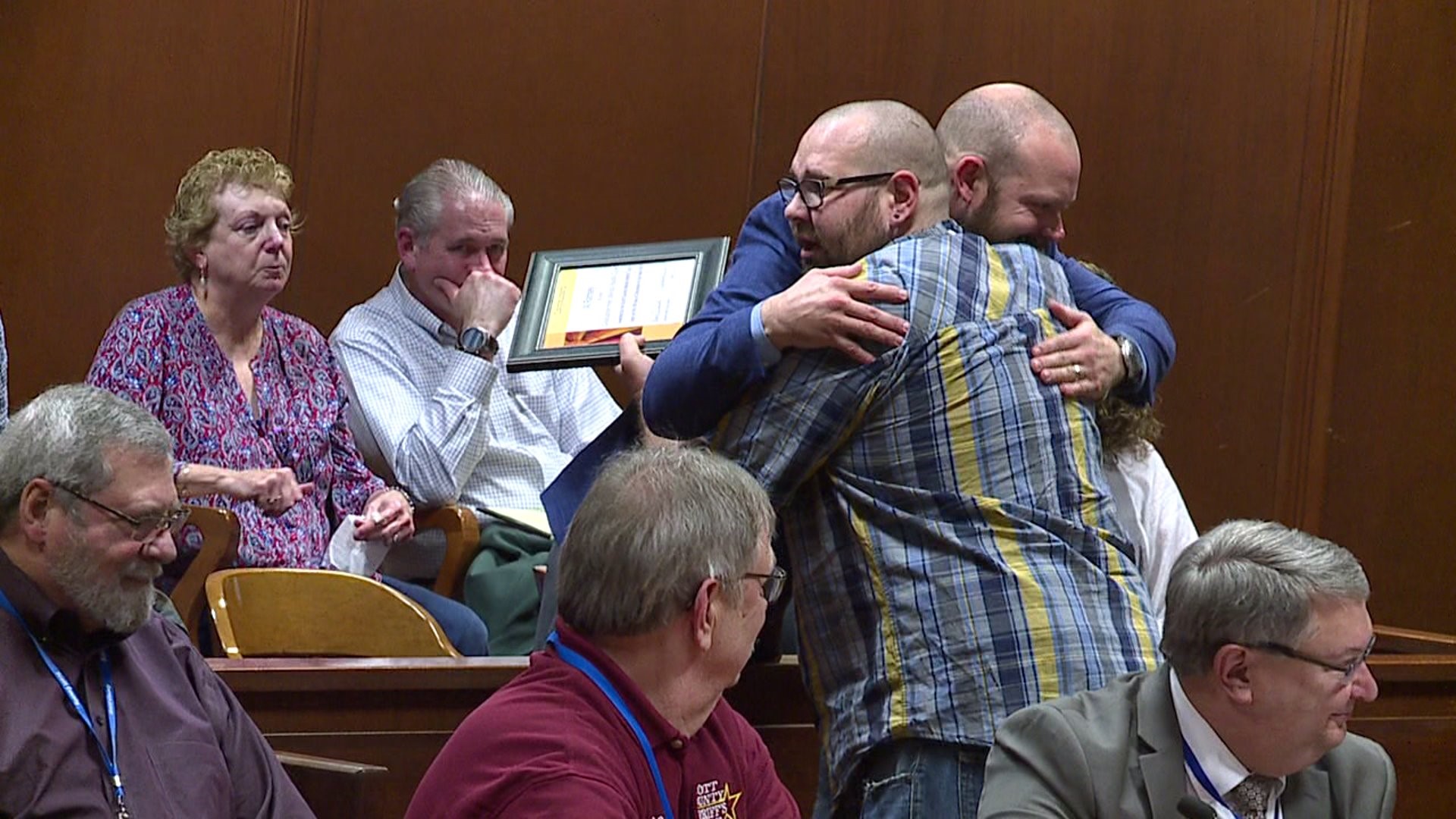 DAVENPORT, Iowa -- Courtroom three at the Scott County Courthouse was packed on Friday afternoon. Current and former inmates of the Scott County jail, their families, a defense attorney, probation officers, deputies sat on both sides of the room, even the jury box was filled with onlookers.

But for the four men appearing, one by one, before presiding Judge Mark Smith, today was a joyous moment.

He stood as the judge read his "diploma" out loud and shook his hand:

The room erupted in applause.

The Scott County Mental Health Court was established in July 2016, operating a jail diversion program that takes inmates with a chronic mental health illness out of jail and into an intense treatment program centered around structure, stability and support.

The goal is to reduce recidivism, alleviate the overcrowding of the county jail with mental health patients, and reduce costs.

A team consisting of Judge Mark Smith, a defense attorney, a volunteer  psychologist, probation and treatment staff assist meet weekly to go over each participant's progress and needs.

Thus far, 36 individuals have been diverted from the jail. Seven have graduated, including the group today. 14 are still currently in the program. But even for those who don't successfully complete the program, staff say they are able to connect people with the other resources and they continue to take medication and access services in the community

"What’s surprising once you get to know these folks, is that they’re just normal folks, except for their mental health problems, they would not be in this system," he said.

The program can last from 18 months to a couple years. For Al it took three hard years. He landed in jail over drug charges, all the while he was battling a diagnosis of schizoaffective disorder.

There were times he stumbled, relapsing and landing back in jail.

"I should be in prison now. I should  be dead," the 34-year-old told the courtroom on Friday.

"My last chance, the judge told me I was on thin ice and I messed up again. That day I thought I was gonna go to prison. I still came to court when I could’ve run. I accepted my consequences. I came to court and I didn’t go to prison. They gave me another chance."

"They have a lot to offer," Judge Smith said of the program participants. "As one of our graduates has done it, they have full time jobs now, they pay their rent, they pay their car payments. None of this was done before they went into this program. It has convinced me that but for their mental illness, they wouldn’t be in the criminal justice system."

Having served 21 years on the bench, he said, "Having the criminal justice system deal with them by incarceration, or even by street probation, isn’t working. So something else needs to be done. I think we offer that to the community."

The court has saved taxpayers $594,000 halfway through its third year by diverting inmates from the county jail. The program is currently financially limited to serve 15 clients, with funding in the first three years provided by Genesis Philantrophy and the Eastern Iowa Mental Health Region.

Even after graduating, Al said the mental health court team will stay with him as friends and supporters. For his part, he said he will continue to serve as a peer mentor in the program, helping others graduate from mental health court.

And, "I'll continue to be a better dad, and get a part time job."