Walz read messages left by visitors, took in murals and chalk art, and spoke with activists and people on scene. 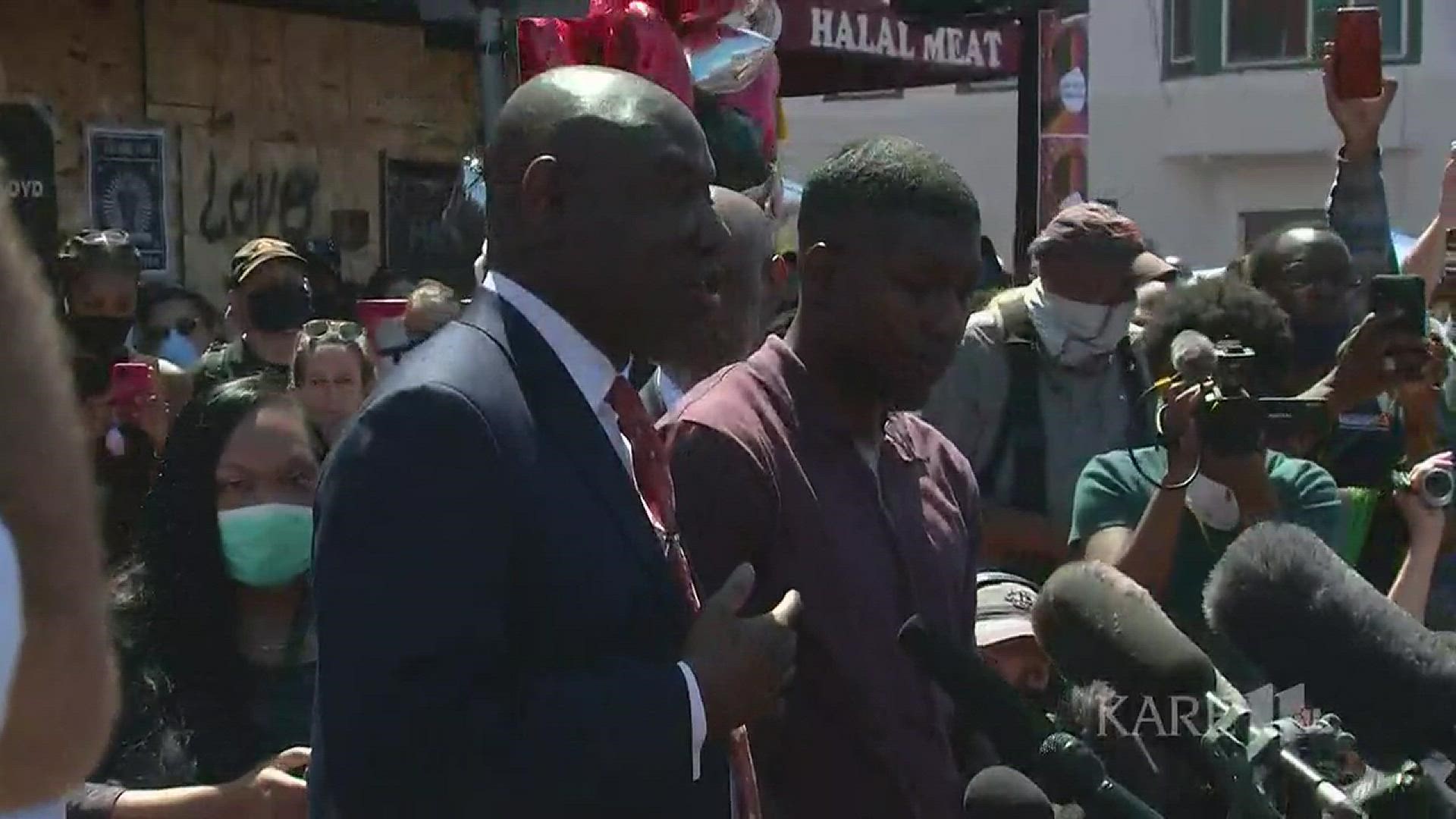 "We absolutely believe that he was tortured in the last 8 minutes and 46 seconds of his life," George Floyd's attorney Ben Crump said Wednesday at the site of Floyd's death at 38th and Chicago in Minneapolis.

"He died because he was starving for air. He needed a breath. And so we are demanding justice, we expect all of the police officers to be arrested before we have the memorial here in Minneapolis, Minnesota tomorrow," Crump said to cheers from the crowd gathered at the memorial. "Because we cannot have two justice systems in America, one for black America and one for white America."

Crump said he is confident Minnesota Attorney General Keith Ellison is "working feverishly" to do the right thing.

"No man or woman should be without their fathers," he said. "I appreciate everyone showing support and love."

Asked to give a message to protesters around the globe, Quincy said, "I just want to thank them for supporting my family, and to see justice for this."

Crump called out a moment in the criminal complaint where prosecutors say one officer said Floyd did not have a pulse, and Chauvin did not change position. Crump said that he believes other officers are "accomplices" and that Chauvin should be charged for first-degree murder, instead of the third-degree charge against him now.

"We are expecting these officers to be charged as accomplices for the killing of George Floyd," Crump said.

Crump called this moment in history "a tipping point to save America," saying the country is now facing a test of its commitment to life, liberty and the pursuit of happiness.

"Well America, that means black people too," he said.

The Floyd family attorney started repeating the words, "All the world is watching." The crowd then began to chant it along with him. 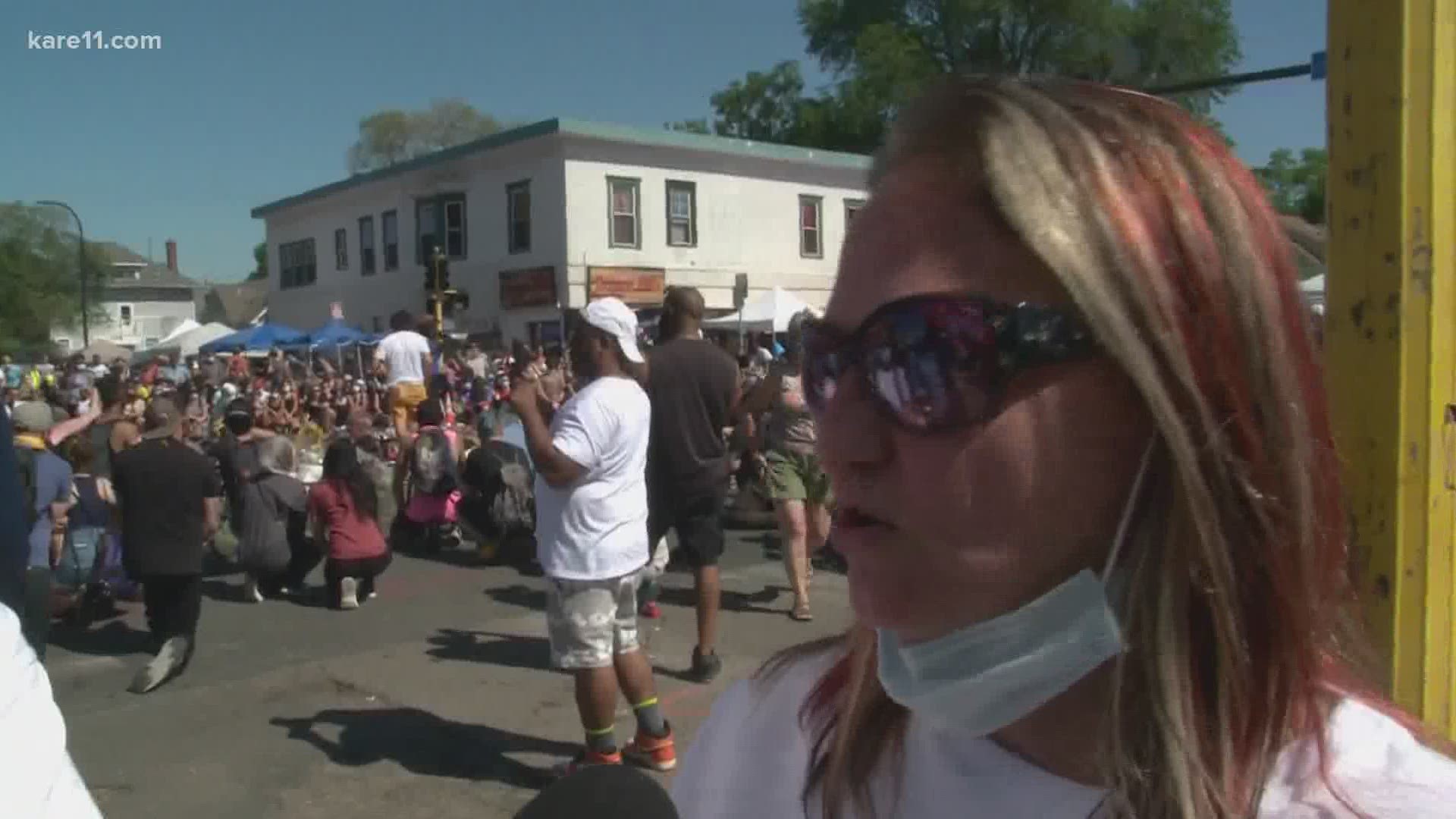 Family members of George Floyd are visiting the place where he died in Minneapolis police custody, at 38th and Chicago Avenue in Minneapolis.

Family members, as well as their civil rights attorney Ben Crump, are expected to speak to the public during the visit.

The visit comes one day after the Minnesota Department of Human Rights announced charges against the Minneapolis Police Department.

Former Minneapolis police officer Derek Chauvin has been charged with third-degree murder and second-degree manslaughter in Floyd's death, but the other three officers involved have not been charged.

For more than a week, Governor Tim Walz has been talking about the pain of George Floyd's death, and the impacts of the horrific event on the black community, Minnesota and the entire country. On Wednesday, Walz and his wife Gwen visited the massive and still-growing memorial for Floyd at 38th and Chicago near the south side of Minneapolis for the first time, to get a more personal sense of what people are feeling.

"There's many emotions that run through my wife and I as human beings with a 13-year-old," Walz told NBC reporter Morgan Chesky. "I think for me to understand this from a human perspective, I have got to see it personally and it's just really hard."

Walz read messages left by visitors, took in murals and chalk art, and spoke with activists and people on scene. He spoke of the need for meaningful change and not just lip service while the pain and outrage of Floyd's death is still fresh.

"There's the justice for George Floyd and his family, that's the moment in time, but the much broader pieces of that is the reform people are asking for," Walz said. "I'm someone who's a realist, I served in Congress, I understand that it takes progress, it takes building.... and then there's times history seismically shifts, and no one is looking for incremental change. If they see us put a little bill together with some housing assistance or something... we know this is about housing, we know it's about education, we know it's about health care, disparities, we know if those things are not coming together.... I don't know how this (the unrest) is not repeated."

"I'm not sure we get another shot at this as a country," Walz concluded.