Power lines may have started two wildfires over the weekend in the San Francisco Bay Area, even though widespread blackouts were in place to prevent downed line... 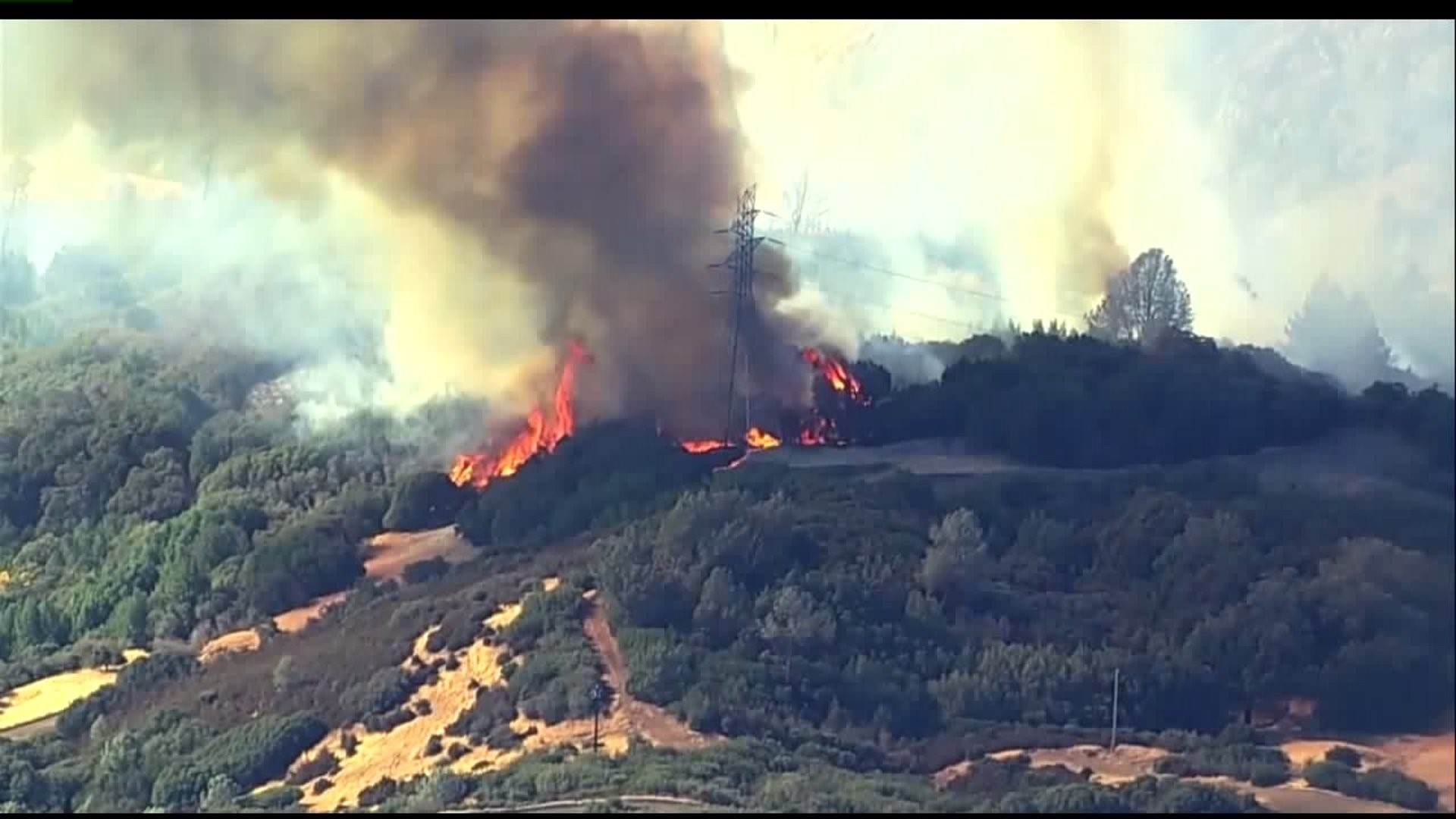 SANTA ROSA, Calif. (AP) — Millions of Californians prepared to be in the dark — some for five days, or longer — as the nation's largest utility said it was switching off power again Tuesday to prevent powerful winds from damaging its equipment and sparking more fires.

Pacific Gas & Electric Corp. said its latest blackout will start early Tuesday and affect 605,000 customers — about 1.5 million people —in 29 Northern California counties. The announcement came even before the last blackout had ended, which shut power to more than 2.5 million people.

It wasn't clear if power, that for many went out Saturday, would be restored before the next round of outages.

What was clear was that patience was wearing thin and frustration at the utility was growing. From the suburbs of San Francisco up north to the wine country, people searched for places Monday to charge phones and stocked up on ice for the non-perishable food.

Powerful winds were driving multiple fires across California and the deliberate shut-offs were intended to prevent blazes. Crews are battling a huge wildfire in Sonoma County wine country that has destroyed 96 buildings.

Petaluma resident Scotty Richardson, whose lights went out Saturday, said the prospect that power might not be restored for days makes him "furious, furious."

Richardson was out Monday getting breakfast, charging his phone and making business calls at the Lumberjacks restaurant in Petaluma. He vented frustration at the on-again, off-again roller coaster of outages but also anger at the utility's role in causing deadly fires in the past, and apparently sparking some of this season's fires.

"PG&E can't figure out how to deliver power reliably without killing people," he said. "This is more than three strikes — it's a failure of epic proportions."

Richardson and his fiance run a business out of their home, so "it's imperative that we have electricity. Everything is done for us by a computer or phone," he said. Refrigerated foods have spoiled and he worries that the ongoing outages might lower property values.

"This has been a massive inconvenience," he said. "This can't be the new normal."

PG&E is under severe financial pressure after its equipment was blamed for a series of destructive wildfires during the past three years. Its stock dropped 24% Monday to close at $3.80 and was down more than 50% since Thursday.

Many Californians are skeptical of PG&E's motives for the blackouts, and feel the utility is more concerned with its finances than the massive inconvenience it's causing.

"It's so obvious it's just to protect them from more liability," Janet Luoma of Santa Rosa said at a Red Cross evacuation shelter.

At the shelter in Santa Rosa, Chris Sherman plugged his laptop into a wall outlet and charged his phone while he waited for the all-clear to go home, anticipating that once he did he could lose power.

"They don't seem to know what the hell they're doing," he said about PG&E. "I'm not sure that they're really protecting anything."

The company reported last week that a transmission tower may have caused a Sonoma County fire that had forced nearly 200,000 people to evacuate.

PG&E said Monday its power lines may have started two wildfires over the weekend in the San Francisco Bay Area, even though widespread blackouts were in place to prevent downed lines from sparking in dangerous winds.

The fires described in PG&E reports to state regulators match blazes that destroyed a tennis club and forced evacuations in Lafayette, about 20 miles (32 kilometers) east of San Francisco.

The fires began in a section of town where PG&E had opted to keep the lights on. The sites were not designated as a high fire risk, the company said.

In Lafayette, where many people lost power on Saturday, people criticized PG&E for poorly communicating about the shutoffs.

"PG&E has spent millions of dollars giving bonuses to their executives, but they can't keep up with their infrastructure needs," she said. "It's very frustrating."

More than 900,000 power customers — an estimated 2.5 million people — were in the dark at the height of the latest planned blackout, nearly all of them in PG&E's territory in Northern and central California. By Monday evening a little less than half of those had their service back.

Southern California Edison had cut off power to about 800 people as of Monday night and warned that it was considering disconnecting about 400,000 more as winds return midweek. The company also faced a growing backlash from regulators and lawmakers.

"It's hard for me to separate the outage and strong winds from the possibility of losing my home again. It's a lot of traumatic memories."

U.S. Rep. Josh Harder, a Democrat from Modesto, said he plans to introduce legislation that would raise PG&E's taxes if it pays bonuses to executives while engaging in blackouts.

The Public Utilities Commission plans to open a formal investigation into the blackouts within the next month, allowing regulators to gather evidence and question utility officials. If rules are found to be broken, they can impose fines up to $100,000 per violation per day, said Terrie Prosper, a spokeswoman for the commission.

The commission said Monday it also plans to review the rules governing blackouts, will look to prevent utilities from charging customers when the power is off and will convene experts to find grid improvements that might lessen blackouts during next year's fire season.

The state can't continue experiencing such widespread blackouts, "nor should Californians be subject to the poor execution that PG&E in particular has exhibited," Marybel Batjer, president of the California Public Utilities Commission, said in a statement.

PG&E has set up what it calls Community Resource Centers in areas affected by the power outages, where people can go to charge phones and laptops, get free water, snacks, flashlights and solar lanterns. At one of them, in Berkeley, a few dozen people sat around Monday morning charging their phones, comparing outage stories and seeking information.

"Any word when we're going to get power?" asked Renata Polt, 87. She said she had expected the power might be out for one day and felt "dismay and anger" about the extended outage.

Cell phone coverage in parts of Berkeley was very spotty during the outage, and residents said they heard it was because cell phone towers didn't have backup power.

"It's like, really? Nobody thought of that?" said Alexandra Cons, who lost her house in a deadly 1991 fire that raged through the Berkeley hills. This week's ferocious winds combined with the utter darkness during the blackout at night have been hard on her.

"It's hard for me to separate the outage and strong winds from the possibility of losing my home again," she said. "It's a lot of traumatic memories."