A man who repeatedly supported anti-Semitic views was arrested in a plot to bomb a historic Colorado synagogue. 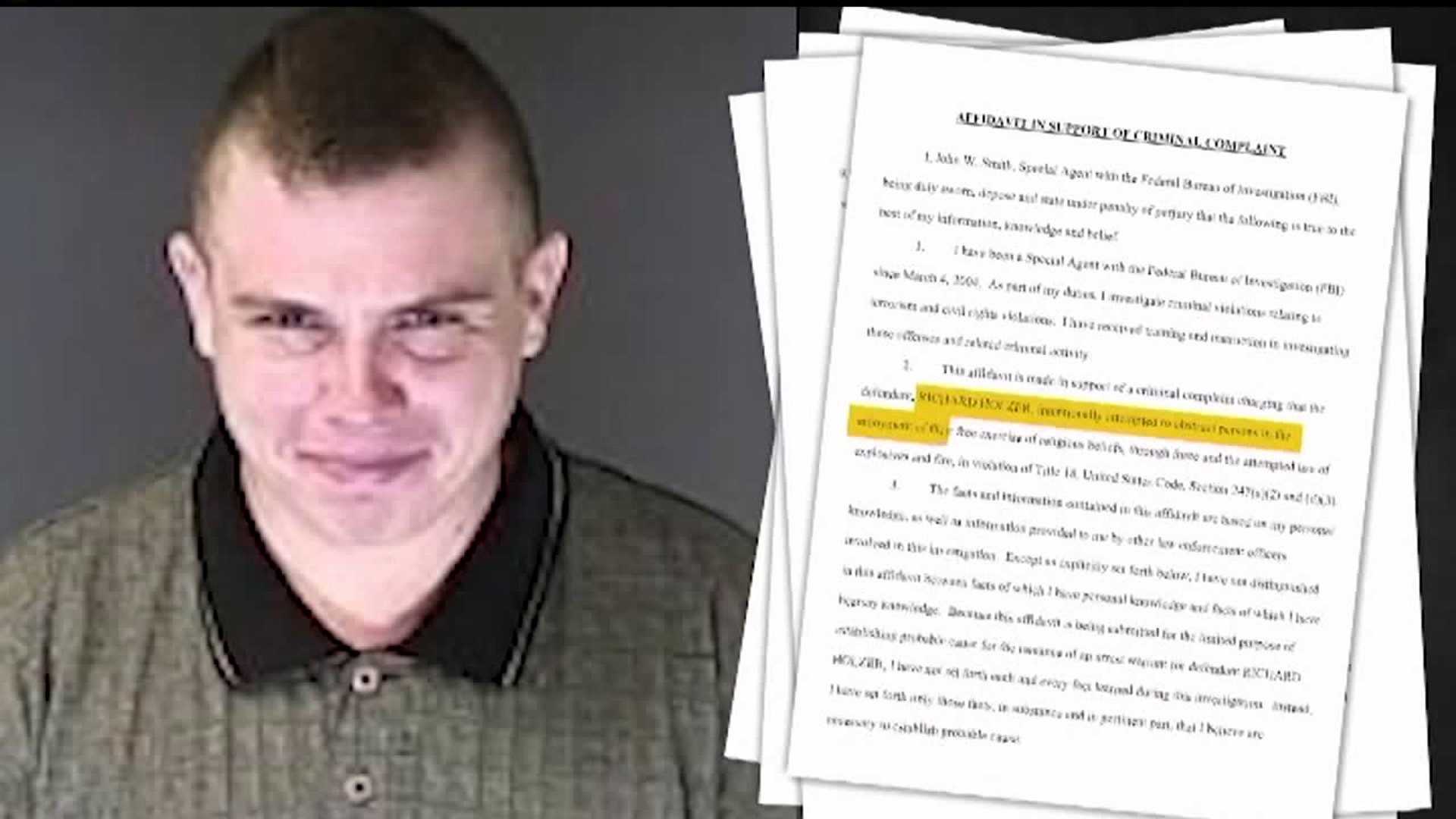 DENVER (AP) — A man who repeatedly espoused anti-Semitic views has been arrested in a plot to bomb a historic Colorado synagogue, federal officials said Monday.

The co-conspirators in the plot turned out to be undercover agents, who arrested the man shortly before he planned to bomb the synagogue early Saturday morning, according to court documents.

Richard Holzer was arrested Friday in Pueblo just after the agents brought him what he believed were two pipe bombs along with 14 sticks of dynamite to blow up Temple Emanuel. In fact, the explosives were incapable of causing damage, authorities said.

Holzer, 27, described what he thought were explosives as "absolutely gorgeous" and said they should go ahead with the attack overnight to avoid police, the court document said.

Holzer, who lives in Pueblo, briefly appeared in court on Monday in handcuffs and the same gray polo shirt with a black collar he wore in his arrest photo. He told U.S. Magistrate Judge Kristen Mix that he understood the charge against him, and she scheduled his next court date for Thursday. She granted his request for a public defender who she said would be appointed before the next hearing when it will be determined whether he can be released as the case proceeds.

The Office of the Federal Public Defender in Denver said Monday it does not comment on its cases.

Holzer was in federal custody in the Denver area, Jeff Dorschner, a spokesman for the U.S. Attorney's Office for Colorado, said.

The foiled plot is the latest attempted attack against a synagogue in the U.S. in just over a year.

In October 2018, a shooting at the Tree of Life synagogue in Pittsburgh killed 11 people and became the deadliest attack on Jews in U.S. history. According to the Anti-Defamation League, Holzer's arrest is the 13th time someone has been arrested on accusations of plotting attacks or making threats against the Jewish community since then.

In April, a woman was killed and three people were injured when a man opened fire inside a Southern California synagogue with an AR-15 military-style rifle.

The investigation into Holzer began after an undercover FBI agent purporting to be a woman who supports white supremacy contacted him on Facebook.

Holzer repeatedly espoused anti-Semitic and white supremacist views in his messages with the agent. "I wish the Holocaust really did happen...they need to die," he wrote her on Facebook, according to the court documents.

Holzer told the agent he had checked out the temple property and met with undercover agents at a Pueblo motel on Friday. He brought a copy of Adolf Hitler's "Mein Kampf" with him, displayed a Nazi armband and appeared animated on the drive to the motel, the documents said.

The agents then arrested Holzer, who waived his right to remain silent and spoke to investigators, the documents said.

"He referred to the plan as 'my mountain' and to Jews and Synagogues as a 'cancer' to the community," the document said.

He also told agents he didn't want to hurt anyone but would have proceeded with an attack if he knew someone was inside, the papers said.

"Mr. Holzer repeatedly expressed his hatred of Jewish people and his support for a racial holy war," Dunn said at a news conference.

If convicted of a pending domestic terrorism charge, Holzer could face 20 years in prison, Dunn said.

The ADL had been monitoring Holzer's online activity since May 2016 and had shared information about what it observed but not regarding the alleged plot, said Scott Levin, director for the organization's Mountain States Region.

According to court documents, Holzer claimed that he had previously hired a man nicknamed "Mexican Hitler" for $70 to "hex and poison" the synagogue by putting arsenic in its pipes. But investigators could not corroborate that claim.

It has a congregation of about 30 families and a rabbi from Denver who travels to Pueblo twice a month. Pueblo is about a two-hour drive south of Denver. A voicemail left at the temple wasn't immediately returned.

"Mr. Holzer will now have the opportunity to explain his behavior through our court system in a constitutional way — which in the spirit of irony, protects religious freedom as one of its most golden rules," Pueblo Police Chief Troy Davenport said.