In April, a 21-member search committee narrowed 79 applicants to four. 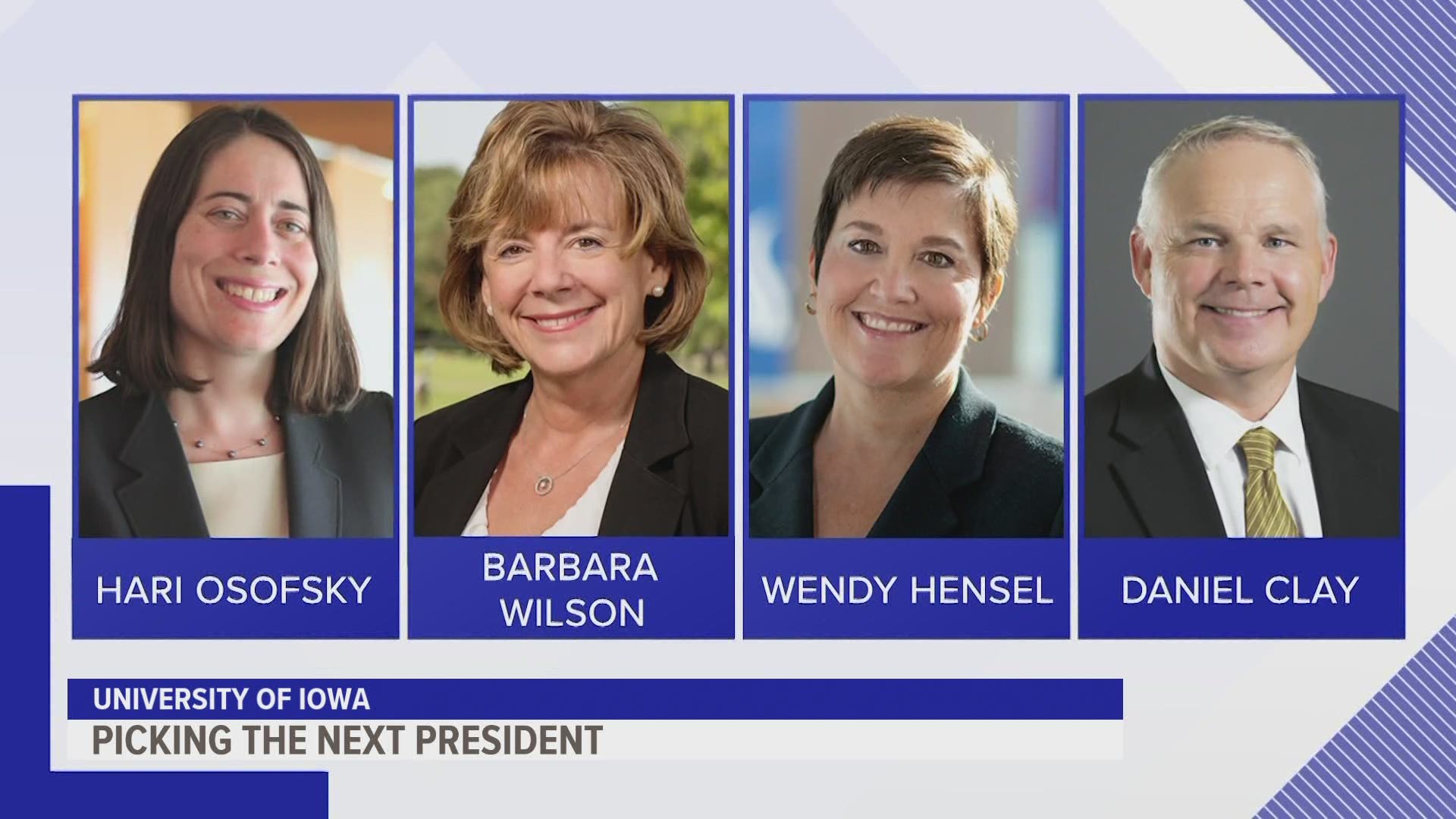 IOWA CITY, Iowa — A candidate pool of 79 applicants has been narrowed to four finalists for the next President of the University of Iowa.

Following the retirement announcement of President Bruce Herrald last October, the Iowa Board of Regents named two chairs of what would become a 21-member search committee comprised of students, staff, and alumni.

The Board of Regents plans to name the president at 4:00 p.m. Friday.

Each of the four candidates had a campus visit in April in which they spoke at a public forum that was streamed live on YouTube, taking questions from committee members and students.

A two-page job description developed in December paints a character portrait of who the university is seeking to lead. Qualities like emotional intelligence, the ability to innovate, and a commitment to diversity, equity, and inclusion were listed in the profile.

Below are descriptions of each finalist.

Hari Osofsky is the dean of Penn State Law and the Penn State School of International Affairs. The Yale graduate says a core focus of her leadership has been "education as a pathway to opportunity," emphasizing recruitment of students from diverse backgrounds and those who are first-generation college students.

"I’ve seen firsthand the transformational power of education and the importance of pipelines, to degree completion," said Osofsky in a forum April 12. "Launching students into careers and to provide opportunities for lifetime learning."

Osofsky says she's passionate about research collaboration and would form strong relationships with other research universities.

Barbara Wilson is the executive vice president of academic affairs at the University of Illinois. The scholar of communication studies describes herself as a "facilitator, translator, and energizer" and has done extensive research on the effects of media on children.

She says she fosters inclusion through team building.

"When I create teams, what I'm looking for is diversity of perspectives," said Wilson in a forum April 15. "As a leader, I'm regularly comfortable in those spaces where I'm connecting disciplines and thinking about how to bridge divides and bring people together to solve those thorny problems that we're all faced with today in society."

Wendy Hensel is the senior vice president and provost of academic affairs at Georgia State University. The Harvard Law grad and former employment discrimination lawyer says one of her top qualities is being a "complex problem solver."

She says she hopes to use innovation to reach underserved students throughout the admissions process. At Georgia State, she helped develop artificial intelligence to answer financial aid questions of students whose parents weren't around to help.

"We created a chat bot that initially answered 20,000 questions and now answers 50,000 questions," said Hensel in a forum April 19. "I believe we can do that here by employing artificial intelligence to provide a close touch at scale and help students in their journey towards success."

Daniel Clay is the only finalist with experience serving on the University of Iowa's campus, as the current dean of the College of Education.

"I believe I'm uniquely qualified," said Clay in a forum on April 22. "I fundamentally know and appreciate what we have, but I also know that we can do better."

Clay says he's a nationally recognized scholar and author who has taught on five different continents. On the University of Iowa's campus, he's taught in the Carver College of Medicine and College of Liberal Arts and Sciences as well as serving as the dean of education.

"I have trusting relationships with our faculty, staff, and student governments," he said.

RELATED: Here are the Hawkeyes, Cyclones and Panthers who could get picked in the 2021 NFL Draft