The district says they haven't recorded a new positive case of Covid-19 among students in two months. Local health officials are more wary. 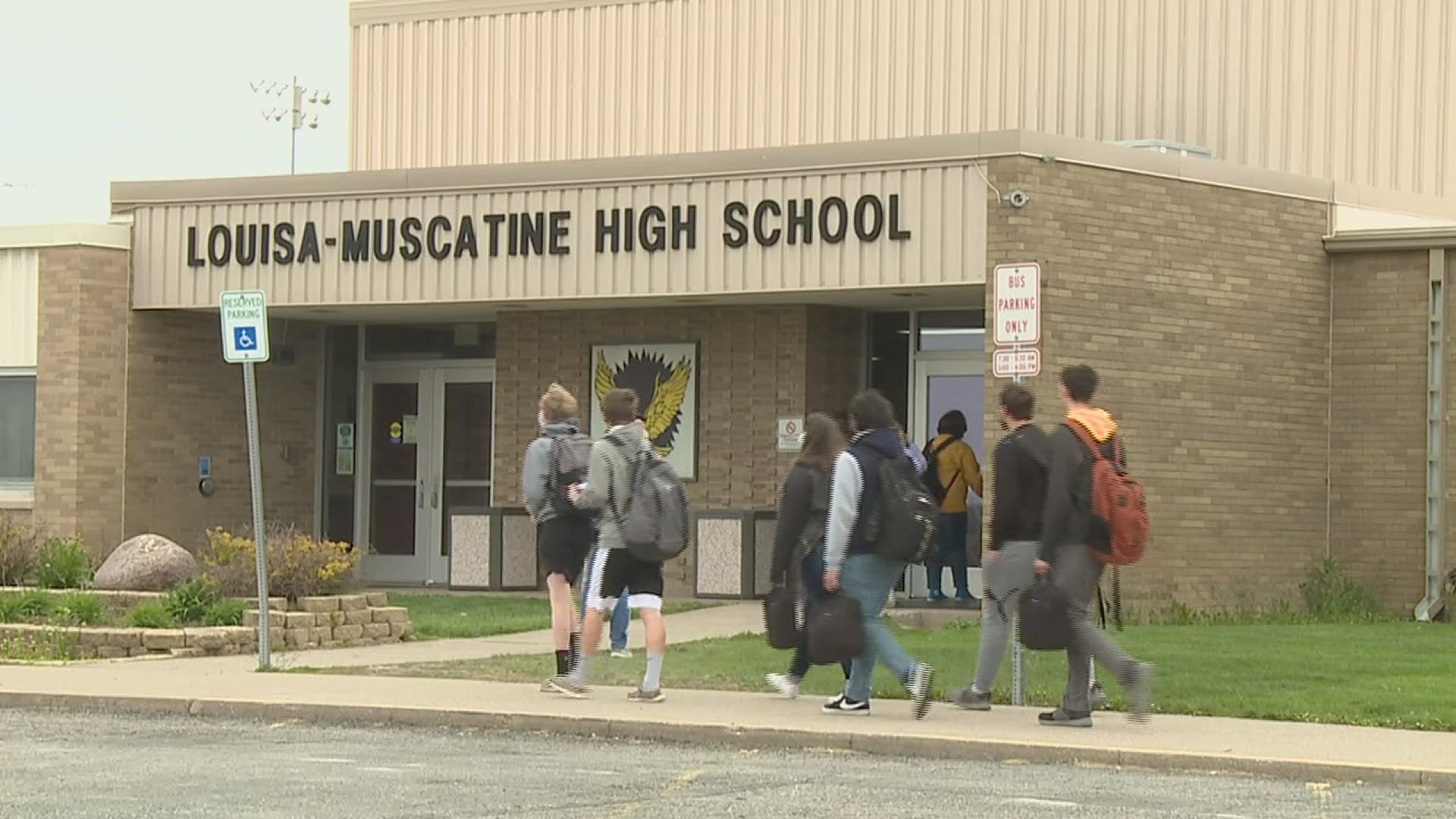 LETTS, Iowa — Beginning Monday, April 26, the Louisa-Muscatine Community School District started recommending, but no longer required masks to be worn by staff or students while at school or on buses.

If 20 or more students or staff throughout the district are in quarantine at one time, masks will have to come back for at least a week, until that number drops to 17. In a district of about 1,000 staff and students, 20 people is approximately 2% of Louisa-Muscatine's district population.

The decision was made by the school board after examining information and recommendations from health officials. Louisa-Muscatine has had a mask requirement in place since mid-November.

In an email to News 8, Superintendent Mike Van Sickle said the requirements for masks were altered "to be reflective of the health status of the district. In addition, the District remains committed to evaluating local conditions on an ongoing basis and following public health recommendations."

The district has not reported a new positive case of Covid-19 among students since March 8th, nor among staff since February 1st.

Following the announcement, the district said they are still actively monitoring Covid-19 positivity rates in both Muscatine and Louisa counties, as well as keeping their own district Covid tracker active on their website.

Some students, like 15-year-old student Makenzie Allison, are glad to have the option to take off their masks, especially during more strenuous classes.

"We have to do everything in the masks like gym, strength, fitness... it's just tiring," she said.

Allison says she's not worried about getting sick herself, since she's been quarantined three times since the pandemic began, including once when an immediate family member was sick, but hadn't had any symptoms herself.

"I don't get sick. I don't know, sickness doesn't really bother me. Even if I did get sick, I'd get over it," she said.

Junior Zach Robertson was a little more cautious, but still agreed with allowing students the option to decide for themselves.

"There's some pros and cons about it," he said. "Pros, you don't have to wear it. It was pretty hard to breath and do strength and conditioning and P.E. And then some cons is people might actually get [Covid] again. But that's why, for me, I'm gonna keep the mask on me. So if I feel like it's too crowded, I'm gonna wear one. But then if I feel like I'm distanced from people, I'm not gonna wear one."

Robertson said that among his friend group, it felt like Covid had died down a bit from when the pandemic first began.

"Everyone's getting the vaccine, if they can can. So yeah, I think there will be some [spread] but not as much as when we first started school," he remarked. "Everybody kind of likes that they're lifting the requirement."

And Louisa-Muscatine isn't the only district to make the move in the area.

Just eleven miles away, the Wapello Community School District lifted their own mask mandate back on April 19th. Superintendent Mike Peterson says so far, they haven't had any issues.

"You know, we really haven't had any problems," he remarked. "We looked at the positivity rate in the county and the transmission cases in the school. And the board got to the point where it was decided, you know what, they feel comfortable doing this, so we went in that direction."

Peterson said one of the biggest worries he was hearing about keeping mask requirements had to do with discomfort, especially as summer approaches in a district without all air-conditioned buildings.

"The biggest concern is are we gonna have large numbers of people who end up in quarantine," he added. "Before we went to the mask mandate, we did go through a stretch where we had quite a few students and staff in quarantine and I think some people are afraid that that might happen again."

Wapello doesn't have a set threshold for when they might reinstate the mask policy, like Louisa-Muscatine's 20-person quarantine count. Instead, the district says they plan on monitoring the situation as it evolves, and making a decision if they begin to see high quarantine rates throughout their buildings.

Both school districts tell News 8 about half of their respective staff populations were vaccinated at on-site clinics a few weeks ago. It's estimated that more have since received shots at their own appointments.

Online, Iowa's statewide Covid-19 positivity tracker shows that Louisa County is doing remarkably well with their current case numbers. As of Monday, April 26th, when Louisa-Muscatine dropped their mask requirement, the county had reported no positive tests over the last seven days, and was showing a 0% positivity rate.

Just to the north, Muscatine County had been fluctuating a bit more, going from 10% positivity just a few days before the new policy went into place, to just 6% the day before, on April 25th.

"The data that we have is only as good as the input that's given to the state's data system," explained Christy Roby Williams, Director of Muscatine County Public Health. "It's not going to be 100% accurate to tell us the story of what's currently going on."

RELATED: Meet Megatron: The machine, and the East Moline man behind it, helping out after disaster

She said that a severe drop in testing for Covid-19, combined with pharmacies and health departments overwhelmed and focused on vaccine rollout, is most likely causing many positive cases to go underreported.

"From the view down a level, we know when you dive down deeper to a local public health area, what we're seeing and experiencing is an increase in cases. We're seeing an increase in students in the schools," said Williams. "We know that the variant is in Iowa. And we will continue to be conservative in the space of recommending precautionary measures that we know to be affective in public health to reduce the spread of infectious diseases."

Williams went on to explain that while many teachers have already received vaccinations in Iowa, the shots are still not open to most school-aged children. And with the new variants of Covid-19 present in the state, she says now is more important than ever to be vigilant about mask wearing and hand washing for young people, and warns against school districts relaxing mask requirements.

"We're seeing an increase of adolescents and youth getting Covid-19. So we will continue to ask that our schools partner in wearing masks and not dropping any mask mandates in any school districts."

She says the more that students get sick and spread the virus amongst their communities, the more time they'll need to spend quarantining away from school, and/or the more time family members might spend sick or in the hospital. As Williams puts it, it's a ripple effect.