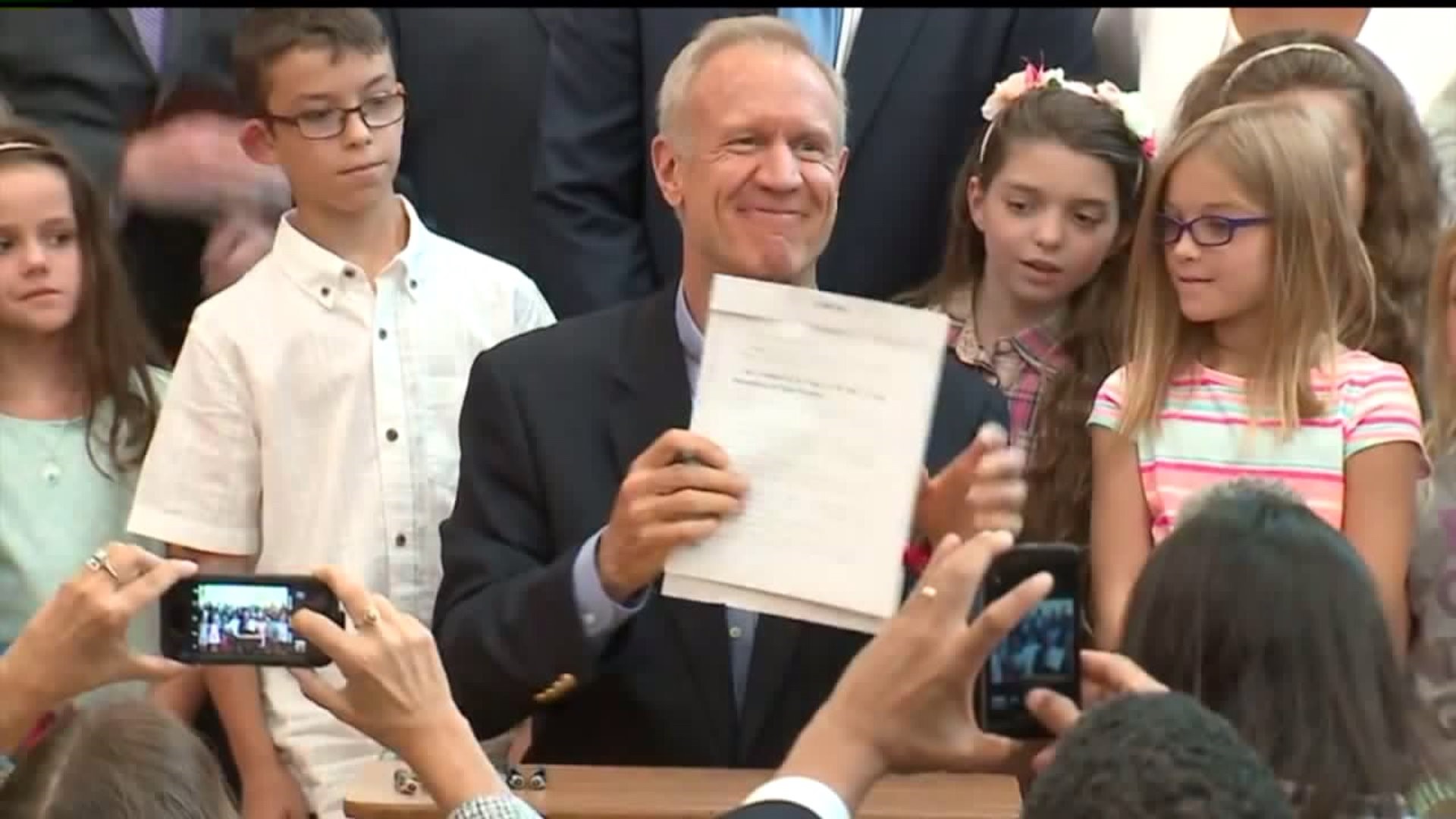 CHICAGO (AP) — Illinois Gov. Bruce Rauner on Thursday signed into law sweeping changes to the way the state funds schools, calling it a historic day that will bring "more equality, more fairness and better opportunity for all the students of Illinois."

It also provides more than $430 million in new funding to Chicago Public Schools. That's roughly $150 million more than the amount Rauner stripped from an earlier plan and railed against as a "bailout." Asked Wednesday about the turnaround, the Republican said the measure is a compromise and includes "many of the goals I recommended."

Here's a look at the plan:

Under the new plan, Illinois will consider how much money districts need to adequately educate their students and how much money they can generate from property taxes. State aid will be prioritized to districts that need the most help bridging the gap between those two numbers.

No school will lose money this year compared with last year.

The state will begin covering the cost of pensions for teachers in Chicago, just as Illinois does for all other districts.

Chicago Mayor Rahm Emanuel and the Chicago Democrats who lead the Illinois House and Senate have lobbied for the change for years, saying it's unfair that Chicago taxpayers have to foot the bill for their teachers' pensions while also paying taxes that fund pensions outside the city.

The change means the state will pay $221 million for CPS pensions this year, up from about $12 million last year. CPS also is getting additional state aid, and legislators gave the board of education authority to raise at least $120 million more in additional property taxes, also to help with pension costs.

The new law provides relief from so-called unfunded mandates, something Rauner has wanted to scale back since taking office in 2015.

Illinois officials have bragged that the state was the first nationwide to require daily PE classes under a decades-old law, something educators argue is more critical than ever with widespread anti-obesity efforts. However, the Illinois State Board of Education says most districts offer only four days a week on average. Schools say they often don't have staff or facilities.

The new law cuts the requirement to three days a week.

Rauner has made reducing property taxes one of his top priorities, saying Illinois property owners have one of the highest tax burdens in the U.S. and it's causing people and companies to move elsewhere.

The new plan allows people living in school districts where funding is more than 110 percent of the adequacy target — essentially wealthier districts with large cash reserves — to try to have their property taxes reduced.

Ten percent of a district's registered voters would have to sign a petition to put a question on the ballot.

The plan creates a tax credit for people who donated to a private school scholarship fund. Up to $75 million in credits may be granted annually starting next fiscal year, though lawmakers haven't yet identified a way to cover that cost. The program will expire after five years unless lawmakers extend it.

Lawmakers say it will provide scholarships for between 6,000 and 10,000 students statewide. The students must come from households with an annual income below 300 percent of the federal poverty level, or about $73,000 for a family of four.