A man known for jumping on the backs of players at sporting events was arrested at a local grocery store. 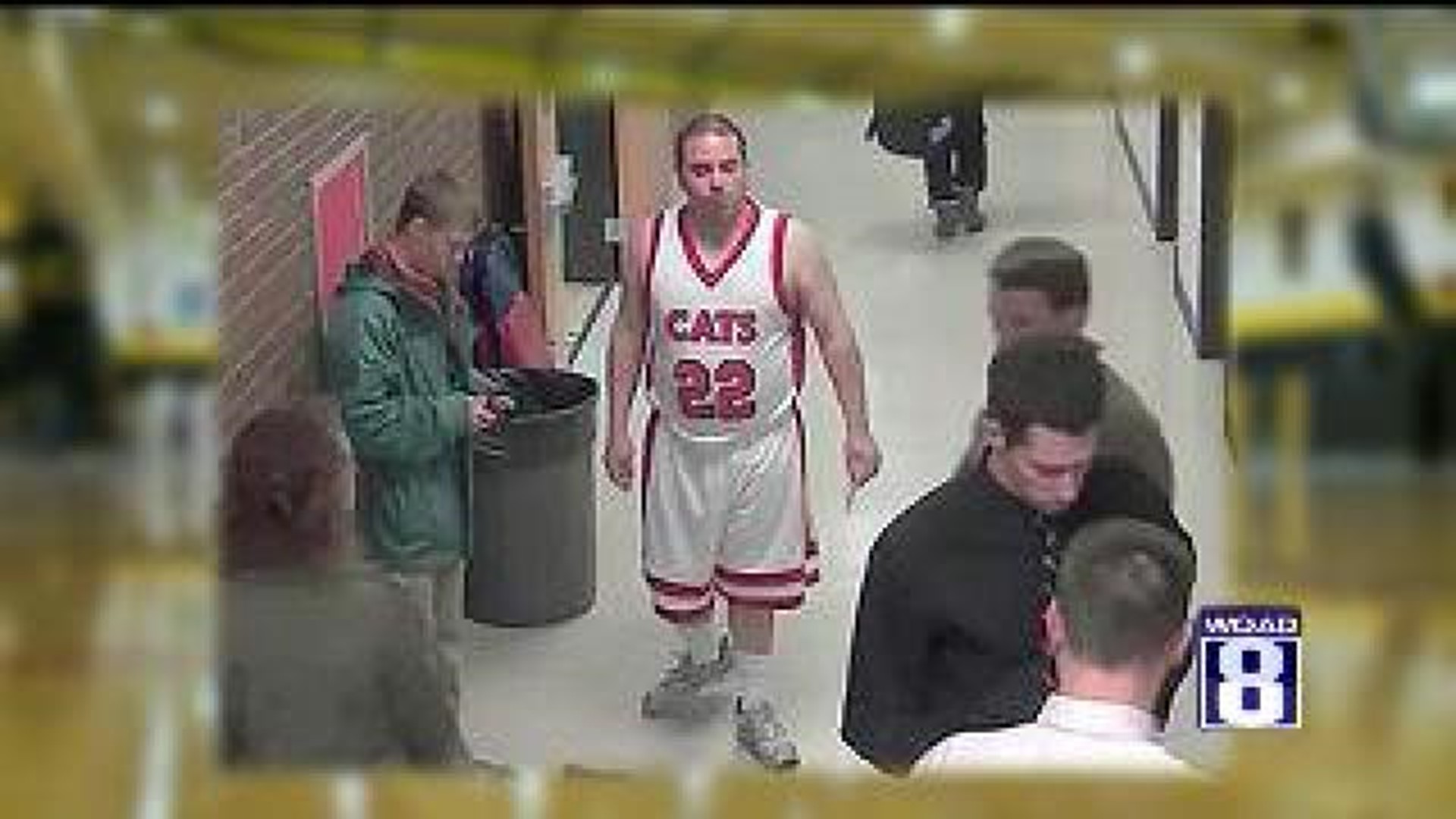 A man known nationwide for jumping on the backs of players at sporting events was arrested at a local grocery store.

Sherwin Shayegan, 29, spent about 15 hours in the Scott County Jail after he was arrested Thursday afternoon, January 31, 2013 at Schnuck’s, 858 Middle Road in Bettendorf, Iowa.

Police said a manager of the store told Shayegan several times to leave after he was “causing a disturbance and trying to steal a customer’s food.”  Shayegan reportedly made loud noises and shouted inside the store, interrupted store employees and told them how to do their jobs.

Despite being told to leave and stay out of the store, Shayegan reportedly went back into the store and stayed there.

Jail records show Shayegan was charged with misdemeanor criminal trespass and misdemeanor disorderly conduct.  He was released on his own recognizance in lieu of $300 bond Friday morning, February 1, 2013.

Shayegan, who is from Bothwell, Washington, is also known as the “Piggyback Bandit” because he shows up at sporting events and has a reputation for doing whatever he can to get near players so he can hop on their backs for a piggyback ride.

Deadspin.com reports Shayegan’s parents say he has Asperger syndrome and is obsessed with athletes, but that he is harmless.  He has been banned from high school athletic events in five different states – Washington, Oregon, Montana, North Dakota and Miinnesota  -  because of his antics.

Shayegan reportedly jumped on the back of a person wearing an orange Illinois jersey in Champaign, Illinois after a game in September 2012.

More recently, Shayegan was banned from Black Hawk College in Moline, Illinois after he reportedly jumped on a player’s back at a basketball game Tuesday, January 29, 2013.

WQAD interviewed the Head Coach of Black Hawk College's Men's Basketball Team, Darren Bizarri, on Friday, February 1, 2013. He says he first noticed Shayegan sitting in the bleachers during the woman's game, which took place before the men's game against Carl Sandburg College on Tuesday.

"He had a red shirt on and I assumed he was with Carl Sandburg or a fan of theirs," says Coach Bizarri. "In between games, he walked behind the Sandburg benches and started filling water cups so I thought they had a manager or someone helping them out."

"He was taking their warm-ups and folding them up... everything a manager would do. He sat right next to the scores table with a stat sheet, so we figured he was charting fouls or something. Nothing probably would have been said until after the game when we had an incident."

That's where Cody Cooley, the Braves' Power Forward, comes into the story.

"He came into the locker room after we were changing and he said he wanted to take a picture with me and I said that was fine," said Cooley in an interview with WQAD on Friday. "Then he said for the picture that he wanted to get on my back and I was thinking it was kind of awkward, but I said that's fine and he got on my back."

"Then, he knocked on the door to the officials' locker room, made a derogatory comment to them, and ran away," says Coach Bizarri.

Coach Bizarri says he called Carl Sandburg's coach to tell them about the incident.

"He asked me who I was talking about. I said - 'The guy in the red shirt that was behind the bench the whole game' - and he said he had never seen the guy before. He thought Shayegan was with Black Hawk College and the Braves were supplying a manager for their team."

Between that incident and Shayegan's arrest two days later, Bettendorf Police Captain Keith Kimball says there was also a disturbance at Muddy Waters, a bar located on State Street in Bettendorf, on Wednesday, but no charges were filed at the time. Capt. Kimball says Shayegan then went to the Isle of Capri to reserve a room, but was unable to provide proper identification.

On Thursday, Capt. Kimball says Shayegan was asking for food and money at the McDonalds in Duck Creek Plaza, then walked over to Schnuck's, where he was later arrested on disorderly conduct and criminal trespassing charges.

Despite his strange behavior, Capt. Kimball doesn't think he's a threat to the community. However, the Bettendorf Police Department has notified area colleges and high schools so that they're aware of the situation.