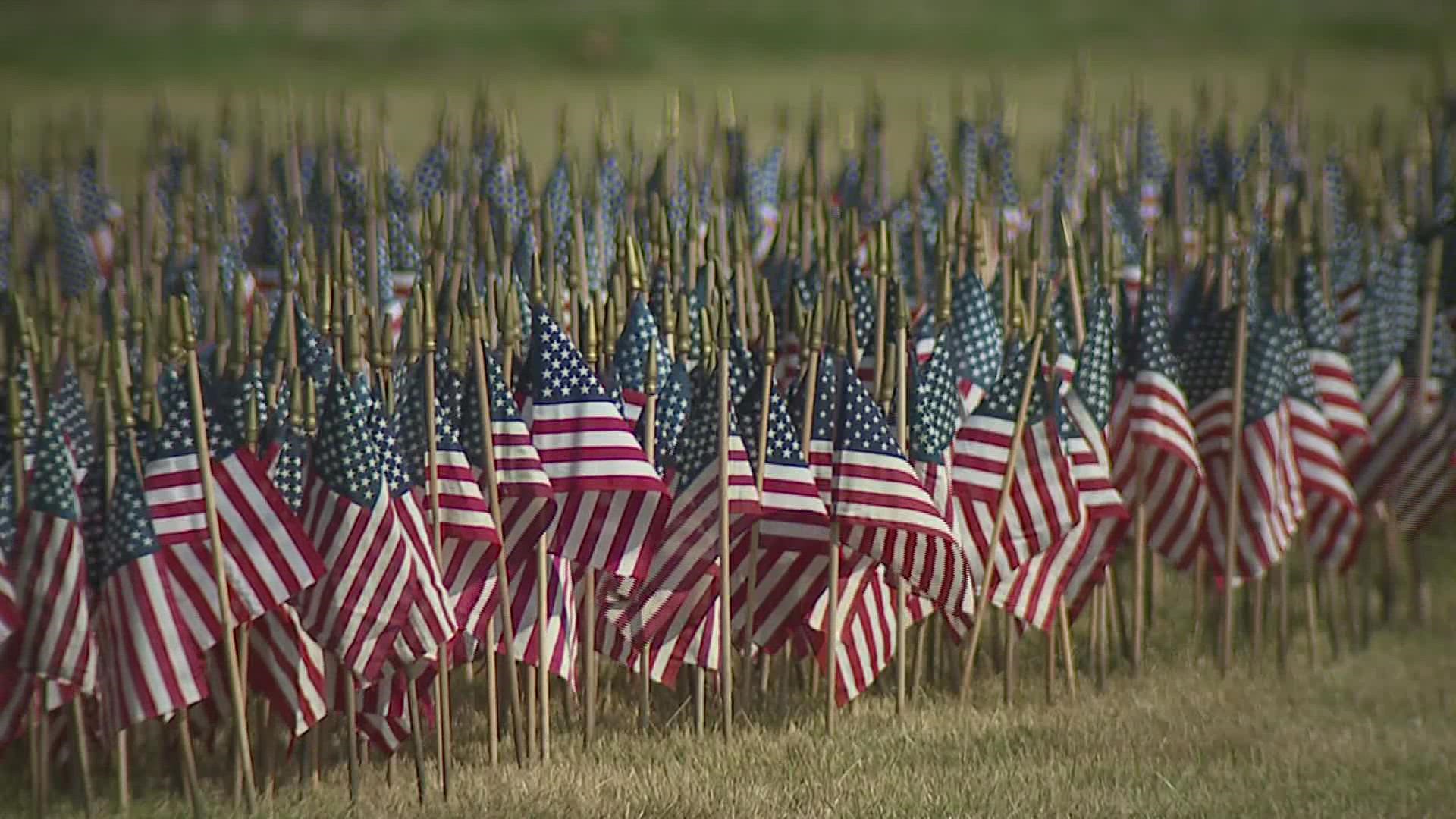 "It would probably be disingenuous of me not to acknowledge this year's anniversary as somewhat of an additional, emotional association with it," said Stephen D. Blake, retired command sergeant major. "The hardest speech I'm ever gonna give, is today. And why? Cause I care."

The morning saw a 21-cannon salute, the playing of the taps, as well as songs from fifth graders at All Saints Catholic School in Davenport. There was also a special laying of the wreath ceremony from the Brenda and Leonard Luxmore, a gold star family from New Windsor.

"[It] read, 'If you don't live for something, you will die for nothing,'" quoted Maj. Blake. "He lived and died for all of us."

You can visit the family's memorial page for B.J. here.

Throughout his speech, Blake asked what word would best describe the legacy of those who died from the attacks in 2001.

"I ask myself what word would describe their legacy. Their self sacrifice that we so humbly honor. And I’m telling ya, the word is courage," he said. "The courage of our firefighters and medical technicians. They kept climbing for hundreds of stairs. Burdened with equipment. Legs burning, to fight fires and reach those who were trapped in a burning inferno, only to comfort them, even at the loss of their own life. The courage of our police officers who charged into smoke filled buildings to secure and rescue and warn others. The courage of our service members and civilians at the pentagon who rushed through the thick black smoke and fire to try and save their buddies. The courage of the airline passengers when all appeared to be lost, to choose to simply reach out a hand of compassion and comfort to one another and made their last calls."

For many at the service, it wasn't hard to remember exactly where they were when they heard about the attacks. But some of the youngest attendees from All Saints Catholic School weren't even alive at the time.

One fifth grader, Brayden Gwin, said while he was a bit nervous to perform at Friday's memorial, he walked away with some new lessons.

RELATED: 9/11 remembrance events in the Quad Cities for the 20th anniversary

"I learned from this ceremony that we should speak up and not be silent and try our best in everything," he told News 8. "It feels like I'm really a part of something and that's a nice feeling."

"While September 11 is important that we remember, I would submit to you that we need to help our next generation, remember - and I talk about this to soldiers all the time - is remember September 12," he said.

Lt. Gen. Aguto stressed the importance of remembering the united feeling the country took on, following the attacks.

"Remember what happened when we did and the resolve that we had to protect our own and protect our own freedoms. That's what I would recommend we teach our next generations," he said.

Now, two decades after 2001, the country is once again celebrating memorials with the backdrop of news out of Afghanistan. It wasn't lost on Lt. Gen. Aguto, who was deployed to Kandahar for nine months.

"We had Afghan friends and interpreters. As the [recent] events unfolded, all of us got on the same text and started talking to each other, trying to find our interpreters. It took a few days, but we did. They're back in California and they're find. Raising kids. Matter of fact, the discussions now are about college, not about Afghanistan."

Within there, Lt. Gen. Aguto says he still has hope, twenty years on.

"There is a hope for folks that we had made friends with. We had been in Afghanistan for many, many, many, many years," he noted. "There's a resolve that we are Americans and we are here to help. And we want to help. It's not just resolve, it's a look of hope."