Realtors are seeing a bottleneck effect on houses, with more people looking at the same time that inventory reaches new lows. 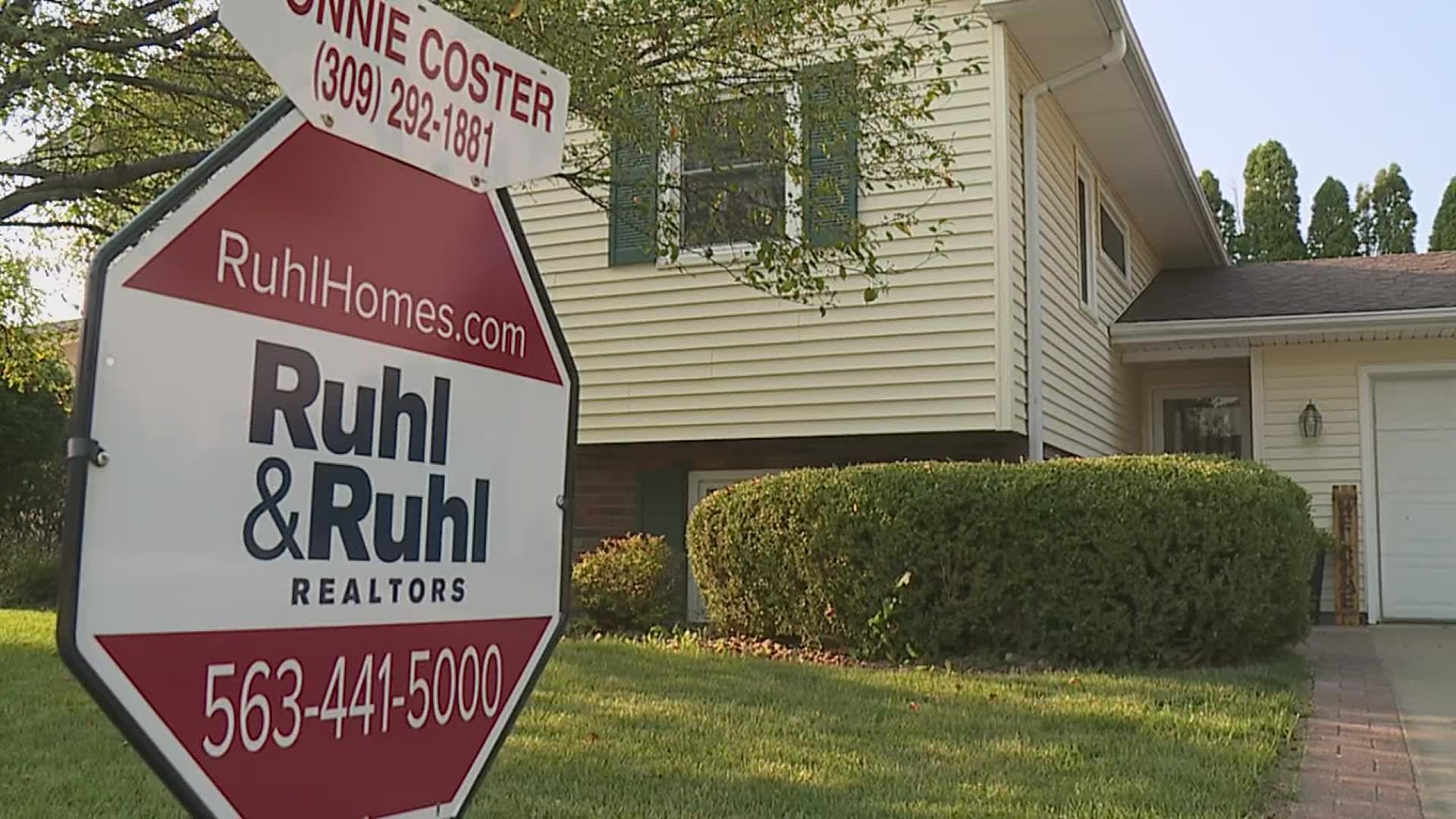 MOLINE, Ill. — House prices are up, across the country and in the Quad Cities. For local realtors, house prices are hitting 15-year highs at the same time that inventory is at a 16-year low.  It's being called a 'seller's market.'

Ruhl&Ruhl Realtors say while a balanced supply of local inventory would have four to six months of houses, the Quad Cities as a whole has just over a month of inventory right now. Houses ranging from $200,000 to $250,000 are most in demand, locally.

"You literally could have five, six offers at one time," said Connie Coster, a Realtor with Ruhl&Ruhl. "I don't believe we've seen this in the Midwest probably in 30 years."

She explains that because of the current market, buyers are often waiting to find a house they want before listing their own on the market, creating a situation where there's nothing to buy.

There's also a large group of first-time homebuyers that are now ready to move up, creating an incredible demand in that second-home market.

All of that means that she'll get two to three, sometimes even fix or six offers on a house after just a handful of showings.

"I'll tell you, for the first time in 20 years, I'm seeing dual offers over asking price. Almost on every home now, we're seeing over asking price if they're priced correctly to begin with," said Coster. "Say you only have $100,000 to spend - be looking at $90,000 - $80,000 houses, and make sure you and your realtor have an escalation clause in your hand when you're looking at a home."

Now, the only way she sees this situation slowing down is if buyers start listing their own homes while they look.

"What I suggest people to do, go ahead and get your house listed, make it contingent on you finding the home of your choice. And that way that would open up this bottleneck, we’d get a whole lot of inventory. And then I think we’ll see prices at that point, start to level out when the inventory comes back to us."

It's a situation that helped Miguel Rosas sell his house in Moline for much more than the asking price.

"We had it listed for two days," he said. "And I think within three days we had two offers. One was right above the listed price and the other was about $12,000 more. And the next day they even threw more on top of it."

Rosas and his family ended up selling their house for $10,000 more than the listed price, which was nearly 25% more than what he originally paid for it.

But the entire process moved incredibly quickly. Between contacting a realtor, making necessary upgrades to the house, and finding a buyer, it was only a two-week process.

"It was crazy fast," laughed Rosas.

But looking at housing prices also means looking at the larger picture, according to Chris Beason, President of Ruhl&Ruhl Realtors. He says while prices are increasing at rates he hasn't seen since 2006, it's also all relative.

"There's a key measuer I think we need to take into consideration," he told News 8. "That's the housing affordability index. That doesn't just look at the home price, but it also factors in your median income, interest rates and home prices. It takes in a bigger, wider picture."

RELATED: Galesburg will finish replacing all of its lead pipes by next fall

Beason says despite the price highs, as of May, it was still one of the most affordable times to buy a house, thanks to low interest rates and the rise of median income.

"We don't have the double digit price appreciation that you see across the country - we're a little bit more consistent, a little slower and steadier, which is great," he said. "We don't have the huge peaks, but we'd also don't tend to get hit by the valleys that tend to follow."

Generally, he says the appreciation in local markets is fairly sustainable, at 7-9% year over year.

"Home appreciation at that percentage means if you had a $100,000 house a year ago, that could be $107,000 in today's market," said Beason. "It's all based on supply and demand and the lack of the more affordable properties that are being put on the market, and the increased demand for those properties, is causing bidding wars and multiple offers and thus the prices are appreciating."

While it's difficult to predict when this seller's market will begin to slow down, Beason says the key is relying on that housing affordability index.

"As long as the median income growth is there, the home price appreciation will be there also. And interest rates are key right now. That has a lot of weight on what the average homeowner can afford."

Beason calculates that a 1% change in interest, for the same monthly payment, impacts buying power by 10%.

Latest numbers from the Mortgage Bankers Association project about a half percent increase by the end of the year, as well as another half percent by the third quarter of next year. It's a rate that Ruhl&Ruhl calls slow and steady.

And when it comes to the possibility of another housing market bubble? Beason says he's not worried.

Coster agreed, saying once the local bottleneck starts to open up, inventory will balance itself back out and prices will begin to level out.

"We don't know when that's gonna happen. The government's kept the interest rates very low. They you know, have kept giving stimulus money. I don't know when it will end but right now," she said. "The sellers should enjoy the ride. Because it's a very good one."