"We're gathering picket supplies" | John Deere employees brace for a strike, ahead of a looming deadline

Negotiators for the United Auto Workers Union have until 11:59 p.m. on Oct. 13 to come to an agreement with Deere, extend the deadline again, or authorize a strike. 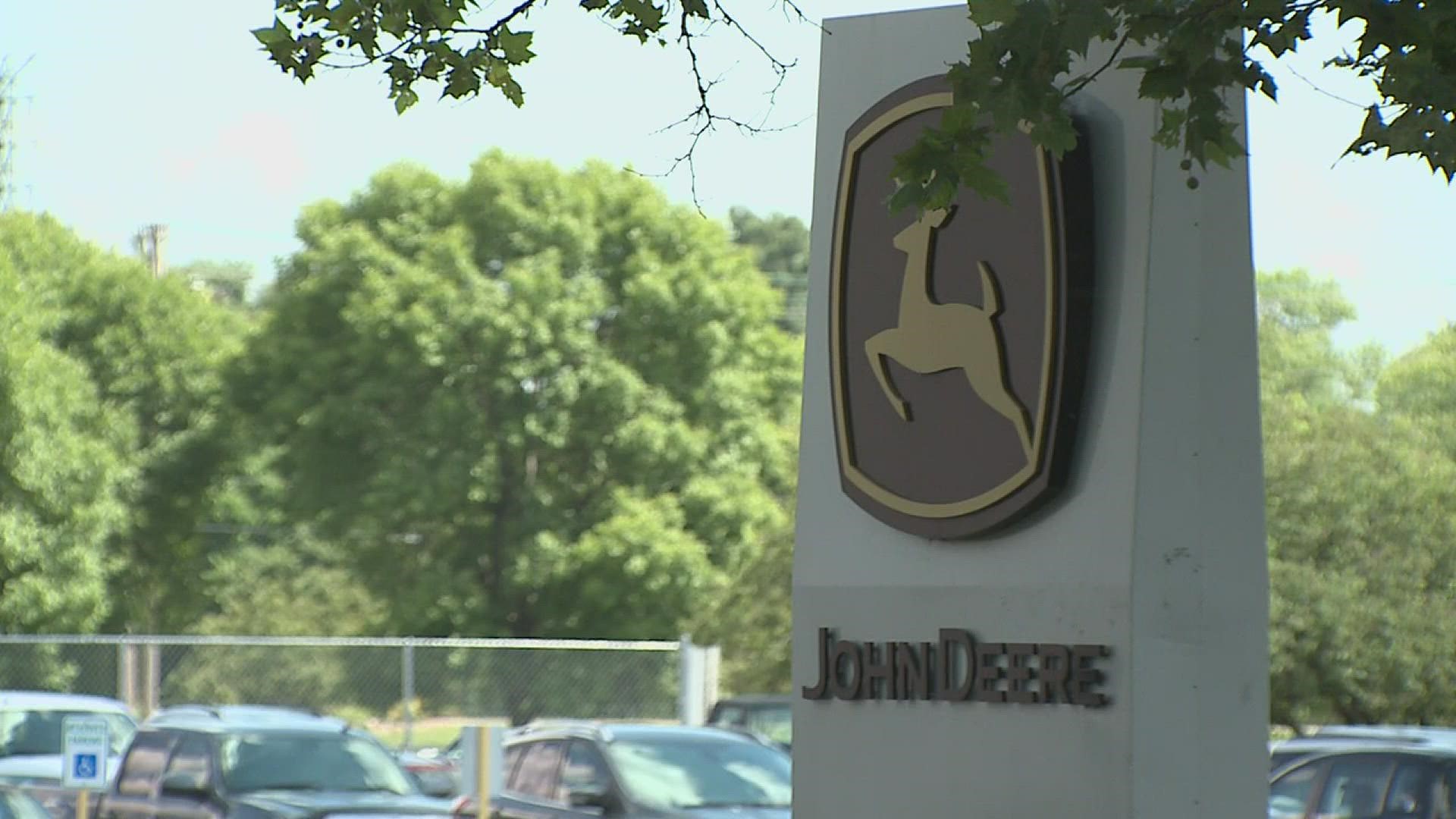 Negotiators for UAW are back at the table with Deere executives, after an agreed upon contract was voted down by nearly 90% of union employees. A strike deadline is set for 11:59 p.m. on Wednesday, Oct. 13. If a new agreement isn't found by then, union leaders can either extend the deadline again, or authorize a strike.

Union members had previously voted for strike authorization by overwhelming margins earlier this fall. This all comes just six years after the previous contract between Deere and UAW passed the approval cutoff by less than 200 votes, out of 10,000 eligible voters.

Not much is known about the current state of negotiations. Representatives from both Deere and UAW have not commented on where they are ahead of Wednesday's deadline.

But, union workers tell News 8 they are ready to join the picket line, if it comes to that, on Thursday morning. One member from the Quad Cities said his chapter had already begun gathering strike supplies and sending out plans on Tuesday afternoon, anticipating that no agreement would be reached.

Another worker from northeast Iowa said, "We are all ready to go. Supplies are ready at all sites."

That same laborer reported salaried employees at Deere had been given strike 'marching orders' by Tuesday evening, with job assignments and tractor assembly tasks already doled out.

Multiple union members told News 8 on Tuesday that the company had already begun posting closed signs on gates and setting up barriers, and had canceled Wednesday night's third shift crew.

"Second shift will leave [on Tuesday] and they will lock the doors and strike duty will start at 7 a.m. on Thursday morning," said one worker.

By the end of this fiscal year, Deere & Company are projected to report nearly $6 billion in profits. It shatters the organization's previous record, set in 2013, by 61%. During the pandemic, CEO John May's salary rose to $15.6 million.

"If the company is doing well, then workers expect that they will share and reap some of that benefit as well," said Michael Childers, a professor of labor education at UW Madison. "Workers don't necessarily want to be without a paycheck. But they do want to make their voice heard with their employer."

He added that the impacts of such a strike, if it occurs, will be felt across the region.

"There's 10,000 family decisions being made right now," he said. "The implications for employees at Deere are grave, but the implications for the community are just as important. To the extent that these workers lose benefits, it becomes more likely that everyone in these communities and the Quad Cities and beyond, will struggle to find employers that provide this level of benefit."

And employees report feeling just as frustrated and tired with UAW leadership as they are with Deere. One forklift driver, who's remaining anonymous for her safety, said she doesn't want another negotiation extension - she wants to strike.

"Everyone is tired of the crap. The mood is just everybody wants to strike," she said. This employee said if the union doesn't authorize a walkout by Thursday morning, she and many of her colleagues will be calling off. "We feel like the UAW is not for us anymore. And we don't feel the local leadership is any better."

If workers go on strike, this employee says she'd earn about $275 a week in strike pay, which is roughly a third of what she's currently making. She says while her family has saved up money for this instance, she's worried about new, younger employees who don't have much to fall back on.

She claims it's also partly to blame for why union members voted down the first contract offer. Under the proposed agreement, any employees hired after Nov. 1 would not be allowed on the same pension program as existing workers. Instead, they'd be enrolled in a 401(k).

"I believe in putting into a 401(k) but too many families here can't afford to do it. Especially at a young age," said the worker. "When you're living paycheck to paycheck, you can't afford to put money away for that. And there's a lot of new employees and single parents here that can't afford that."

Even if UAW negotiators extend the strike deadline, this particular employee says she, as well as many of her colleagues, will be calling in on Thursday regardless of the outcome.

"We all just need to stick together and fight for what we want," she said.

Another employee, also remaining anonymous, said on Tuesday evening he doesn't believe this fight should have gotten to this point in the first place.

"We aren't asking to be millionaires, we are asking for fair wages, a pension and post retirement healthcare," he said. "After 30 years or more of giving your body to a company moving 1,000 pound castings around or assembling tractors, it rips your body apart. It's not unreasonable to not want to have that worry in life of 'what if?'"

He argues that if employees hired before 1997 have such benefits, why don't the other workers. And he says that after years of being given unsatisfactory contracts by union leaders, he's just as fed up and disillusioned with UAW as well.

Another employee agreed, remarking that it's been odd gaining national attention for the potential strike, especially as UAW international has been rather quiet about the process on its own website and social medias.

The worker, employed at Deere for years, still doesn't feel any security from the company. He told News 8 that union members couldn't vote for the previous contract when it had "little to nothing in it for us" while executives from Deere continue to try and fill hundreds of open jobs.

"The company complains that they can't hire skilled trades and the ones that they are hiring either aren't sticking around or are coming up on the end of their career. It's frustrating. I've been with the company just under a decade and can barely hold third shift, with no sign of day shift for at least another decade," he said.

However, several workers did note the process had brought union members closer to one another. Turnout at Sunday's contract vote reached into the 90th percentile for chapters like Waterloo. Multiple employees say these last few weeks have strengthened ties between their fellow UAW members in ways they didn't think was possible.

"This is the first time in a decade I've been proud to be part of this union," remarked one employee, mentioned above. "For our members, my brothers and sisters, because everyone is united, everyone has the same goal, and everyone is ready to fight for each other."

He added that as a third generation UAW member, he grew up on the motto of 'united we stand, divided we beg.'

"Somewhere through the years our leadership and international lost that," he said. "We've found it for them."