Modern Eagle Family: A trio of bald eagles, with two dads and one mom, raise chicks along Mississippi River

Star, Valor I and Valor II are expecting at least two chicks this spring. 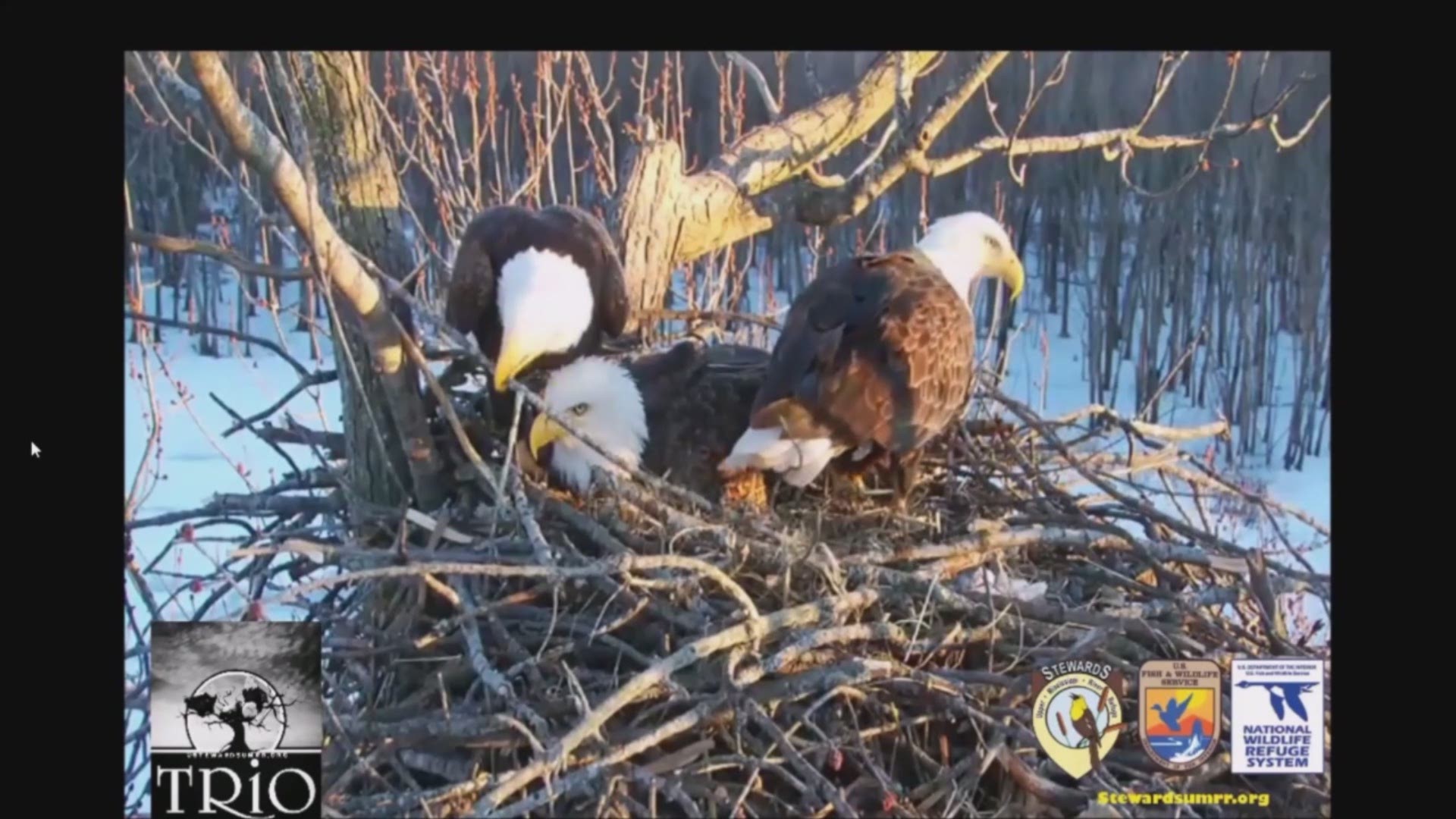 A trio of bald eagles living along the Mississippi River are part of a unique family -- with two fathers and one mom.

Their family's story, which can be streamed live online, starts with just two bald eagles, first mating back in 2012.

"He would come to the nest, sit down on the eggs for a while, then he would take off," Steinhaus says.

When none of their chicks survived, Hope moved on.

"She replaced him with another male," Steinhaus says. "We didn’t think Valor I was going to be in the mix, so we named him Valor II."

But Valor I never moved on, and he stayed in the area.

Fast forward four years, and the most unexpected thing happened. Valor I made his way back to Hope, and she took him back while keeping Valor II in the family.

Because of camera problems, the exact moment when the three decided to become a family didn't get caught on tape, but Pam says it happened between 2013 and 2016.

"Since we don’t have that (footage), we don’t know how (Valor I and Valor II) interacted, to say whether they did a dominance thing to say, 'Oh who’s gonna be the dominant one,'" Steinhaus says. "I don't know, that's a mystery that’ll probably never be answered."

The trio raised several baby chicks, but in 2017, tragedy struck the family.

"Hope was in a fight for her life," Steinhaus says. "It's more than likely that she was severely injured and probably died."

Valor I and Valor II stuck together, and Steinhaus says that without them, the chicks they had with Hope would've died.

"They get the father of the year award in 2017," Steinhaus says.

That's when the unexpected happened again -- Valor I and Valor II found a new mate, a female named Star.

"When Star came to the mix, that really threw me," Steinhaus says. "We didn’t know if a female was gonna come in or not."

She says there's a million questions to ask about the family, and not enough answers.

"One of the big questions is 'Who is the father of the eggs?'" Steinhaus says. "We have no idea who the fathers are."

Steinhaus knows that some things about the trio are very clear.

"They get along and they're bonded. All three are bonded together and bonded to the site," Steinhaus says. "(Because of) how they interact with each other -- sometimes I think us people can take lessons from wildlife."

Star, Valor I and Valor II are expecting at least two chicks this spring.