The Matherville Fire Department and Community Club put on the parade after Covid-19 cancelled their usual meet-and-greet. 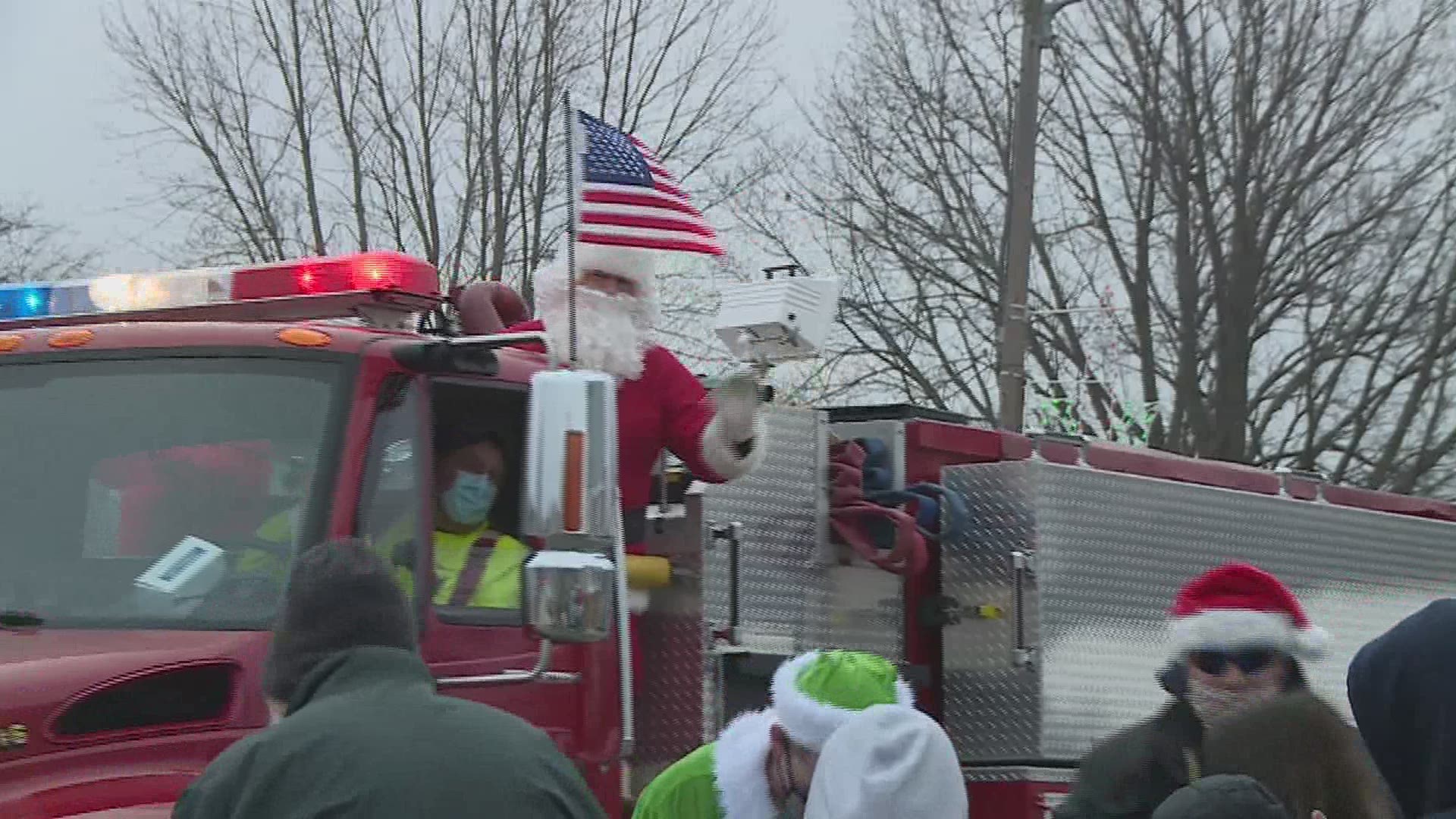 MATHERVILLE, Ill. — Christmas may still be a few days away, but on Dec. 19, the Village of Matherville held a special parade, because, as they put it, just because Covid-19 is happening, doesn't mean Christmas has to be stopped.

The parade was just a few trucks long, but featured a waving Mr. and Mrs. Clause, and elves and firefighters handing out treats to kids lining the main street of the small Illinois town.

"We wanted to give back to the community and spread some joy," said Adam McNair, a lieutenant on Matherville's Fire Department. "It's something, especially through this pandemic, we can bring to the table."

During a normal year, the department would host a Santa Clause meet-and-greet, complete with coloring and a bake sale. But after the virus hit, McNair said the department knew they needed to come up with something new. After a meeting with the Matherville Community Club, it was decided that a parade would be a perfect way to stay socially distant, while still letting area children (and adults) say hello to Santa.

The department is made up of 26 volunteers, and they rely on community donations to power their work. As Mariah Spence, EMS Coordinator and Safety Officer for the crew explained, events like this help make that bond even stronger.

"It's important to get all the kids involved with us. That way, if we do go on calls, they can see our faces and we're not seen as the scary people behind the mask. It's a lot better now that they're familiar and they're excited to see firemen from their community working with them."

Gary Day is another firefighter with the department. While he's been with various fire services for 27 years, he's been in Matherville for nearly 12 - and has gladly adopted the repeating role of Santa Clause.

"It's so special," he said. "One of the reasons I did not get off the truck today was because a bunch of kids would have come running up to see Santa, and we need to be safe."

Last year's meet-and-greet event drew about 40 people, according to the department. This year, those involved were confident the parade blew those numbers out of the water. Many families lined the street in front of city hall and the fire department. Even those who couldn't leave the house were given a little Santa fix, as the trucks quickly zig-zagged their way through most of Matherville's streets before beginning the parade route downtown.

"We try to wake up the whole town by going up and down the streets and reminding them 'Oh yeah, that's today,'" laughed McNair. His crewmates agreed, but also admitted the real reason was to ensure everyone could have a little holiday cheer, whether they came outside for it, or elected to stay indoors for safety reasons.

Of the many children lining the street, those who spoke to News 8 almost unanimously said they were most excited for one thing in particular: Santa.

"Because then I get to see what he wears," said one little girl, Tinleigh.

"It was fun and I loved it! I really liked it," said another girl, Freya.

And after such a long year, many admitted this was the only parade they had been to. Like Maylee, who said, "Everything's been closed down because of Covid so this is actually my first time being to a parade this year."

"I liked seeing Santa and it was really cool because he was saying Merry Christmas to everyone," said Freya's brother, Cohen. "We're never able to do anything so that was really fun to do this today."

For people like Meghan Shafer, coming out to the parade with her family was the perfect break from such an abnormal holiday season.

"We haven't been able to do any of that- those traditional things. So it's awesome that they've done that this year. It really just brings our little town together. We are doing really great on trying to evolve our different practices as the times are changing, and this is just a great way of showing we can still have those traditions... it might just be a little different this year."

As for next year, both Matherville's fire department and community club have a feeling that this unique new event will be one that sticks around.

"There was a lot of happiness brought by this parade," said Jennifer Richardson, a Firefighter EMR, said, "Seeing the joy in everyone's faces... I don't think this is gonna go away anytime soon."